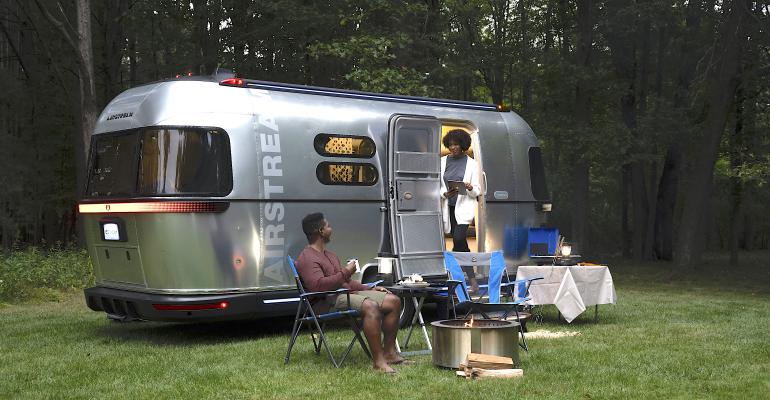 Airstream eStream concept.
This camping trailer has its own built-in electric drivetrain, which provides a surprising range of benefits beyond boosting the tow vehicle's driving range.

Airstream’s new eStream self-propelled electric camping trailer is a solution addressing numerous problems. The company was inspired to develop a trailer that can literally pull its own weight after Tesla introduced the Model X crossover SUV.

Airstream CEO Bob Wheeler reported that the electric SUV made Airstream contemplate what the company could do to mitigate the fact that trailer towing decimates an EV’s driving range. “It was inspired by customers,” he explained. “It goes back to the launch of the Tesla Model X. From that moment until today, we’ve been talking to customers that are towing today so we understand the pain points.”

Indeed, those pain points are plural, and the eStream targets them all. The reduced driving range for an EV pulling a camper is only one of the issues. There is also the matter of actually towing a trailer behind a family SUV and concerns about its stability on the road. Before that, there is the issue of hitching the trailer to the tow vehicle. When heading into the backcountry, an all-wheel-drive vehicle might be able to navigate the roads, but can it do so even while tugging a camper along behind it? And what about the need for campers to plug into shore power to maintain amenities that go beyond tent camping?

The eStream concept addresses all of these issues and more thanks to its use of an 80-kilowatt-hour lithium-ion battery pack and a pair of 330-volt, 40-horsepower (30-kilowatt) electric motors with the ability to surge to 120 hp (90 kW) each.

The eSteam is a 22-foot camper wrapped in the traditional sleek Airstream stainless steel skin. It is smaller than most of the brand’s campers and rides on a single axle, which is also related to the trailer’s accessibility for more users. It carries its high-voltage battery pack in the floor, between the camper’s frame rails, and nests the electric motors there too, in line with the axle. Inside, it sleeps four. 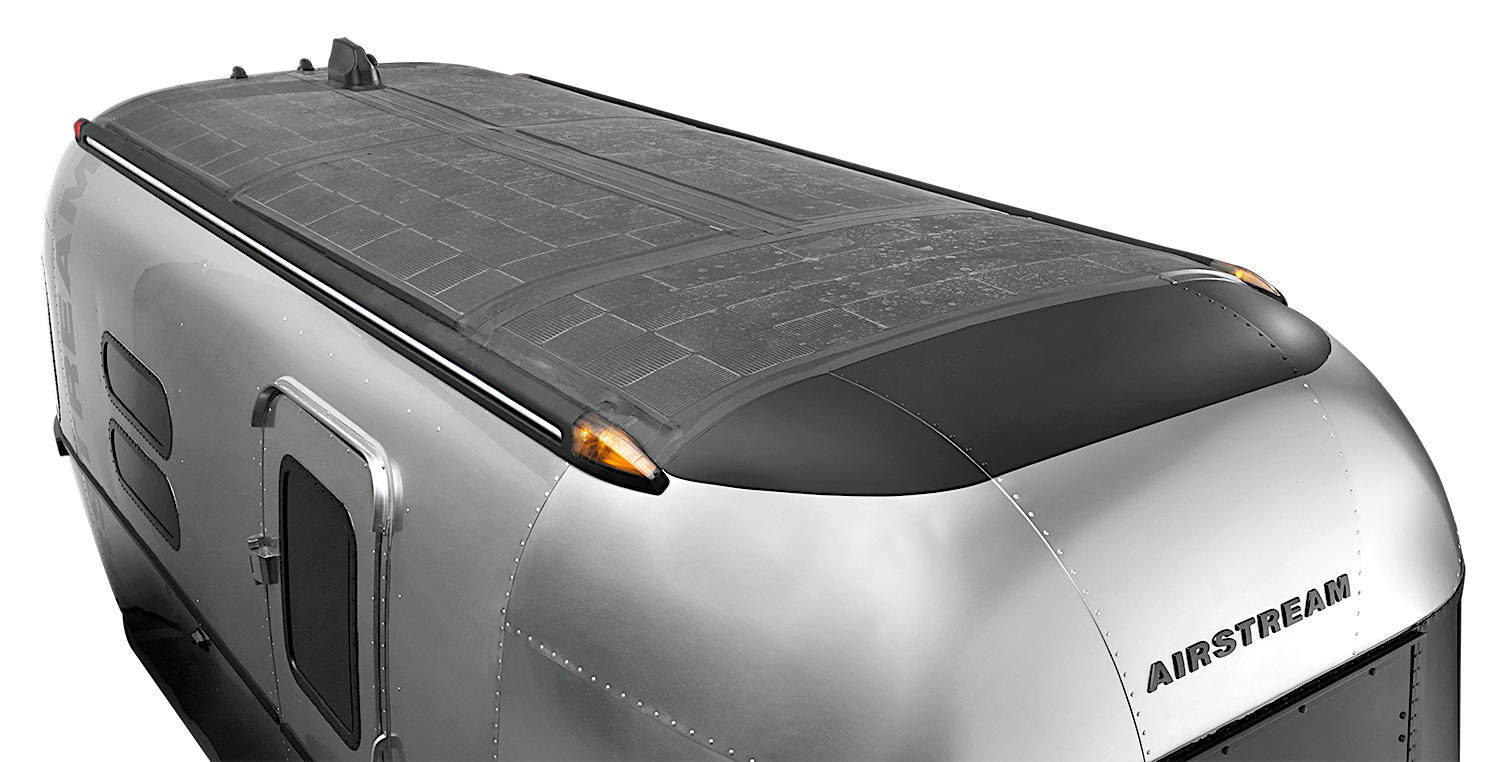 While all Airstreams are slippery, in keeping with their name, the eStream is especially so. That’s because it is 8-inches narrower than other models, reducing its frontal area. And because its roof is shorn clean of clutter such as the air conditioning unit, which also now resides beneath the floor. In combination, these tweaks trim the eStream’s aerodynamic drag by an impressive 20 percent, according to the company.

The eSteam’s roof is covered in solar panels that can produce a maximum of 900 watts of power in peak sunlight, providing a valuable recharge to the trailer’s battery pack. It has a conventional SAE J1772 EV plug for Level 1 and Level 2 AC charging and a Combined Charging System (CCS) plug for DC fast charging that can top off the battery in just 30 to 45 minutes, according to Airstream vice president of product development and engineering McKay Featherstone. 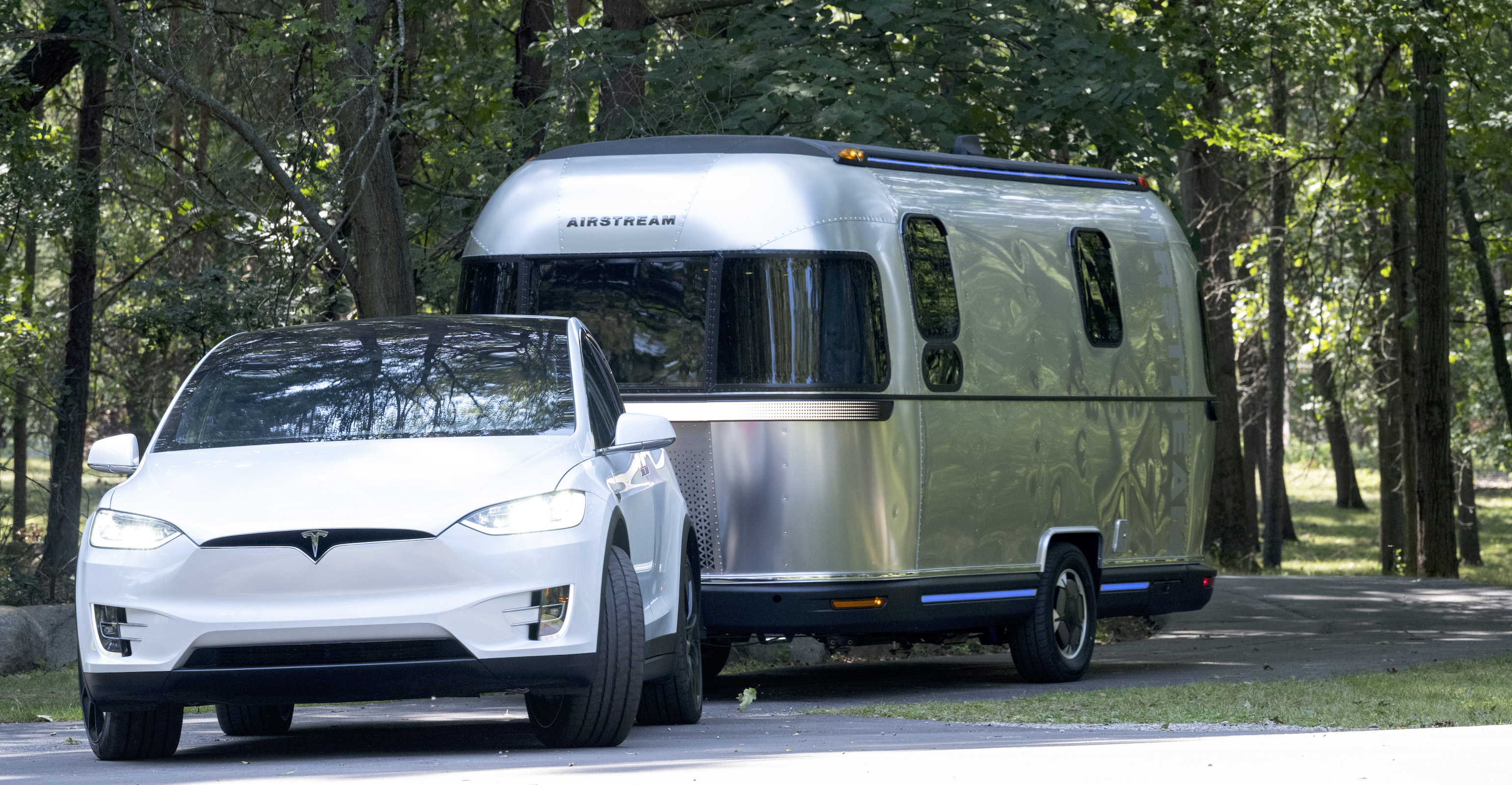 That covers the basic technology, but what really matters in the eStream is how this technology lowers barriers for new customers to buy an Airstream. A traditional big Airstream camper has two axles and is heavy enough to require a dedicated tow vehicle like a full-size pickup truck or SUV.

The eStream was conceived to make it possible for EVs like the Model X or a Ford Mustang Mach-E to be able to tow without draining their batteries in dozens rather than hundreds of miles. But this also means that other mid-size family vehicles are also suitable for towing the trailer.

The eStream has sensors in its hitch that tell the electric motors how much assistance to provide, so the trailer doesn’t provide any drag behind the tow vehicle. Just as importantly, the trailer automatically brakes itself too, using the regenerative braking of those motors when they recharge the batteries.

The drive system also provides electronic stability control, keeping the trailer from swaying. And having its own drive system means the trailer can help power its own way through slippery conditions, taking that burden off the tow vehicle.

This ability to move under its own power also means that drivers can guide the trailer using an app on a tablet. That means they can drive the trailer out of its parking spot and right up to the tow vehicle’s hitch for connection without any backing or a spotter needed.

Similarly, once at the destination, the trailer can drive into the parking spot without the driver having to back the tow vehicle with the trailer behind it. This eliminates a couple key sources of anxiety for beginning and would-be camper owners. “Backing a trailer is one of the most intimidating things for new customers,” Featherstone noted. “With one finger you can drive the trailer into a spot.” 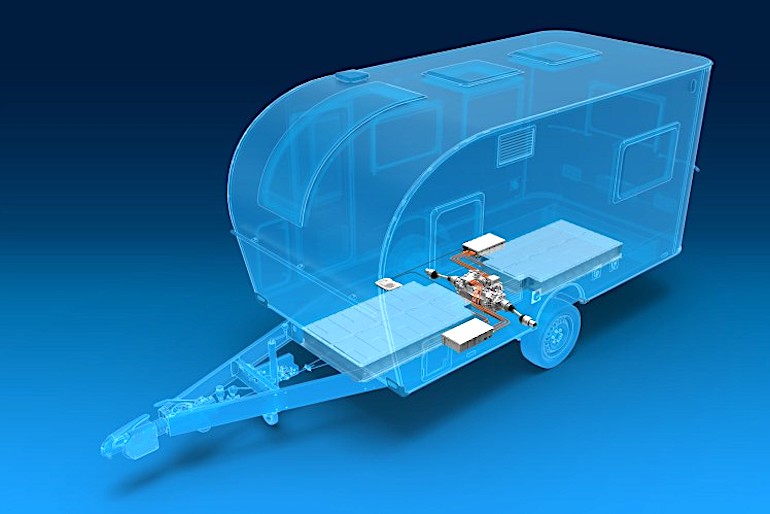 The heavy battery pack in the trailer’s floor provides a low center of gravity, which combines with the electric drive system’s stability control to eliminate the need for a weight-distributing hitch. That eliminates another obstacle for potential buyers who aren’t familiar with the setup and use of such hitches. Just drop the eStream’s coupler onto the tow vehicle’s hitch ball and go.

The eStream’s underlying hardware has already been proven during testing done by German camper maker Dethleffs, which developed the electric drive trailer platform in partnership with ZF. They demonstrated the results with a drive from Germany, over the Austrian Fern Pass and Brenner Pass to Riva, Italy using an Audi e-tron electric SUV. The vehicles completed the 240-mile drive in a little more than six hours and arrived with some power still in their batteries. The electric trailer in that test consumed 74 kW of power on the drive and it recovered 6 kW on the way back down the Alps.

“It is incredible,” exclaimed Rüdiger Freimann, head of R&D at Dethleffs’ corporate parent Erwin Hymer Group at that time. “We have been working on this for three years and have now proven that our idea works. This is just excellent.” 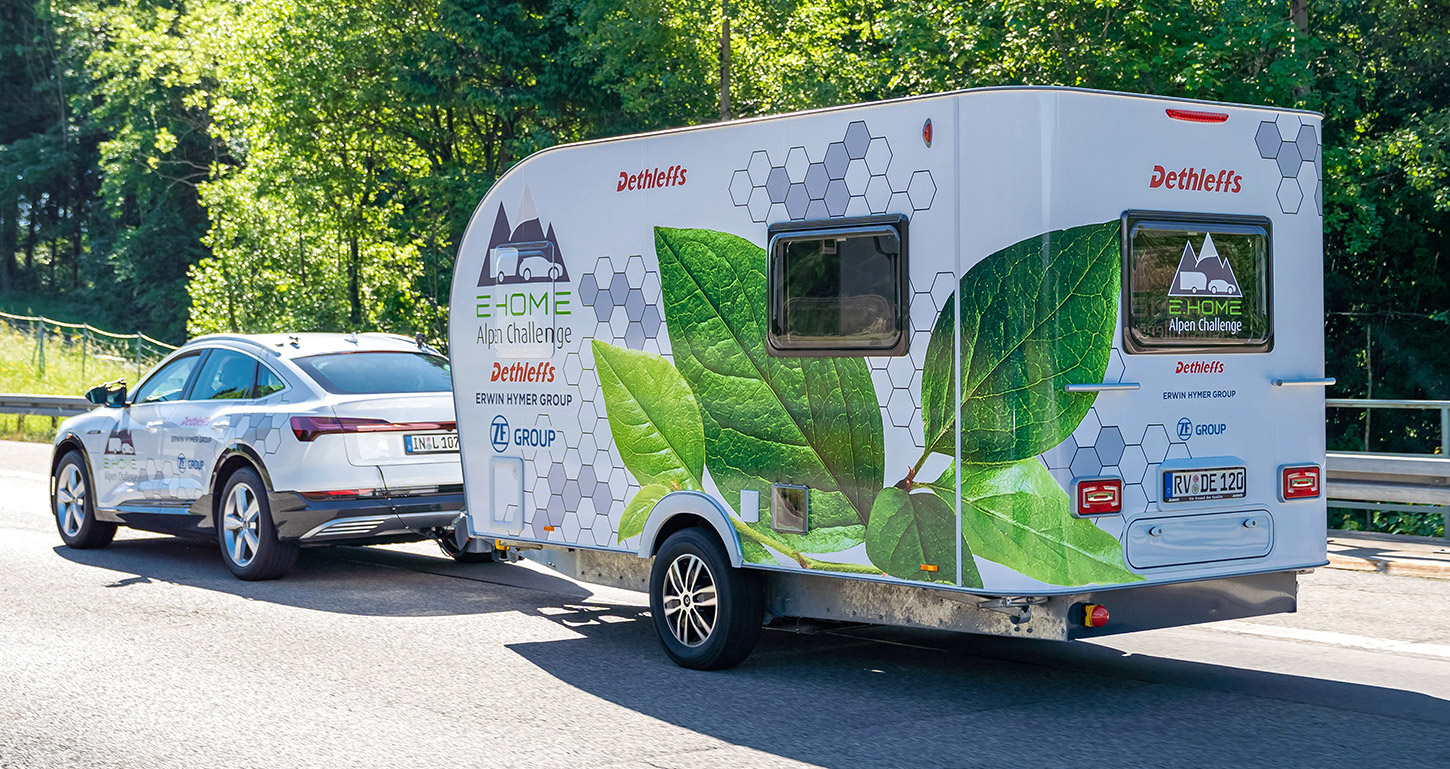 But the travel to the destination is only a means to an end. That end is camping, and the battery pack in the trailer provides the opportunity for customers to enjoy electrically powered amenities at the destination without relying on a connection to shore power.

Even if the trailer has depleted its charge, as in the test case of the Dethleffs prototype, the eStream’s DC fast charger means that 45 minutes at a charging station can bring the pack back to full power.

In this state of charge, it can run the camper’s climate control system, stove, hot water, and cellular router for a weeklong vacation. “We know people will travel farther and stay longer if they have all the comforts of home,” observed Featherstone. “Running air condition, heating, routers; to power all those devices, it is well over a week (of capacity).”

Using the camper in a power-saving mindset, without the climate control, it can go much longer, he added. “If you want to stay off grid, it is almost limitless. You can stay off grid for weeks.” This is aided by the rooftop solar array, which in ideal conditions produces nearly a kilowatt-hour of charge, which is enough to run most systems other than the climate control indefinitely.

“Water is the next thing you’ll run out of, and of course we have some ideas on that as well,” Featherstone noted. 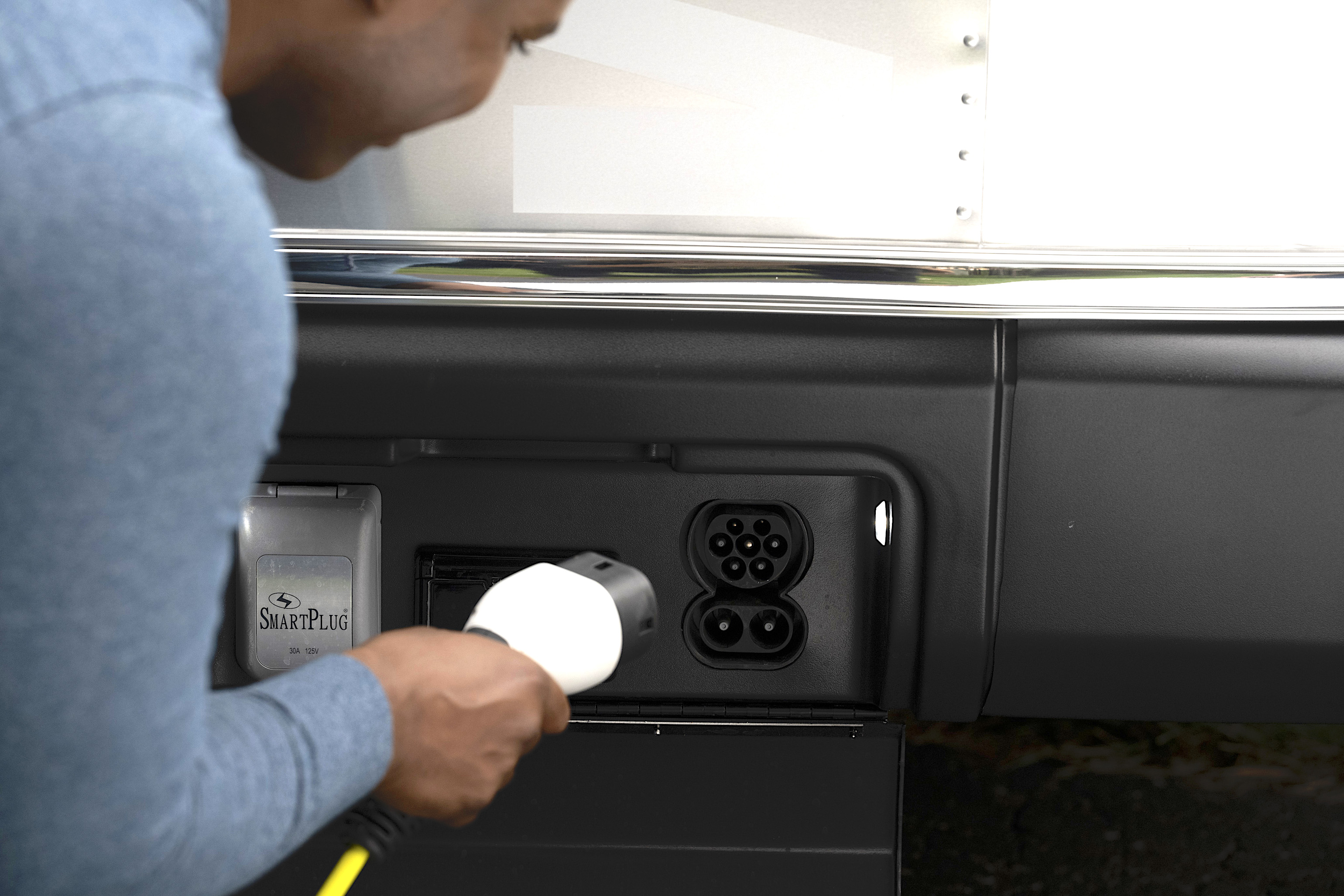 In addition to the SAE J1772 CCS charging port, the eStream also has a SmartPlug 120-volt AC power outlet for powering devices from the trailer's battery.

Customer interest is understandably high, considering how many problems the eStream solves. The practical questions are “When?” and “How much?” The company isn’t ready to say, because this is only a concept, and one that is a fully loaded technology demonstrator that doesn’t necessarily reflect the way customers would choose to outfit their own such camper, said Wheeler.

“It is pretty safe to say that this exact concept, we will not see this on the market ever,” he said. “What really makes sense in the marketplace? That is what drives our timeline.”

The ZF platform is designed to accept a range of battery sizes from 20 kWh to the eStream’s 80 kWh pack, and the customer’s choice of battery will make a substantial difference in the camper’s purchase price. So we’re let to wait to see what configurations are available on the products that do eventually appear in Airstream’s catalog.