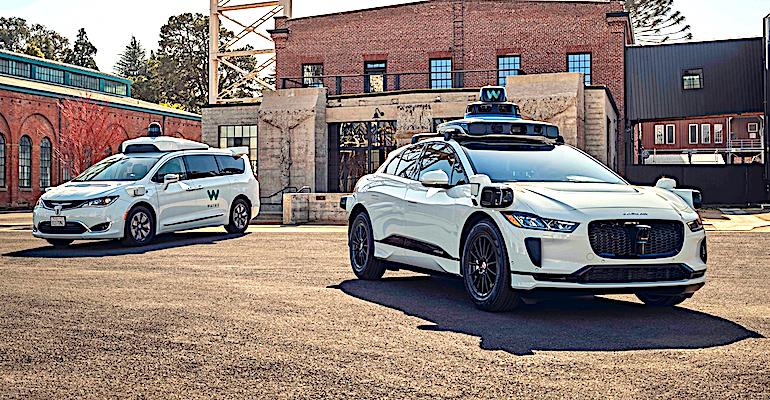 Waymo is testing an electric autonomous vehicle based on the Jaguar I-Pace crossover SUV.
The powerful computer and sensors necessary for autonomy draw a surprising amount of energy.

The microprocessors, cameras, lidars, and radars needed to let cars drive themselves consume so much electric power that they can trim the driving range by one-fourth.

“The compute [power] just to run the algorithms to make all the decisions to drive the car could take 25 percent of the electric range off an electric car,” stated Ford Motor Co. CEO Jim Farley during an interview posted on Hagerty’s YouTube channel. “That’s how power-hungry the human-equivalent of our brain decision-making is,” he said. “Humans are amazing! To try to beat a human, which is basically the intent, it’s a really hard problem.”

Maybe it should come as no surprise that as we ask cars to behave more like humans, they have human-like requirements. The human brain consumes approximately 20 percent of the body’s daily energy consumption, so it makes sense that an electronic brain powerful enough to do the same job would burn a similar amount of energy.

Human sensors like eyes and ears are passive, so they add relatively little to the power draw, but autonomous vehicles use actively energetic sensors in the form of radar and lidar, which contributes to the total system consumption topping that of a human pilot.

“Total system power consumption for most AVs typically runs somewhere between 1.5-3 kW,” noted Sam Abuelsamid, Principal Analyst for e-mobility ecosystems, Guidehouse Insights. “That includes the power for all the sensors and the compute. Compute alone is probably about 500-1,000W depending on the specific configuration.”

“From our perspective, this is certainly not a sustainable model for consumers nor our environment as CO2 emissions continue to skyrocket — and begs the question of whether autonomous vehicles will truly be able to deliver on the promise of greener transportation,” observed Robert Bielby, Senior Director of Automotive System Architecture and Segment Marketing, Embedded Business Unit, at Micron. “To put those earlier power figures into perspective, the industry would ideally like to target 75-200 watts maximum for the compute power for autonomous vehicles, so I believe the industry has a long way to go.”

In recognition of this challenge to EV range, the industry is developing guidelines to help gauge autonomous vehicle processor energy consumption. "AVCC members feel that improving the power efficiency of compute systems is important and we have recently launched a Micro-benchmarks Working Group to investigate this and other topics,” said Tim Wong, chairman of the Autonomous Vehicle Computing Consortium. “Benchmarks offer valuable industry insight about workloads that are likely to be executed. This information will help automotive compute designers to improve the performance and power efficiency of their products.”

The difficulty of saving energy is apparent when considering the size of the processing task. “Autonomous vehicles need to make important decisions in real-time, and all of that requires processing a massive amount of data from the fusion of multiple sensors including radar, lidar, and high-resolution cameras,” explained Bielby.  “As a testament to the sheer quantity of data that autonomous vehicles process, they are expected to generate an average of 20 terabytes of data per day. Combine that with the AI (like gesture recognition, natural language processing, computer vision, and machine learning) needed to piece together and analyze that data in split seconds—on top of in-vehicle infotainment, HD displays, and other digital cockpit features—and we’re seeing an exponential increase in memory and compute demands.”

Just look at the complexity of their software to accomplish these tasks. “The modern luxury vehicle now runs over 100 million lines of code, more than Facebook, Windows Vista, Google Chrome, Boeing 787, the Space Shuttle, and the Hubble Space Telescope,” Bielby reported. “This could grow to 200-300 million lines of code in the near future. To achieve Level 4 to Level 5 autonomous capabilities, compute performance at the level of 600 tera operations per second is required, rivaling what you can find in data centers and servers.”

Micron is working to reel in the power consumption by the autonomy systems with the goal of preserving EV power. “To get back some of that driving range, automotive OEMs and suppliers can look to use low-power, energy-efficient memory and storage created using the most advanced process technology nodes (aka more advanced semiconductor process nodes based on state-of-the-art manufacturing techniques),” Bielby said.

There is also room for improvement when it comes to optimizing these systems for use in autonomous vehicles. “The energy problem is also reflective of the fact that today’s circuits and solutions are not yet fully optimized for the autonomous space,” Bielby stated. “For example, AI computation requires a lot of back and forth between external memory and the computer chip. Every time the car reads or writes to external memory, the power is more than 100X what it would be if the processing could be done locally within the chip.”

Cars can also wring improvements from their electric architecture, according to Bielby. “Another way automotive players are looking to improve energy efficiency and extend driving range is a fundamental rethink and redesign of the underlying electrical system architecture,” he said.

“As the number of electronic control units and sensors has continued to increase dramatically with each generation of vehicle, the associated wiring has grown considerably to the point where it can represent almost 5 percent of the vehicles’ weight, Bielby continued. “And it’s no wonder — today’s high-end vehicle can contain more than 100 ECUs and 500 LEDs with an ever-growing number of sensors.  Interconnecting this large number of ECUs and sensors can require up to 5000 meters of wiring.”

Considering the increasing demands for processing power, it will be interesting to see how successful carmakers are at reducing power consumption for autonomous driving computer systems and sensors, but knowing that industry groups are already targeting this concern suggests the potential for progress by the time cars really are able to chauffeur us to our destinations.