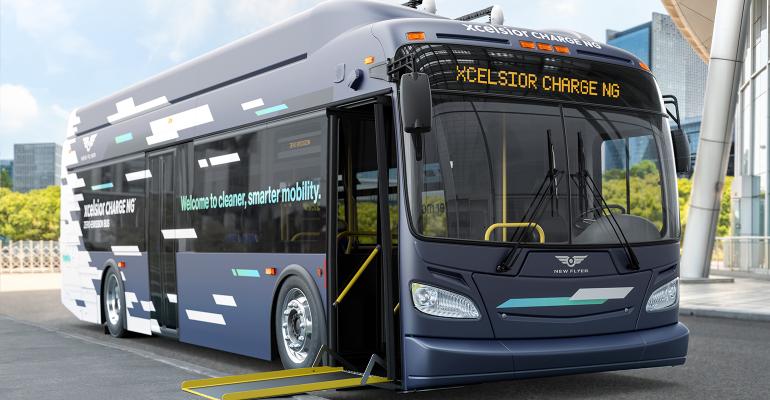 NFI Group provides zero-emission and fuel cell-electric buses to North America, Europe, Asia and Pacific nations and is looking to expand further. In 2021, the company launched six new battery and fuel cell-electric vehicles, including North America’s first Level 4 Automated Transit Bus. NFI resulted from the 2015 merger of New Flyer and Motor Coach Industries (MCI); the company also owns Alexander Dennis and Plaxton in the UK, as well as ARBOC and NFI Parts in North America. NFI streamlined many of its operations with its NFI Forward initiative in 2020.

For instance, the company’s New Flyer Xcelsior CHARGE NG is lighter, simpler, and recovers energy better, the company said, and is “smart-city capable,” meaning it’s able to interact with technology such as traffic-management systems, in which buses can optimize traffic signals to increase travel efficiency.

Meanwhile, MCI vehicles feature a range of batteries, including:

All three NMC batteries have high-power plug-in charging and can go from empty to full in less than four hours, the company said.

Designing buses and batteries to endure grueling mass-transit duty no matter the environment requires NFI to work closely with suppliers to engineering power supplies that perform. To date, NFI has delivered over 2,300 battery-electric and fuel-cell vehicles that have completed over 70 million miles of electric service.

“Our teams work diligently with suppliers to complete assessments of the energy storage system, thermal management, and battery management systems to determine their range and performance capabilities under various scenarios. Working with our partners, we complete prototypes and install those onto demonstration vehicles that complete test routes under various scenarios. This includes operating the vehicle during hot and cold weather, different topographies, traffic, and speed tests. Vehicles also pass through the thorough testing program at the Altoona Bus Research and Testing Facilities.”

With EVs gaining ground among more and more users, rider safety is paramount—with precautions including physical barriers, sensors, and telematics.

“Our buses are engineered, manufactured, innovated, and rigorously tested to be among the safest vehicles in North America, and the most reliable form of public transit in communities,” the NFI representative continued. “We work closely with our suppliers to complete a variety of tests on NFI’s vehicles during the new product development stage, and all of our electric vehicle designs go through rigorous testing prior to being put into service.”

To be sure, EV demand is growing annually—and NFI says it’s poised to meet that need.

“The evolution to zero emission is not a question of if, but, instead, when and how quickly,” the representative concluded. “Through conversations with our customers and analysis of their short- and long-term procurement plans, we anticipate that 40% of NFI Group’s annual bus and coach deliveries in 2025 will be zero-emission buses (i.e., battery electric, fuel cell-electric and trolley electric), with demand continuing to increase on a year-over-year basis.”