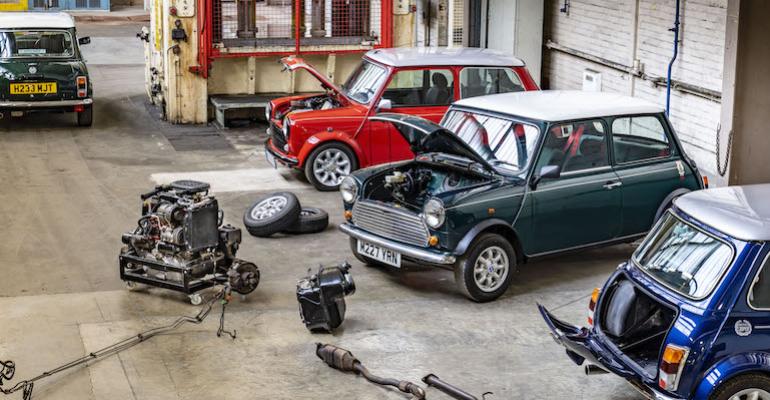 An electric motor for the original Mini combines the car's unique attributes and heritage with cutting-edge technology.

BMW’s MINI Recharged project is an opportunity to write a new chapter in the story of the classic Mini. Originating from a dedicated team at MINI Plant Oxford, the conversion of classic Minis to an electric drive respects the heritage and traditional values of the Min with future-oriented technology. The iconic small car was designed by Alec Issigonis and launched in 1959. It was created during an oil crisis and was based on the idea of saving fuel and transporting four occupants and their luggage in the smallest possible footprint. During the sixties, for rock stars and racing drivers, the Mini became the car in which to be seen.

The idea that BMW could electrify elderly Minis was born even before the manufacturer had a fully battery-electric car on offer with the MINI Cooper SE. As a one-off, a classic Mini Electric was built in 2018 and presented at the New York Auto Show. The reactions were so positive that a dedicated team from MINI Plant Oxford set to work and developed the plan to make a conversion available to customers who own a classic Mini.

"What the project team is developing preserves the character of the classic Mini and enables its fans to enjoy all-electric performance. With MINI Recharged, we are connecting the past with the future of the brand," said Bernd Körber, Head of the MINI Brand in a BMW Group news release.

Included is a modern electric motor that generates a continuous output of up to 90 kilowatts (kW) and accelerates the electrified classic Mini from zero to 100 km/h in approximately nine seconds. The energy is supplied by a high-voltage battery, which can be charged with an output of up to 6.6 kilowatt-hours (kWh) and enables a predicted range of around 100 miles (160 kilometers). In addition, every electrified classic Mini from MINI Recharged receives the characteristic central instrument cluster which displays the drive temperature, the selected gear, range, and speed.

The MINI Recharged with its silent drivetrain with near-instant acceleration also can enter the electric or low-emission driving zones of many large cities, areas that are increasingly becoming otherwise inaccessible with a combustion engine.

The electrification of the classic Mini is being carried out exclusively in the United Kingdom. Each vehicle is given a unique number. "Individuality also plays an important role with MINI Recharged," said Sebastian Beuchel, Head of MINI Global Brand Management. "Unique classic Mini models have always been created, including true works of art on wheels. That's why future collaborations are also planned as part of the MINI Recharged program, allowing well-known artists to express their creativity with specially designed classic Mini models."