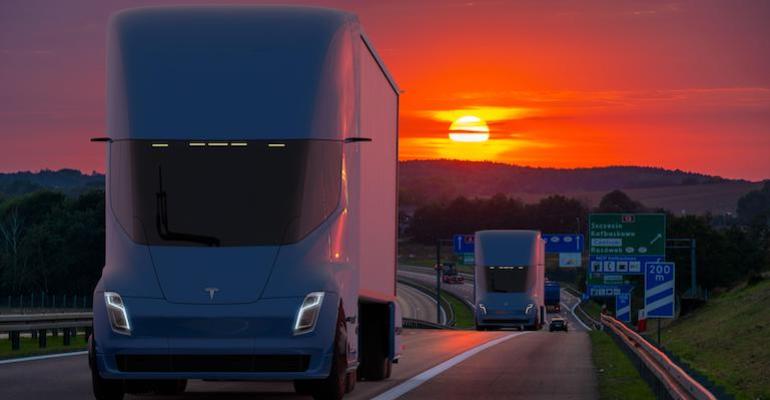 A recent report explores the potential of decarbonizing the trucking industry with battery power.

Electrification is one of the most important trends in transportation today. While electric passenger cars have made considerable strides in a relatively short time, electric trucks remain a rarity. A recent report from Berylls Strategy Advisors offers some insight into these technologies and how they could decarbonize the trucking sector.

The average truck’s carbon footprint is 50 times higher than a passenger vehicle. As environmental concerns rise, supply chains must decarbonize, and that means addressing vehicle emissions.

The State of Electric Trucks Today

There are roughly 5.6 million trucks in the U.S. today, delivering 70% of the nation’s freight. Almost all of them run on fossil fuels, resulting in massive vehicle emissions for the transportation sector. Despite the current lack of electric trucks in service, the Berylls report highlights several promising signs.

In 2019, there were only 20 zero-emissions truck models available in U.S. markets. Today, there are at least 145. Government incentives and increasing awareness of environmental issues have led to massive growth and diversification in this market. As this trend continues, fleet electrification will rise, as there will be more options to meet companies’ specific needs.

While this diversification does make an impact, vehicle range and annual mileage remain the biggest drivers of electric truck adoption. These factors have improved, but they remain a struggle compared to these vehicles’ price points.

Class 3 to class 6 trucks currently hold the most potential for electrification. As the Berylls report highlights, 98% of these trucks don’t travel more than 150 miles per day. Considering all-electric truck manufacturers have announced ranges between 150 and 200 miles, this segment could theoretically eliminate emissions within the next few years.

Recent logistics trends also suggest a move towards a heavier reliance on light-duty and medium-duty vehicles. Trips of 100 miles or fewer now account for 26% of all hauls and routes under 500 miles account for more than half.

If the trucking industry transitions to electric light-duty and medium-duty trucks, it could eliminate a substantial portion of its emissions. Most logistics routes would be emissions-free in that scenario.

While the light-duty and medium-duty truck segments hold promise for electrification, heavy-duty trucks remain a challenge. They must be able to carry a heavier payload over those longer distances, and today’s battery technology struggles to balance those needs.

According to the Barylls study, 100 extra miles of range costs 2,500 pounds of payload. Companies would have to choose between shipping things far or delivering in more trips. Battery costs are also an issue. Adding another 100 miles costs $20,000 more, making long-haul electric trucks inaccessible for smaller companies.

Despite these challenges, some automakers have announced electric trucks with ranges of 500 miles or more. However, those that have released cost estimates confirm these vehicles will cost considerably more than traditional class 8 trucks.

Overall, battery-electric trucks show substantial promise for decarbonizing last-mile and local deliveries. Fleets could use electric alternatives for class 3 through class 6 trucks and remain competitive in the industry. Long-range and heavier-duty trucks can’t justify the transition right now, but that may not be true in the future.

New battery technologies could make class 7 and 8 electric trucks more affordable and accommodate heavier payloads. Solid-state batteries would slash the cost of EV batteries while charging faster and providing more power than internal combustion engines. This technology is likely several years off from being mainstream, but it’s a promising goal.

Hydrogen Trucks Could Provide an Alternative

While the Berylls report focuses on battery-electric vehicles, hydrogen fuel cells could provide a helpful alternative. Hydrogen trucks could boast a similar payload to traditional semis and travel farther, thanks to hydrogen’s high energy density.

Battery-electric alternatives seem to be the focus for most automakers, but hydrogen could serve a more niche purpose. Hydrogen could power class 7 and 8 trucks while battery-electric vehicles decarbonize light-duty and medium-duty ones. This combination could help balance costs and efficiency as supply chains reduce their carbon footprints.

Electric Trucks Are the Future of Transportation

The Berylls study highlights the bright future of electric trucks. While this technology must still overcome some substantial obstacles, it’s a competitive option for trucking companies looking to decarbonize.

Short-haul decarbonization could happen within the next few years. This emissions reduction would then help minimize carbon footprints as companies pursue the longer-term goal of long-haul electrification. While uncertainty abounds, there are promising signs on the horizon.