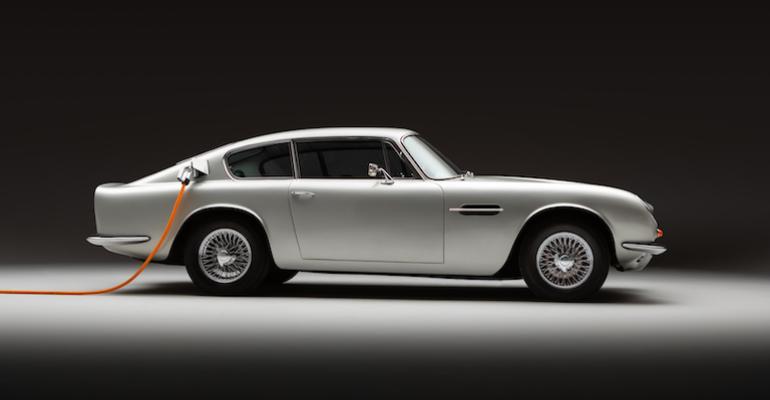 A British company is building electric versions of some of England’s most iconic automobiles—including the just announced Aston Martin DB6.

As the world of electric vehicles (EVs) continues to expand and grow, an interesting niche has formed. The origins of modern electrification began with hobbyists who would rip the internal combustion engine (ICE) from some a used donor car and replace it with an electric motor, controller, and batteries—in the early days (the 1970s-1990s) it was really the only way to be able to drive an EV. Times have changed and there are now dozens of modern EVs with many more coming. Still, there is an interest in converting older, oftentimes classic cars into EVs and a company in England has turned this into an art form.

In 2018 Lunaz Design announced a plan to further the legacies of the most beautiful cars in history through restoration, re-engineering, and electrification. Since then, increasing legislative pressure and a change in global sensibilities have made the company’s mission to preserve these most significant objects more essential than ever before.

The company was founded by David Lorenz and named after his daughter Luna. His goal was to introduce electrified versions of the most celebrated cars in British history. Previously Lunaz has produced the world’s first and only electric Rolls-Royce, Bentley, Range Rover, and Jaguar sportscar models. These iconic models will now be joined by a limited production run of restored, re-engineered, and electrified Aston Martin DB6 cars. Highly limited build-slots will also be made available for Aston Martin DB4 and DB5 cars.

In a Lunaz news release, Lorenz said, “The rapid growth of Lunaz reflects the growing role that remanufacturing and electrification plays in plotting a sustainable course to a clean-air powertrain future. By furthering the legacies of these beautiful Aston Martins we create many more highly skilled jobs and expand our clean-technology production presence at our home in Silverstone, England. We are proud to take vehicles of all types that already exist and extend their use for many generations to come.”

Related: 15 Examples of How EV Variety is Defining a New and Wonderful World of Wheels

To allow the same electric powertrain to be used in multiple classic cars, the company has developed a modular approach that allows the system to be adapted to the exact requirements and characteristics of different applications. Lunaz obtains its cells, inverters, and motors from European Tier 1 Suppliers as opposed to adapting existing battery cells from crashed or disposed of passenger cars—the approach used by most other classic car electrification companies.

The software programming of the Lunaz Aston Martin DB6 marries brisk initial acceleration with the requirements of a Grand Tourer— the intended use for the car is said to be long continental journeys with mixed road conditions. The battery capacity ranges from 80-120 kWh and provides a range of 255 miles between charges. Every car by Lunaz is equipped with CCS fast-charging capability.

Each electrified Aston Martin DB6 by Lunaz will undergo a complete bare-metal restoration before the re-engineering process. This means clients are presented with a concourse-level vehicle that addresses the key requirements of usability, reliability, and sustainability. Up-rating of brakes, suspension, and steering are also undertaken as well as bringing interior comfort and convenience up to modern standards through modern air conditioning and heating systems and the sensitive integration of the latest infotainment, navigation systems with full Wi-Fi connectivity.

Jen Holloway, Lunaz Design Director said, “The Aston Martin DB6 delivered on the promise of truly indulgent continental touring. Its lines marry dynamic purpose with generous proportions. This is a legacy we could not resist furthering by creating the most alluring electric car in the world. We are proud to introduce the quintessential British GT, remastered for a new generation.”

Lunaz will be able to offer the Aston Martin DB6 cars in both left-hand drive and right-hand drive configurations. The company notes that exact prices will be communicated privately on application but will exceed $1million + local taxes. First deliveries are scheduled for the third quarter of 2023. Prices for rare DB4 and DB5 model cars will be available strictly on application.