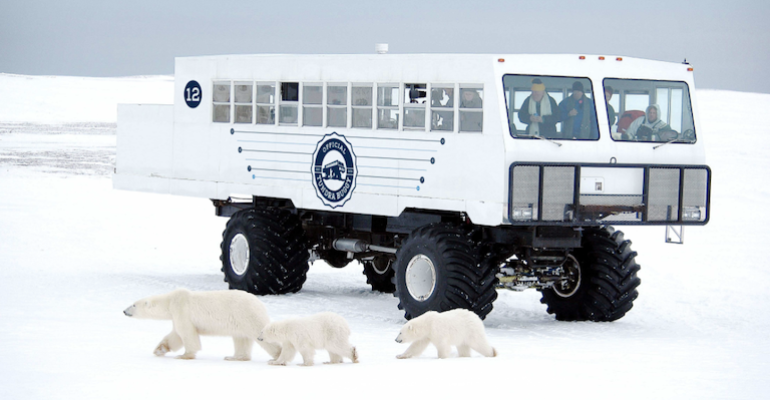 Tundra Buggy 12 before being converted to electric drive
A new EV Tundra Buggy tours the Subarctic with lower noise and reduced GHG emissions.

Polar bears are often used as an example of species that are under severe threat from climate change. Actually getting to see wild polar bears as they roam subarctic tundra is possible thanks to a company in Churchill, Manitoba, Canada called Frontiers North Adventures. The irony is that to observe the bears it is necessary to ride in a giant diesel-powered Tundra Buggy that emits tons of carbon dioxide (CO2) over the course of a season.

All that is changing—Frontiers North Adventures has converted one of its giant 40-passenger diesel-powered Tundra Buggys into a battery-powered vehicle. Working with Red River College (RRC), and a collaboration made possible through Manitoba's new Conservation and Climate Fund, the Vehicle Technology Centre (VTCI), and in-kind support and technical services from RRC Polytech's Vehicle Technology & Energy Centre (VTEC), the new EV Tundra Buggy emits zero emissions and minimal sound, providing a less-intrusive experience for both guests and wildlife.

Related: Finding Talent is Key for the Future of Energy-Intensive Industries

"In addition to contributing to Frontiers North Adventures' reduction of greenhouse gas emissions, the main deliverable of this EV Tundra Buggy will be a silent touring experience for our guests," said John Gunter, CEO and president of Frontiers North Adventures in a company news release. "The EV Tundra Buggy makes it easier for machines to fade more into the background of any guest's wildlife experience in Churchill."

The Tundra Buggy was converted EV drive using a repurposed battery that was originally in an electric bus. The distinctive Tundra Buggy body was retained but a new frame with new suspension, axles, and drive motors replaced the old diesel system.

The company says that they are committed to reducing greenhouse gas (GHG) emissions and has plans to convert its entire fleet of 12 Tundra Buggies from diesel to electric power before the end of the decade. This could result in a reduction of its GHG emissions by more than 3,600 tonnes of carbon dioxide over the next 25 years.

To learn more about polar bears and how climate change endangers their survival, check out the conservation organization Polar Bears International.