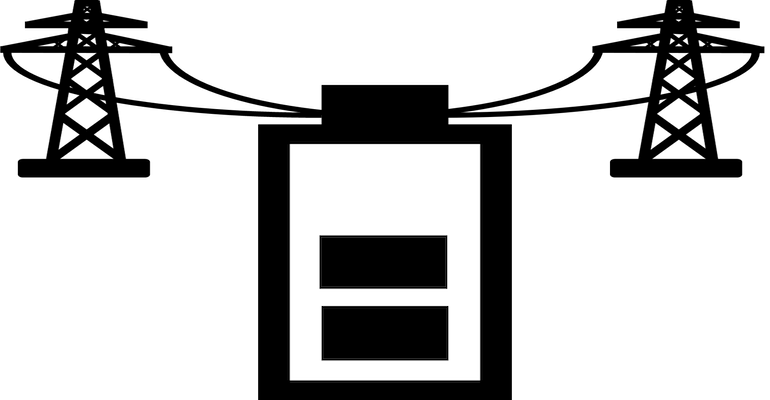 Researchers developed a ‘universal descriptor’ that can help determine electrolytes for optimal use in redox flow batteries.

Researchers have developed what they call a “universal descriptor” to help them determine new electrolytes for optimal design of grid-scale storage batteries.

A team at Washington University in St. Louis developed the technology,  which can determine which materials will be suitable as electrolytes for any organic redox flow battery (ORFB), they said. These type of batteries are currently among the most effective ways to store energy from renewable power sources such as solar for use with the traditional power grid.

Redox flow systems are generally cheaper to design than lithium-ion batteries per unit of electricity stored at scale, as they use inexpensive organic materials for the battery active materials--or the cathode and anode.

Researchers in the lab of Vijay Ramani, a distinguished university professor at the university’s McKelvey School of Engineering, were working with a redux flow storage system that used a widely used herbicide called viologen as an active material. They needed to find an electrolyte that would create an optimal reaction for the system, explained Kritika Sharma, a PhD student in Ramani’s lab.

“If we are using such organic actives, then the main decision is, ‘What electrolyte do we dissolve it in to maximize battery efficacy?’” she said in a press statement.

Typically to do this would require a lot of testing of various materials, which also means a significant time investment as well as use of resources during the trial-and-error process. 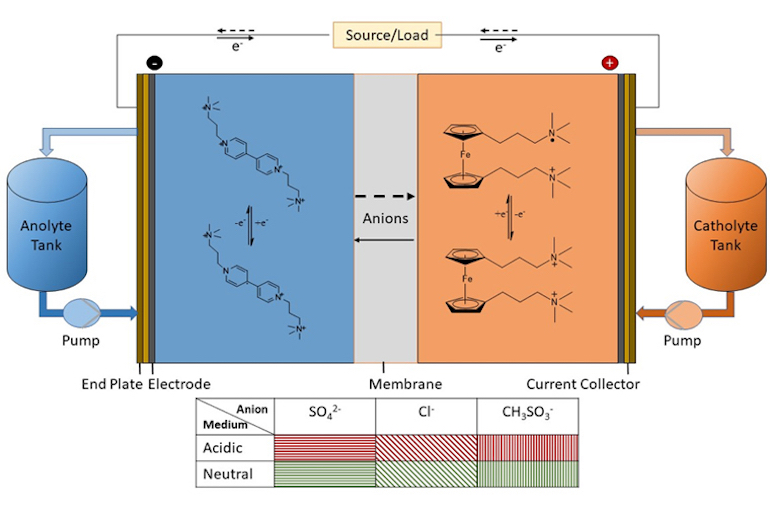 Schematic of an organic redox flow battery assembled with BTMAP-Fc catholyte and BTMAP-Vi anolyte incorporating an anion exchange membrane separator. The pH and anion combinations in the supporting electrolyte are tabulated below the schematic. The electron and ion flow during charging is depicted using a solid line, and the equivalent flow during the discharge process is depicted using dashed lines

However, the team devised a way to make this process much faster and less painstaking by calculating the solvent reorganization energy from the Born equation--with reference to an electrolyte’s composition--to predict the electrolytes’ device-level performance, researchers wrote in an abstract for a paper on the work in the journal Proceedings of the National Academy of Sciences.

“This descriptor was found to correlate with key transport and kinetic properties over a range of electrolyte compositions and pH values, succinctly capturing the multicomponent interactions between the electrolyte salts and solvent,” researchers wrote. “This enables the initial high-throughput screening of electrolyte candidates with minimal experimentation.”

What they found is that their universal descriptor indicated the combinations with the most complementary chemistry and battery performance characteristics--low discharge polarization and high open circuit voltage, researchers said.

This led to the conclusion that low pH electrolytes with methane sulfonate or chloride counterions worked best, said Shrihari Sankarasubramanian, assistant professor of chemical engineering at the University of Texas at San Antonio, who collaborated on the research.

“We were able to predict this with an hour of experimentation in the lab instead of the usual days or weeks,” he said in a press statement.

Use for Future Design

Researchers said there is more research to be done regarding the use of the descriptor, as so far they have reported on results only from a limited number of combinations.

However, the descriptor can be generalized, since it’s based on the fundamental relationship between the actives and electrolytes and correlates the kinetic and transport properties in the system, Sharma said.

This means that the descriptor already can be used to predict the best electrolytes for a given organic active to make the development of new storage technologies more efficient, she said.

“Grid-scale energy storage is required to have a stable grid when intermittent solar- and wind-based generators are dominant,” Sharma said in a press statement. “Our universal descriptor can help speed up the development of new storage solutions.”

This Novel Device Produces Hydrogen Fuel and Generates Electricity In One Unit
Oct 18, 2021