Marching With Better Batteries: Improving Technology for the Armed Services 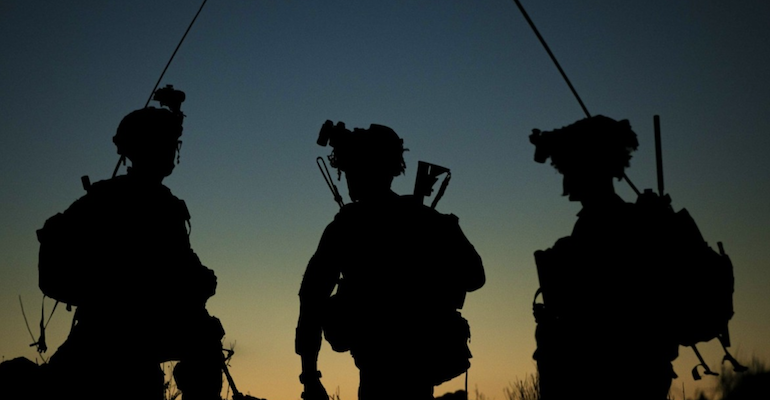 For Veteran’s Day, here is a reminder that finding a way to improve battery performance can improve the odds for soldiers in the field.

It’s an old saying that an army travels on its stomach. The modern soldier goes into battle carrying anywhere from 120 to 200 pounds of gear and equipment. Aside from weapons, ammunition, and body armor, a US Army infantryman carries up to 25 pounds of batteries. The batteries power everything from night vision to radios, as well as newer technologies using smartphones, tablets, and GPS. The electrical power requirement today is approximately 12 watts, and this is expected to double by 2025. Today, an army truly travels on its batteries.

Related: COP26: Why Are Batteries Not Included?

Probably the first battery-powered device that an average foot soldier carried into battle was a flashlight. In 1927, the 90° angle head, brass-bodied Eveready No. 2697 Boy Scout Flashlight had been introduced. This became the basis for the US Army TL-122 flashlight that was adopted just prior to World War II. The “TL-122” designation was stamped into the head instead of the BSA emblem and the body of the flashlight was painted Army olive drab. A GI Joe knew how to keep his Boy Scout flashlight, with its pair of D-cell batteries, working, so it was not a stretch that the Boy Scout flashlight could go to war. The brass housing was later (1943) changed to plastic during the war as brass was a strategic material. The TL-122 was used by the USA, British, Italian, and French military forces.

For the Vietnam era, an improved model of the Eveready flashlight was introduced and entered service in 1961. Called the MX-991/U, veterans might remember that this flashlight carried the impressive designation: "FLASHLIGHT: Electric, Portable, and Hand Lighting Equipment, 2-cell, w/ lamp, and lens filter, w/o batteries, Type I Class A (21108) MX991-U." Today, going far beyond simple D-Cell flashlights and handheld radios, the need for advanced battery power has continued to grow.

“Battery energy and performance is a basic but fundamental need of the Army because it is required in almost every aspect of serving on the front lines,” said Dr. Matt Willis, Director of Army Prize Competitions and the Army Applied SBIR Program in an Army news release. “Batteries power our technology, and technology powers our Soldiers.”

Because of their lighter weight and higher energy density, lithium-based batteries have replaced almost every other type carried by soldiers over the past decade. Lithium-sulfur dioxide primary batteries have a long shelf life and are easy to store and are used in electronic equipment like GPS receivers and radio gear. Rechargeable lithium-ion batteries are used in devices such as tactical radios, thermal imagers, ECM, ESM, and portable computing. Lithium-ion batteries are also used to power robots and will be used as the military transitions to a wider range of electric vehicles.

The latest xTech Innovation Combine, which is sponsored by the Office of the Assistant Secretary of the Army for Acquisition, Logistics, and Technology, and Army Futures Command, chose three finalists for each topic area. They are:

The Innovation Combine finalists were selected from more than 44 submissions in the first phase of the competition, which closed in May 2021. In the second phase, the competitors presented their energy storage solutions to a group of judges and answered questions from a panel of experts during the Advanced Energy Summit at the University of Texas at Austin.

The goal is a simple one—to make better, safer, more powerful batteries that soldiers can carry into the field. Give a soldier a battery with more energy, a longer runtime, at less weight, and that war-fighter will have a real advantage over a less well-equipped adversary.