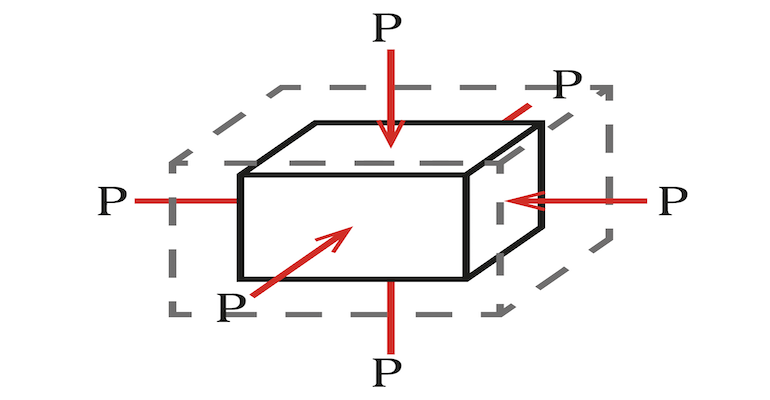 Discovery could provide energy-storage devices for EVs that double their potential range without sacrificing weight.

Researchers have determined the best pressure to apply to a lithium-metal battery during operation for optimal performance, paving the way for future improvements in device design, they said.

A multi-institutional team of materials scientists worked with lithium-metal batteries (LMBs), which use lithium to replace the typically used graphite for battery anodes.

Related: Two Into One: Solid-State Lithium Batteries with a Silicon Anode

LMBs have great potential to double the capacity of today’s best commercially used lithium-ion devices—for example, to enable an electric vehicle (EV) to have twice the range using a battery with the same weight, according to the team.

However, they currently face viability challenges for this use because of their short lifespan and potential safety hazards—particularly short circuits caused by lithium dendrite growth that can cause explosions or fire, researchers said. Scientists from the University of California San Diego, Michigan State University (MSU), Idaho National Laboratory, and the General Motors Research and Development Center participated in the study.

Under Pressure—in a Good Way

Researchers aimed to try to solve these issues by working with stack pressure—or a mechanical pressure that is applied to a battery pack—which seems to improve the lifespan of LMBs, explained Chengcheng Fang, a former Ph.D. student from the lab of UC San Diego Nanoengineering Professor Shirley Meng. Fang is now a professor at MSU.

“Applying stack pressure has been widely used in modern lithium-ion batteries to improve cycling performance by minimizing the interfacial and transport impedance,” he told Battery Technology in an email interview. “For lithium-metal batteries, which is the focus of this work, stack pressure is also recognized as an effective way to improve cycling performance, but the reason behind is ambiguous.”

Scientists set out to shed light on the ambiguity, which they achieved by using several characterization and imaging techniques to study LMB morphology and quantify performance when an LMB was subjected to different pressures, Fang said.

“We designed a customized cell coupled with a pressure sensor that can precisely monitor the stack pressure during battery operation,” he explained. “We then took the electrochemically deposited lithium under different stack pressures for morphological study.”
What researchers found is that higher pressure levels force lithium particles to deposit in neat columns, without any porous spaces in between. The pressure required to achieve this result is 350 kilo Pascal, or roughly 3.5 atmospheres, researchers reported.

They also found that batteries subjected to lower levels of pressure are porous, depositing lithium particles deposit in a disorderly fashion. This phenomenon is what leaves space for dendrites to grow and batteries to fail, researchers said.

Additionally, the team demonstrated that the process doesn’t affect the solid electrolyte interphase (SEI) structure of the batteries’ electrolytes. Moreover, they can boost the performance of LMBs by not completely discharging the battery while it cycles, and instead keeping a reservoir of lithium where re-nucleation can occur, Fang told us.

“We propose a lithium-reservoir-testing protocol to maintain the ideal lithium morphology during extended cycling,” he explained.

The team published a paper on its work in the journal Nature Energy.

While Fang said the team’s discoveries will be widely used in future lithium-metal battery pack design, manufacturing facilities for LMBs will have to be retooled to apply the new technique.

The team plans to continue its work by exploring how to integrate the stack pressure into the practical battery pack without incurring a weight penalty in the overall design, he said.

Halloween? What a Perfect Time to Think About Generating Electricity From Blood!
Oct 29, 2021