Image Courtesy of the Researchers 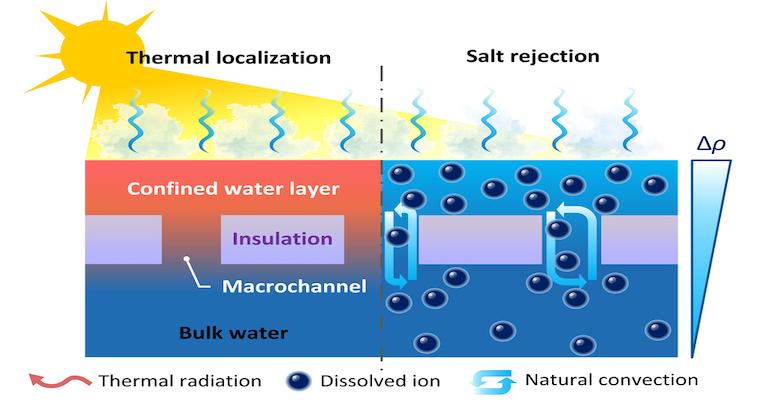 Researchers test two identical outdoor experimental solar-based desalination set-ups placed next to each other to see how they perform.
A wick-free system developed by researchers at MIT and a Chinese university solves a key challenge that previous solutions have encountered upon operation.

Researchers have taken another crack at using solar power for widescale water desalination, a scenario that is known to be potentially useful but has faced challenges in the past.

About two-thirds of people around the world suffer from water shortages, and many developing areas also face a lack of dependable energy. This scenario is poised to worsen in areas besieged by war, such as in Ukraine.

Researchers have been trying to find portable and low-cost ways to desalinate seawater or brackish water using just solar heat, which has proved effective. However, one of the biggest problems encountered with these systems is the fouling of equipment due to salt buildup, which adds complexity and expense to the endeavor, noted MIT professor of mechanical engineering Evelyn Wang, who led the research.

“There have been a lot of demonstrations of really high-performing, salt-rejecting, solar-based evaporation designs of various devices,” she acknowledged in a press statement. “The challenge has been the salt fouling issue, that people haven’t really addressed. So, we see these very attractive performance numbers, but they’re often limited because of longevity. Over time, things will foul.”

Wang and her team set out to solve the problem by eliminating the source of much of the salt fouling of previous desalination systems—a wick that most of these systems have used to draw saline water through the device.

Researchers developed a wick-free, layered system that comprises dark material at the top to absorb the sun’s heat, followed by a thin layer of water above a perforated layer of material. This all sits atop a deep reservoir of salty water such as a tank or a pond.

Getting the size of the holes in the perforated materials was key to the performance of the system, and thus required careful calculations and experiments, researchers said.

Eventually, they determined the optimal size for the holes drilled through the perforated material--which in their tests was made of polyurethane--was 2.5 millimeters in diameter. This allowed them to use commonly available waterjets to make the perforations.

The size also served well the performance of the system, allowing enough space for a natural convective circulation between the warmer upper layer of water and the colder reservoir below, researchers said.  That circulation naturally draws the salt from the thin layer above down into the large body of water below, causing it to become diluted as well as eliminating the problem of salt fouling, Wang said.

“It allows us to achieve high performance and yet also prevent this salt accumulation,” Wang, who also is head of MIT’s Department of Mechanical Engineering, said in a press statement.

The desalination process in the device is driven by natural convection principles, she said. Evaporation occurs in the confined water layer near the top of the system, where salt makes the density of the water higher while the water at the bottom is less dense.

“So, this is an original driving force for this natural convection because the higher density at the top drives the salty liquid to go down,” Wang explained in a press statement. The water evaporated from the top of the system can then be collected on a condensing surface, providing pure freshwater as a result, she said.

One challenge researchers had to be careful to avoid was the loss of heat due to the rejection of salt to the water below. To remedy this potential scenario, researchers fabricated the perforated layer out of a material that is significantly insulated to keep the heat concentrated above, they said. Meanwhile, a simple layer of black paint was used to create solar heating at the top.

Researchers published a paper in the journal Nature Communications. So far they have proven their concept using benchtop devices, but they aim to scale the system up for more practical applications, something that could take a few years, they said.

Uses for the Underdeveloped World

The team envisions early uses of the system will be to provide safe water in remote off-grid locations, or for disaster relief after hurricanes, earthquakes, or other disruptions of normal water supplies.

However, calculations suggest that a system with just 1 square meter (about a square yard) of the area to collect water could provide a family’s daily drinking-water needs, with a materials cost of about only $4. This makes the system extremely viable to one day provide drinking water in underdeveloped regions that need it, Wang said, which is where the “real opportunity” for the device is.

“I think that is where there's most probable impact near-term, because of the simplicity of the design,” she said in a press statement. However, “if we really want to get it out there, we also need to work with the end-users, to really be able to adopt the way we design it so that they’re willing to use it.”

Other benefits of the system include reliability under extreme conditions, including the ability to desalinate near-saturation saline water, researchers said. This also suggests that the system might be suitable for wastewater treatment as well, they said.