Solar Power Invests in the Value of the Grid 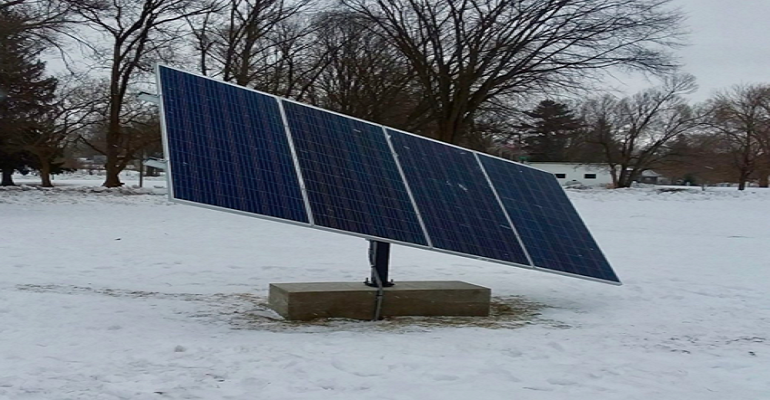 Studies by Michigan Tech have shown that home-installed solar panels benefit the entire power grid, even in places that experience extreme winter conditions.
Even in a place with the harshest winter, new research shows home-owned solar power provides benefits to all utility customers.

It’s getting harder and harder to argue against solar energy. Photovoltaic (PV) solar cells are becoming increasingly popular at a utility-scale with large solar arrays, at a community level with “solar gardens” that serve groups of homeowners, and on an individual household scale. Solar energy provided about 2% of the electrical energy in the US in 2019. The US Federal Energy Regulatory Commission (FERC) predicts that slightly more than 50% of new US power capacity during the next 3 years will come from solar power. The FERC estimate only considered large-scale solar power projects, and not small-scale/rooftop home solar power systems.

At grid-scale, solar power has a number of advantages:

Even if grid-scale solar power is compelling, for years utility companies have claimed that home solar panel installations drive up electricity costs for homeowners without the panels. Now, a study by a team at Michigan Technological University (MTU) has shown that the opposite is true. PV owners who are tied into the power grid are subsidizing their neighbor’s power bills.

“Anyone who puts up solar is being a great citizen for their neighbors and for their local utility,” said Joshua Pearce, Richard Witte Endowed Professor of Materials Science and Engineering and professor of electrical and computer engineering at Michigan Technological University in an MTU press release.

He noted that when someone puts up grid-tied solar panels, they are essentially investing in the grid itself. “Customers with solar distributed generation are making it so utility companies don’t have to make as many infrastructure investments, while at the same time solar shaves down peak demands when electricity is the most expensive.”

The MTU study noted that most PV systems are grid-tied and convert sunlight directly into electricity that is either used on-site or fed back into the grid. At night or on cloudy days, PV-owning customers use grid-sourced electricity, so no batteries are needed.

Pearce and Koami Soulemane Hayibo, a graduate student in the Michigan Tech Open Sustainability Technology (MOST) Lab, found that “…grid-tied PV-owning utility customers are under-compensated in most of the U.S., as the ‘value of solar’ eclipses both the net metering and two-tiered rates that utilities pay for solar electricity.”

“It can be concluded that substantial future regulatory reform is needed to ensure that grid-tied solar PV owners are not unjustly subsidizing U.S. electric utilities,” Pearce explained. “This study provides greater clarity to decision-makers so they see solar PV is truly an economic benefit in the best interest of all utility customers.”

On a grid-scale, energy storage using batteries makes sense. The excess energy generated by a solar array during the day can be used to add power to the grid at night. What’s more, energy can be saved in the morning and early afternoon, and then returned during peak load periods in the mid- or late-afternoon. Batteries used for this peaking application can come online quickly.

For a home PV system, the advantages of an on-site energy storage system aren’t as clear. Although the price of lithium-ion battery energy storage has dropped significantly over the past decade and will continue to do so, it is still difficult to recoup the investment in battery storage over any reasonable time frame. The advantages of battery storage are that energy can be stored from the solar array when the price paid for energy by the utility is low, and then sold to the utility when demand and prices paid by the utility are higher. But few utilities pay for energy from homeowners at different prices during the day.

Another potential advantage to battery storage is that the battery can provide a source of electricity in the event of a grid power failure. The problem here is that most energy storage systems still require a synchronizing signal from the power grid, and if the grid goes down, the battery storage system can’t be used without the grid providing the necessary signals. Equipment can be installed by the homeowner to allow the battery to act as an independent backup, but there are costs involved with such an upgrade.

Another aspect of the MTU study detailed their work to leverage the use of a PV solar system with the electrification of home heating systems using heat pumps. Consider that Michigan Tech is located in Michigan’s Upper Peninsula (UP), a place with some of the coldest and most severe winters in the lower 48 states.

To determine the potential for combined solar and heat pump systems in the UP, Pearce performed numerical simulations and economic analysis using the same loads and climate, but with local electricity and natural gas rates for the town of Sault Ste. Marie, which lies in both Canada and the US. MTU found that North American residents can profitably install residential solar and heat pump systems providing for all of their electric and heating needs and earning up to 1.9% return in the US and 2.7% in Canada.

“Our results suggest northern homeowners have a clear and simple method to reduce their greenhouse gas emissions by making an investment that offers a higher internal rate of return than savings accounts, CDs, and global investment certificates in both the U.S. and Canada,” Pearce said. “Residential PV and solar-powered heat pumps can be considered 25-year investments in financial security and environmental sustainability.”