HomeApplicationsSolvay Shifts Gears on Electric Highway
Recent
Applications
Here's Where Battery Manufacturing Will Grow the Most
May 24, 2022
Inexpensive, High-Voltage, Metal-Free Lithium-Ion Battery Inches Closer to Reality
May 24, 2022
Los Angeles Fire Department Deploys Nation’s First Electric Fire Truck
May 24, 2022
Sila Acquires Location for Battery Materials Plant
May 24, 2022
Scavenger Nanoparticles Pave Way for EV Fuel Cells
May 23, 2022
How the US Can Catch China in the Battery Race
May 17, 2022
We Must Keep EVs from Overpowering the Grid
May 17, 2022
Ford's Electric F-150 Lightning is a Real Pickup Truck
May 17, 2022 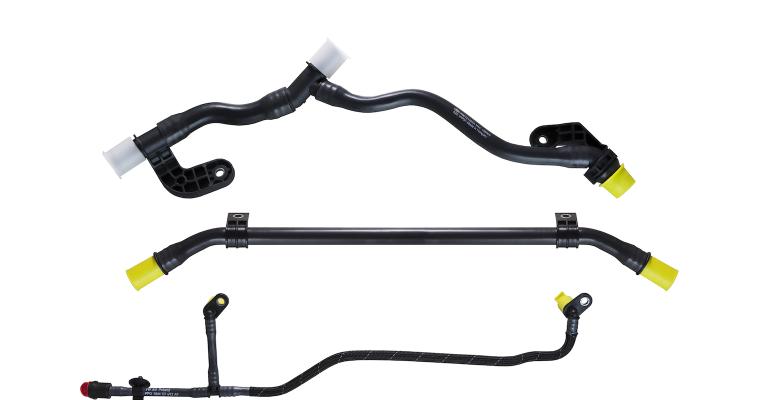 Coolant lines for automotive applications made with Solvay's Ryton PPS.
Combustion is out, coulombs are in for the future of transportation.

Emission reductions, either voluntary on the part of automakers or prompted via regional and national mandates and legislation, are driving the car industry in the direction of electric, with hybrid solutions to boot. The ensuing revolution in drivetrain technology has placed suppliers at the forefront in developing solutions to ensure vehicle safety and performance on the road, particularly pertaining to the lithium-ion batteries at the core of it all.

Speaking to PlasticsToday at the Fakuma show in Friedrichshafen, Germany, Nicolas Batailley, E-Mobility Marketing Manager, Solvay Specialty Polymers (L’Isle d’Abeau, France) highlighted a battery cage that the company had developed to protect the battery if an accident occurred. The compact, 48-V battery is housed in reinforced Amodel PPA “developed only for safety reasons,” emphasizes Batailley.

Thermal management is another area of battery technology where engineering plastics play a key role and, in most cases, “customers ask for coolant lines,” notes Batailley. “[Here], we have developed PPS grades for extruding cooling lines which are micro stabilized and mostly flame retardant, depending on the grade.”

Batailley also sees autonomous driving as a key future influencer of material selection. “Not next year, but probably by 2030 it will be there. It will have a huge impact in terms of material selection,” he says. “Engineering plastics will be deployed extensively in sensors, LiDAR, and radars. If these don’t work [as intended], well, the car is no longer autonomous,” he notes. Solvay is working on different solutions that are best for the sensors and LiDAR. Simply keeping the lens clean is an issue, for example. “You also have transparency issues — the radar signal needs to go through the plastic, so the car isn’t driving blind.” He adds, “You can put the LiDAR on top of the car, but that doesn’t look attractive, so you may want to hide it somewhere, but that generates its own set of problems if the waves can’t penetrate.”

Solvay has undoubtedly been successful in developing several solutions for e-mobility, as evidenced by its recent receipt of several awards from the Society of Plastics Engineers (SPE). First place in the New Mobility category of the awards went to a rotor slot liner molded with Xydar LCP, followed by a second place finish in the Enabler category for a magnet wire insulation in KetaSpire PEEK, and a third place in the Powertrain category for a coolant line using Ryton PPS.

The slot liner is an injection-molded 30% glass-ﬁber-reinforced and ﬂame-retardant liquid crystal polymer (LCP) by Italy’s Cobraplast for one of Germany’s foremost automotive manufacturers. The part is used in the rotor design of an advanced-generation electric drive traction motor, where it provides a barrier between the copper windings and steel lamination of the rotor.

Norbert Sparrow contributed to this article.