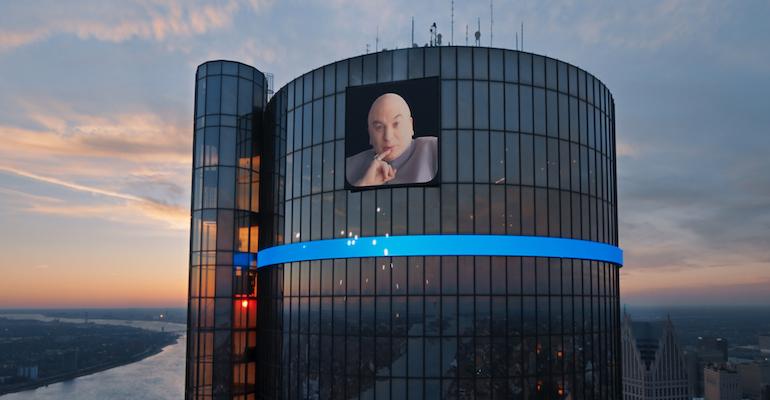 With dozens of new EV models about to hit the market, carmakers go big with Super Bowl ads.

Car companies have a long tradition of buying Super Bowl ad time. With a record viewership estimated to be more than 117 million, carmakers think that if they can produce a hip, jazzy 30-second spot during the broadcast it will influence potential buyers to visit their showrooms.

The average Super Bowl 30-second ad cost this year cost a record $6.5 million ( not counting what it costs to actually hire well-known actors and produce the ad.) So it is significant that General Motors (GM), BMW, Kia, and Polestar all spent the money to advertise their coming electric vehicles.

Well sort of. GM’s commercial featured actor Mike Myers as a return of his Dr. Evil character from the Austin Powers franchise, along with the major cast members from the series, trying to take over the world after first saving the world through the deployment of EVs. GM plans to have at least 30 electric models on the market by 2025, although the ad doesn’t have much to do with the actual cars until the very end. Entertaining, yes, but not exactly product intensive. This is a 90-second version of the ad:

GM also has an ad for its upcoming Chevrolet Silverado EV pickup truck, which features the truck driving through a New Jersey and New York urban landscape. The actors who portrayed Tony Soprano’s kids, Jamie-Lynn Sigler (Meadow) and Robert Iler (A.J.) are featured.

BMW has also hired big names to promote its EVs, with Arnold Schwarzenegger playing the now-retired Greek God Zeus with Salma Hayek playing his wide Hera. Somehow, Zeus has the ability to charge electric devices by pointing his finger at them, which provides him little solace from his doldrums until Hera buys him a new EV in the form of a 2022 BMW iX. We only get to see the BMW EV at the very end of the spot. Here is a 60-second version:

Polestar has a very brief ad for its new Polestar 2 EV, which promises no gimmicks, big stars, or warm and fuzzy puppies. Meanwhile, Kia’s ad which features its EV6 electric model has a robotic puppy that wants to be adopted by an EV6 owner. Here it is:

Numerous studies among potential car buyers have shown that a lack of awareness is one of the biggest issues facing the increased sales of EVs in the US. With dozens of new EVs hitting the market in the next three years in the US, the obvious goal of the carmakers advertising on the Super Bowl isn’t to promote a specific model but rather to open the public’s eyes that EVs are not only coming but are here to stay.