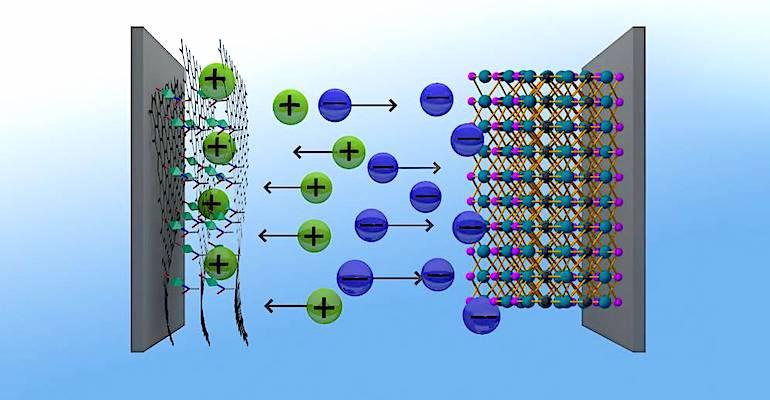 Graphene hybrids (left) made from metal-organic frameworks (MOF) and graphenic acid make an excellent positive electrode for supercapacitors, which thus achieve an energy density similar to that of nickel-metal hydride batteries.
Improving energy storage devices through the use of novel combinations of high-technology materials.

Lithium-ion batteries are proving themselves to be an effective way to store electricity for everything from laptops to electric vehicles (EV). One limitation they have is the ability to very rapidly store large amounts of energy and put it back out again just as quickly. This situation arises in an EV as it must store electrical energy created by regenerative braking when coming to a stop and then return that energy to accelerate the vehicle up to speed. For this application, supercapacitors are under investigation.

A traditional capacitor stores electric energy statically by charge separation in an electric field between two electrode plates. A supercapacitor (also called an ultracapacitor) stores 10 to 100 times the energy per unit volume of a conventional capacitor and can accept and deliver electric charge must faster than a rechargeable battery.

Supercapacitors store electrical energy via two different storage principles: static double-layer capacitance and electrochemical pseudocapacitance. Each contributes to the energy storage, depending upon the structure and materials used for the electrodes and electrolyte.

The electrolyte in a hybrid supercapacitor determines its operating voltage, temperature range, and storage capacity. The electrolyte dissociates into positive cations and negative anions that make the electrolyte electrically conductive between the two electrodes.

A team of researchers at the Technical University of Munich (TUM) might be getting close to just such a supercapacitor. According to TUM news release, they have developed a novel, powerful as well as sustainable graphene hybrid material for supercapacitors that serves as the positive electrode in a supercapacitor. They combine it with a proven negative electrode based on titanium and carbon.

According to the TUM release, “The new energy storage device does not only attain an energy density of up to 73 Wh/kg, which is roughly equivalent to the energy density of a nickel-metal hydride battery, but also performs much better than most other supercapacitors at a power density of 16 kW/kg.” They say that the secret of the new supercapacitor’s success is the use of a combination of different materials and refer to the supercapacitor as "asymmetrical."

The Key is Graphene

Graphene consists of a single layer of carbon atoms, arranged in a two-dimensional lattice structure. Graphene is the strongest material ever tested and has electrical properties that make it attractive for use as an electrode. The positive electrode of the TUM supercapacitor is made with chemically modified graphene, combined with a nanostructured metal-organic framework, a so-called MOF.

"The high-performance capabilities of the material is based on the combination of the microporous MOFs with the conductive graphene acid," said Jayaramulu Kolleboyina, a guest scientist who worked at TUM on the research. The graphene MOF material has a large specific surface area and controllable pore sizes, along with high electrical conductivity. The large surface area allows a supercapacitor electrode to collect a large number of charge carriers, increasing its ability to store electrical energy.

Another advantage of the new graphene material is its strong chemical bonds between its components. Strong stable bonds mean that more charging and discharging cycles are possible, without a degradation in performance. Typical lithium-ion batteries have a useful life of about 5,000 charge and discharge cycles. The supercapacitor developed by TUM is said to exhibit 88% of its initial capacity after 10,000 cycles.

The graphene-MOF combination shows great promise, not only for high energy density supercapacitors but also for other types of electrodes used in electrical and energy storage devices.