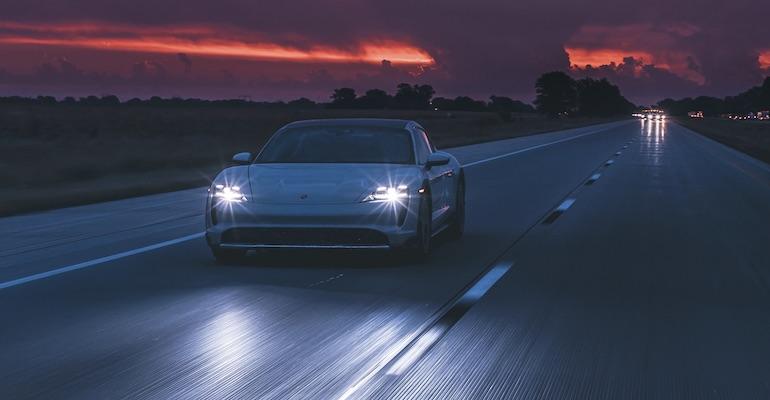 A Taycan Cross Turismo has entered the Guinness World Record books after setting a record for the greatest altitude change ever achieved by an electric car.

In the early days of automotive marketing, the publicity stunt was an important tool to attract the public’s interest and occasionally prove the capability of a new vehicle in an unusual circumstance. Electric vehicles (EVs) are the new kids on the block and the publicity stunt is back to prove their worth to a sometimes skeptical American public.

A Porsche Taycan Cross Turismo has just been driven on a “record-breaking” journey from the depths of a mine deep underground in Michigan’s Upper Peninsula to the top of a mountain, Pikes Peak in Colorado. In a little over a day, the car traveled a vertical distance of 15,888.8 feet which is just over 3 miles. In the process, they also traveled 1,413 miles across six states with a total travel time of 33 hours and 48 minutes.

Their achievement has been recognized by Guinness World Records – setting a record for the greatest altitude change ever achieved by an electric car. 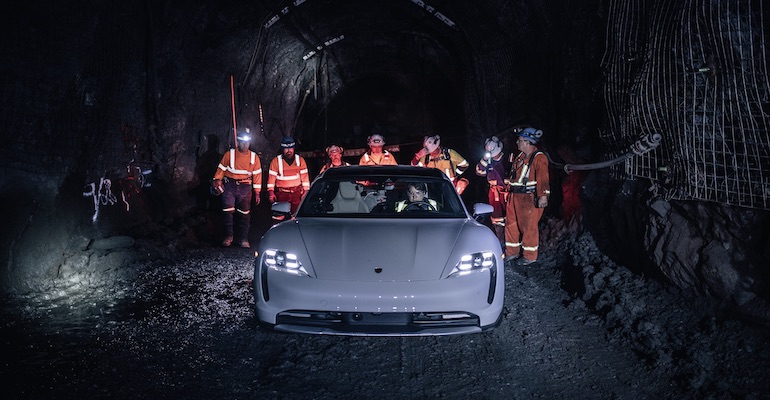 The lowest point in America is Badwater Basin in Death Valley, at 282 feet below sea level. But the team wanted to go deeper and so contacted the operators at Eagle Mine in Michigan’s Upper Peninsula. This high-grade nickel and copper mine is said to be the only mine in America where a car can be driven into its depths, down a ramp usually used by specialist mining vehicles.

Because the Taycan Cross Turismo is a pure battery electric vehicle (BEV) vehicle as well as being a capable off-roader with increased ride height and all-wheel drive, the staff at Eagle Mine allowed it to drive through the portal and into the tunnel itself—to a depth of 1,774 feet below sea level.

Darby Stacey, Managing Director for Eagle Mine, said in a Porsche news release: “It was fitting to have the Porsche Taycan drive to the bottom of our nickel and copper mine, as both elements are essential to electric vehicles. After numerous risk assessments, safety discussions, and detailed planning, our mine team was up to the challenge. We are proud to have worked with Porsche to safely execute and complete a new world record.” 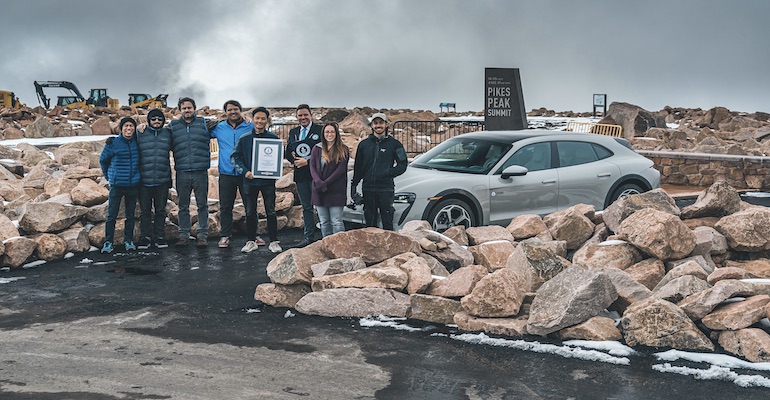 After driving the Taycan to the bottom of the mine, three teams of drivers set out across the country for the auto road that goes to the summit of Pikes Peak in Colorado. According to Porsche, the drivers encountered sun, rain, snow and ice, fatigue, and the ever-present threat that the mountain road – and the path to their record – could close due to the weather conditions.

The oxygen available to them at the start of the journey fell by 40 percent by the time they reached the top of the mountain, but as EVs aren’t affected by altitude it was only the drivers that noticed the ever-increasing elevation.

The Porsche reached the summit of Pikes Peak at 14,115 feet just before the snow started to move onto the mountain. The team recorded their efforts with separate, sealed GPS devices monitoring their route and altitude throughout along with an analog altimeter and witness logs to satisfy the Guinness World Records requirements.

“It started as a ‘what if?’ – a passion project, mixing our love for cars and travel and taking it to extremes,” said J.F Musial, the leader of the team. “We wanted to drive from the lowest point in America to one of the highest, Pikes Peak. The project relied on a lot of goodwill, and a car that’s pretty much unique in its mix of abilities.”

Sure, you can consider it a publicity stunt, but publicity might just be what EVs need as electrification of transportation moves into the mainstream. Well done!