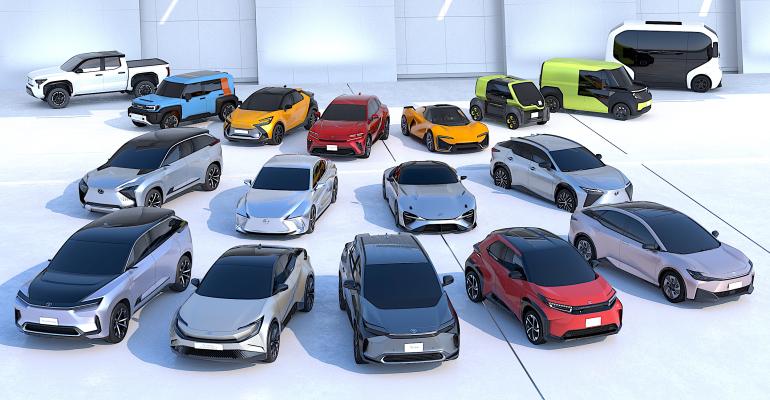 Start Slideshow ›
Toyota's family picture of its planned electric models.
Better late than never in the EV game, according to Toyota.

After years of battery-electric skepticism, Toyota has dedicated itself to full support for EVs with the announcement of plans for global sales of 3.5 million EVs by 2030.

That will include battery EV offerings in every vehicle segment, with the European, North American, and Chinese markets going EV-only by 2030, according to Toyota Motor Corp. president Akio Toyoda. Other markets will follow, so Toyota will be all-EV by 2035, he pledged.

Toyota pioneered fuel-saving hybrid-electric vehicles, starting with the Prius. And the company has poured money and effort into hydrogen fuel cell vehicle development. But in the global press conference announcing Toyota’s new strategy, Toyoda reminded the world of his company’s EV bona fides. “In 1992, we established the Electric Vehicle Development Division, and we introduced the RAV4 EV to the market in 1996,” he said. “After that, in the 2000s, we demonstrated our small prototype commuter EV ‘e-com’ in various places. Furthermore, in 2012, we introduced the ‘COMS,’ an ultra-small EV, and the small "eQ" EV. Thus, we have long explored the potential of battery EVs,” he noted.

And while Toyota has developed hybrid-electric and fuel cell technology, the company has continued researching batteries. “In the area of batteries, Toyota has continued to research, develop, and produce batteries in-house for many years,” he said. “While refining our technologies related to nickel-metal hydride batteries, we started accelerating the development of lithium-ion batteries in 2003. Furthermore, since having established our Battery Research Division in 2008, we have been advancing research on solid-state batteries and other next-generation batteries.”

Toyoda reminded skeptics that the company’s hybrid program has required developing the ability to produce batteries in high volumes, insisting that this experience “is an asset that gives us a competitive advantage.” Indeed, the company has built more than 19 million batteries for vehicle propulsion in the last 26 years, he added.

Now, with a focus on shifting entirely to EVs in half that period of time, Toyota will accelerate its battery efforts. “Going forward, we will increase our new investment in batteries from the 1.5 trillion yen announced in September to 2 trillion yen ($17.5 billion), aiming to realize even more-advanced, high-quality, and affordable batteries,” Toyoda said.

Of course, carmakers are reckoning with the reality that building huge numbers of batteries will require a huge volume of raw materials. “When it comes to natural resources, Toyota Tsusho began conducting lithium and other surveys as early as in 2006 and has been working to secure stable sources.”

Similarly, Toyota is working to develop renewable power for its manufacturing plants to ensure that production of these EVs is as green as possible, he added. “In the area of energy, Toyota Tsusho has been working to secure renewable energy sources such as wind and solar power generation for more than 30 years,” Toyoda said.

“Furthermore, at manufacturing plants, we are aiming to achieve carbon neutrality by 2035 by continuously making steady improvements toward reducing energy use and by expanding the use of innovative production engineering technology.”

This initiative includes an array of 30 Toyota and Lexus models spanning the model range from minicars to family SUVs and pickups. We have been left with disappointingly scant information on this array of EVs, so we can only look at the designs their studio has produced. Click through our slideshow to pick out your favorite 2030 Toyota or Lexus.