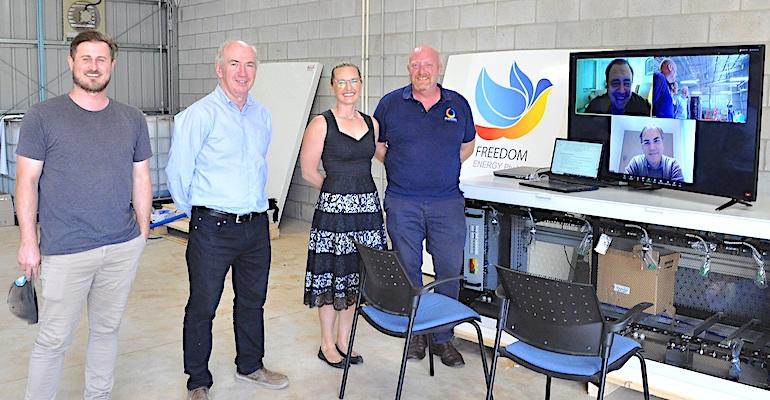 Solar power only works during the day, and wind turbines only produce electricity when they are spinning, so energy storage is necessary to provide a reliable renewable power grid that eliminates the greenhouse gas (GHG) emissions that the current fossil fuel (coal, oil, natural gas) power grid emits.

Storing electrical energy is usually accomplished by a reversible chemical reaction inside a battery. Lithium-ion batteries have become the poster child for energy storage for everything from cell phones and personal electronics, to electric vehicles (EV), to grid-scale storage of energy from renewable sources like solar and wind. But batteries based upon lithium aren’t the only option, and when there is a need to store huge amounts of power, at a single stationary location, at a relatively low price, the answer more and more frequently is the flow battery.

Lithium is One Way

A lithium-ion battery consists of a cathode (positive) electrode usually made up of nickel oxide along with some other elements like cobalt, manganese, and aluminum to help promote stability. The anode (or negative) electrode is typically made from layers of carbon graphite. In between the anode and cathode is an electrolyte (usually an organic solvent) that allows the transfer of lithium ions from one electrode to the other. When a lithium-ion battery is charged, lithium ions move from the metal oxide cathode, through the electrolyte, and imbed themselves between the layers of carbon graphite in the anode. This is called intercalation. During discharge, the ions move from the anode to the cathode where they intercalate within the structure of the metal oxide and in the process give up electrons that are used to power a device. The materials involved in all of this— primarily cobalt, nickel, and lithium—are expensive, and the organic solvent used for the electrolyte is flammable and can cause safety issues.

Instead of placing all of the reactive parts of the battery in one container, as in a lithium-ion cell, a flow battery stores reactive electrolyte liquids in separate containers and pumps them through a reactor tank that contains a stack of inert electrodes that strip electrons out of the electrolyte solution to produce electric power. An ion exchange membrane keeps the two electrolyte solutions separate from one another in the reactor. The capacity of a flow battery to store energy is simply related to the size of the containers holding the reactive liquids. This means that because energy is stored in the electrolyte, the amount of storage capacity is independent of the power level.

The material used for the two electrolytic solutions must form a reduction-oxidation (redox) couple, where reduction is the gain of electrons and oxidation is the loss of electrons. Commercially available flow batteries are made from either zinc and bromine or a combination of various oxidation and reduction states of the metal vanadium.

The vanadium flow battery (VFB) was first developed in the 1980s. Vanadium is harder than most metals and can be used to make stronger lighter steel, in addition to other industrial uses. It is unusual in that it can exist in four different oxidation states (V2+, V3+, V4+, and V5+), each of which holds a different electrical charge. A VFB uses two separate tanks of vanadium electrolyte, each of which holds different charges and that are connected to a central fuel cell stack.  Electrolyte from one tank is pumped through the fuel cell stack, where an ion exchange occurs across a membrane. When this exchange occurs, a reversible electrochemical reaction takes place, allowing electrical energy to be stored and, when the reaction is reversed, subsequently returned. Because the vanadium is dissolved in an aqueous solution, there is very little fire risk, unlike a lithium-ion battery that uses a highly flammable organic solvent electrolyte.

Late last year, a vanadium flow battery was installed at the National Battery Testing Centre (NBTC), a project of the Future Battery Industries CRC.  The 30kWhr battery was provided by Multicom Resources Limited in partnership with US-based StorEn Technologies Inc. The battery will be used to provide energy as part of the Australian Renewable Energy Agency (ARENA) funded H2Xport project at Queensland University of Technology (QUT) for use in their renewable hydrogen plant project that started in 2018 as a way to research hydrogen as a future energy carrier.

"The vanadium flow battery technology promises safe, affordable, and long-lasting energy storage for both households and industry," said QUT project lead and National Battery Testing Center (NBTC) Director, Peter Talbot in a QUT news release.  “There are many advantages over traditional battery energy storage systems such as 100 percent capacity retention, a lifetime of around 25 years, and ease of scalability. As it stores energy in liquid form, the capacity of the battery can be increased by simply increasing the storage tank volume,” he added.

Although grid-scale lithium-ion batteries are already in operation in Australia (for example the huge lithium-ion Tesla battery at Hornsdale in Queensland), the lower cost and long life of a flow battery make them particularly attractive. “Due to their inherent advantages in large-scale energy storage, vanadium flow batteries have the potential to service the growing need for grid-scale energy storage solutions in Australia, supporting and stabilizing the national electricity grid as renewable energy generators continue to roll out,” Talbot said. “This prototype allows researchers to test and develop safety standards for vanadium flow batteries, and helps bring the technology to the Australian market,” he noted.

Flow batteries can demonstrate advantages over lithium-ion batteries in both cost and safety—vitally important to the energy utility industry. The limited availability of raw materials required for lithium-ion batteries should be dedicated to applications where superior energy density is required, such as cell phones, laptops, personal electronics, and EVs, leaving power grid support as a perfect fit for the flow battery.