According to the American Lung Association, there more than 480,000 school buses are on US roads, carrying millions of children every day. Currently, 95 percent of these buses are diesel-powered. That’s a problem as there is scientific evidence demonstrating the effects of diesel exhaust exposure on the human body, including asthma attacks, premature deaths, and cancer. What’s more, children are especially vulnerable to poor air quality, as their brains and respiratory systems are still developing and exposure to diesel exhaust is linked to serious health effects in children, including asthma attacks and diminished brain function.

“Close to 25 million kids ride to school every day on diesel-powered school buses that emit millions of tons of pollution per year,” said American Lung Association National President and CEO Harold Wimmer in an American Lung Association news release. “All children deserve to travel to and from school safely, without inhaling dangerous exhaust fumes. The toxic pollution in diesel exhaust can harm children’s brain development and respiratory health.” One solution is to electrify school buses.

Related: Welcome to National Drive Electric Week: An Event That Advocates for EVs

Related: 15 Examples of How EV Variety is Defining a New and Wonderful World of Wheels

The nationwide support for zero-emission buses aligns with state-level polling results. In Arizona and Georgia, majorities of voters (69% in Arizona; 64% in Georgia) support the transition to zero-emission buses. In West Virginia, a majority of voters (60%) agree that it’s important to invest in electric vehicles, like buses, to reduce the impact of harmful pollution on children’s health. The Lung Association has determined that a federal investment of $20 billion would electrify one-fifth of all diesel-powered school buses in the US.

“There are a lot of advantages. First of all, the maintenance costs are 60-70% less. This bus has a 135-mile range, it’s a mid-level battery pack bus,” said Millar. “The average bus route that a school bus does is about 80 miles a day. So you could do two routes and then charge again overnight. We do have a bigger battery bus for longer distances—about 200 miles.” 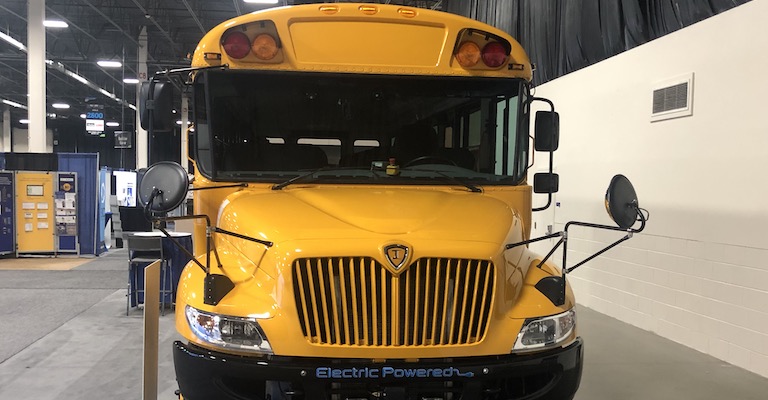 The battery in Navistar’s standard bus s 210 kilowatt-hours (kWh) and uses a lithium-iron-phosphate (LFP) chemistry. The larger battery is 315 kWh, also using LFP chemistry. The battery cells for both packs are made by the Chinese battery giant CATL. The bus uses a DANA TM4 motor that produces 215 horsepower. The Navistar bus took about 18 months to develop and is based upon the existing internal combustion engine (ICE) bus. It is in production today—it started production earlier this year—it’s produced on the same assembly line as the other IC buses in a plant in Tulsa, Oklahoma.

Charging the electric school bus is straightforward. “What we recommend for charging is either a 19.2 kilowatt (kW) AC charger or a 24 kW DC charger. You don’t need to charge fast but the bus can take up to 125 kW, so if you did need to charge in a couple of hours you could do that, but normally we recommend an overnight charge,” said Millar.

Different Experiences- at a Cost

Millar also noted that the experience for the bus driver and the passengers is different from a regular school bus. “It’s super quiet. The feedback we get from the bus drivers is that they can hear every conversation on the bus. The students quickly realize that they can be heard! Even on the long bus, if you are driving the bus you can hear the conversation on the last row. It’s a much more calm and relaxing experience for the students and the driver,” said Millar.

The cost of an electric school bus is almost twice the cost of a diesel bus and even with lower operating and maintenance costs that the electric offers, right now the buses need subsidies to be cost-effective for a school district. “You really need the grants to offset the cost because the starting point is so high,” said Millar. There is some hope that the costs could be reduced over time. “We expect costs to come down as volumes ramp up. If we could on-shore battery production it would go a long way to make these buses cost-competitive.”