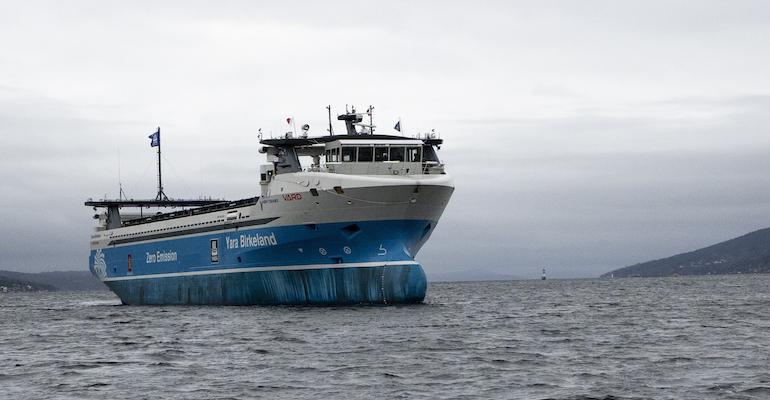 The new vessel that is fully powered by a lithium-ion battery system, prepares for commercial operation.

The Yara Birkeland, the world's first autonomous and fully electric container ship, will soon commence commercial operations while beginning a two-year test period, before entering full autonomous operation on a route off the coast of Norway. It is powered by a 6.7 megawatt-hour (MWh)  high-energy lithium-ion battery system built by Swiss company Leclanché.

The Leclanché Marine Rack System (MRS) uses liquid cooling to ensure optimum temperature control of the cells over a service life of at least 10 years. In addition, the MRS offers state-of-the-art protection against overheating and an integrated fire protection system specifically designed and certified for maritime requirements.

The vessel is approximately 80 meters long and 15 meters wide with a deadweight of 3,120 tonnes or 120 standard containers. This electrically powered vessel will operate at a service speed of approximately 6 knots, with a maximum speed of 13 knots.

The battery system of the Yara Birkeland, manufactured in Switzerland, is fitted with lithium-ion cells which are produced at Leclanché's automated production facility in Willstätt, Germany, and battery modules made in Switzerland. The high energy density cells combined with a long life cycle of 8,000 @ 80 percent depth-of-discharge (DoD), with operating temperature ranges from -20 to +55°C, are at the core of the battery system. This Leclanché Marine Rack System consists of 20 strings with 51 modules of 32 cells each, for a total of 32,640 cells. The battery system has built-in redundancy, with eight separate battery rooms: if multiple strings are emptied or stop working, the vessel can continue its operations.

The Yara Birkeland completed its maiden voyage to Oslo in mid-November and then sailed on to Porsgrunn, the southern Norwegian production site of Yara International, a fertilizer manufacturer, and the vessel owner.

Here Are 9 Vessels That Are Helping Norway Lead the World in Electric Ferries
Jul 13, 2021