Bosch Previews Industry Shift to Electrification at its Charleston Factory 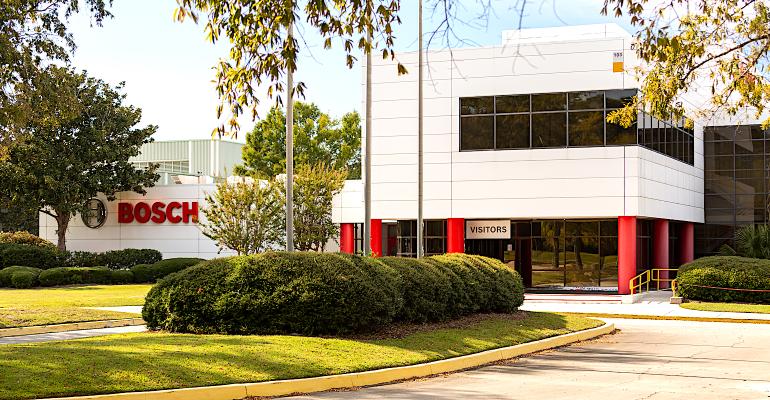 Start Slideshow ›
Bosch's EV motor plant in Charleston, South Carolina.
Bosch’s Charleston, S.C. plant has built more fuel injectors than any other factory in the world, but now it shifting to electric motors.

As the auto industry shifts from combustion power to electric power the effects cascade down through the industry’s supply chain. In preparation for that change, Bosch is shifting employees from making parts like fuel injectors for combustion engines to making electric motors for EVs.

The company’s Charleston, S.C. facility, for example, makes fuel injectors and fuel pumps. This isn’t just any plant, but the one that, with a production total of nearly 750 million fuel injectors, has made more of the devices than any other such plant in the world. But it has also begun making the electric motors used by Rivian for the company’s R1T pickup and R1S SUV and a new $260 million expansion is adding electric motor capacity to supply other as-yet-unnamed OEM customers for EV motors.

“We’ve invested more than $6 billion dollars in electromobility development and in 2021 our global orders for electromobility surpassed $10 billion dollars for the first time,” explained Mike Mansuetti, president of Bosch in North America. “Local production helps to advance our customers’ regional electrification strategies, and further supports the market demand for electrification.”

Bosch started building the Rivian motors at Charleston on Oct. 6. Previously the motors came from overseas plants, so now Bosch can supply its North American customers from the U.S. facility. It occupies 200,000 square feet of an existing plant, and the new business will require adding 75,000 square feet to the existing building. That expansion is slated to open by the end of 2023 and it will add 350 new jobs to the current 1,500 employees at the site.

“This launch delivers on a commitment to our associates and to the local community in Charleston,” said Mansuetti, who started his Bosch career as a manufacturing engineer on the fuel injector assembly line at the Charleston facility.

“We are in the midst of major shifts in mobility, and the story of reinvention in Charleston is a model for how electrification production can evolve from within an existing facility,” he said. “We are building on the long-standing expertise and commitment of the Charleston team with this new production.”

The Charleston plant specialized in components for diesel engines, which Bosch phased out in 2020. Faced with losing jobs and capacity, the plant aggressively pursued the opportunity to pivot from the dying diesel market to the burgeoning EV market. “It continues to open new opportunities for these associates as the future of mobility is rapidly evolving,” Mansuetti noted.

To preserve its existing facility and employees Bosch is retraining its employees in the new technology and the required techniques to build EV parts. This includes sending workers to Bosch’s German electric motor production plants for training and learning best practices.

Bosch is similarly converting its Anderson, S.C. plant from its role building transmission control modules to making fuel cell stacks for hydrogen-powered EVs. By 2026, the Andersen plant will add about 350 jobs in support of that fuel cell manufacturing. “The hydrogen economy holds great promise and at Bosch, we are all in,” said Mansuetti.