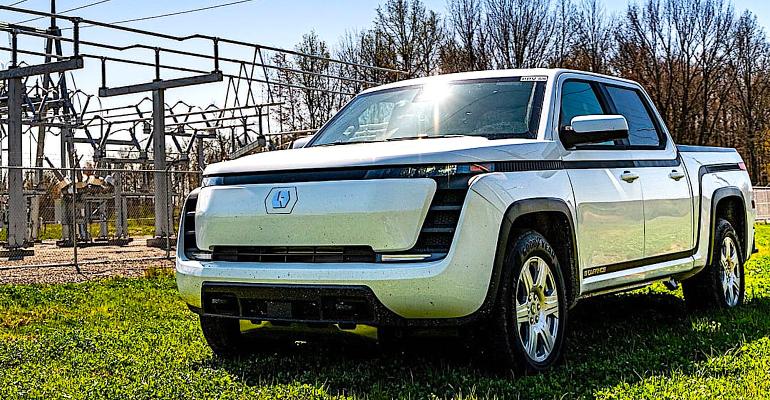 2023 Lordstown Motors Endurance.
The first batch of Lordstown Endurance commercial pickup trucks is rolling out of the Foxconn factory.

Lordstown Motors, the Ohio EV startup that seeks to build electric pickup trucks and commercial vehicles at a former General Motors assembly plant, has begun production of its trucks at the factory.

Lordstown acquired the factory from GM but has since sold it to contract manufacturing industry titan Foxconn, which seeks to break into the electric vehicle business.

The company has begun building its Endurance full-size pickup truck at a time when Ford has significantly raised prices on its electric F-150 Lightning. Lordstown says that it has completed the necessary crash testing and that it has submitted the required paperwork for EPA and California Air Resources Board certifications that it will need to sell the trucks.

This first batch of trucks is planned to include 500 vehicles, of which 50 are slated to reach customers this year. The rest will be delivered in the first half of 2023.

"We will continue to build at a slow rate as we address remaining part pedigree and part availability issues. We expect to increase the speed of production into November and December," said Edward Hightower, Lordstown CEO and President. "Our homologation and certification processes are proceeding as planned."

There’s an asterisk next to the delivery plans for the remaining 450 pickups, and that is apparently cash flow. Lordstown says that it will proceed with the construction of those trucks, depending on its success in raising additional capital. Current joint venture partner Foxconn is a candidate to provide that cash.

While building vehicles and delivering them to customers is a key advance, skeptics worry that this isn’t enough to turn the company’s financial fortunes. “I don't think we've seen evidence that Lordstown has solved its fundamental problem,” observed Motley Fool automotive industry analyst Travis Hoium in a report on Lordstown’s announcement. “The company needs to sell enough vehicles to cover operating costs, and even selling 500 vehicles won't do that,” he said. “Lordstown has an interesting product, but it doesn't have the scale of many of its competitors.”

The Lordstown Endurance pickup truck has interesting technical differences from the Ford F-150 Lightning, Rivian R1T, and upcoming Chevrolet Silverado. It is powered by four individual in-wheel motors that each directly turns its own wheel, so there is no transmission or axle shafts.

“Working in the battery department these last few months, we have made incredible strides, fine-tuning and improving our processes so that we were able to meet production,” said battery manufacturing engineer Chad Powell in a video posted on the company’s website. Hopefully, Powell and his colleagues will have the opportunity to exploit those improvements for full mass production in the future.

It’s not just a vehicle name. It’s what defines the hardworking people of America. We change. We hone our crafts. We sharpen our tools, and we plug-in to get work done.