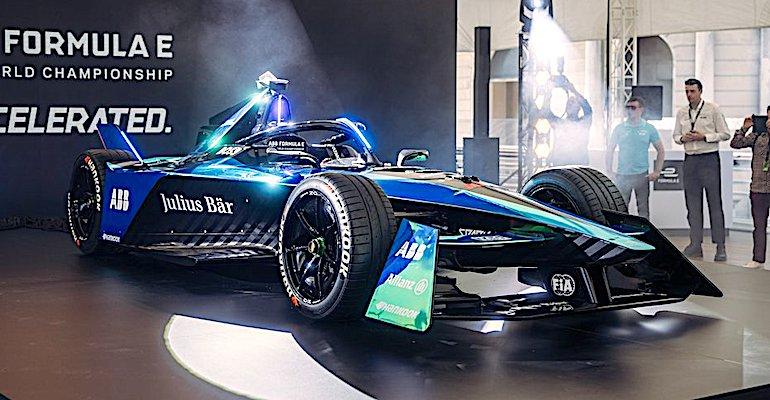 Start Slideshow ›
Click through the gallery for a look at some of the team's cars.
Formula E third-generation race cars display advanced new technology in a smaller, lighter package that should provide better racing.

The FIA Formula E racing series has unveiled the third generation of its battery-electric race car, which will go into use next season. This new car will provide substantial upgrades in performance and efficiency over the current second-generation cars used by the series.

An oft-stated goal of racing is to develop technology for use in production vehicles. We can see evidence of this in vehicles like the new Mercedes-AMG C 43, whose electric turbocharger technology is a direct descendent of those employed in Formula 1 racing.

Promoting electric vehicles and pioneering EV technology was a stated goal for the Formula E racing series, but the initial effort probably did more to highlight the shortcomings of EVs than it did to promote them.

With just 150 kilowatts of power, first-generation Formula E cars in 2014 were barely faster than the entry-level junior series where aspiring racers begin their careers, not rivals to global spectacles like Indy cars or Formula 1. Even worse, they lacked the battery range to complete a race. It wasn’t practical to charge them or swap in charged batteries, so the solution was to have drivers stop halfway through the race to change to another car with fully charged batteries!

Naturally, this did nothing to convince viewers that battery-electric vehicles were a practical solution for their own driving needs. Mid-life upgrades boosted power to 170 kW and improved regeneration efficiency by 50 percent. For its fourth, and last season, the Gen 1 cars’ power increased to 180 kW. All of this pointed to the series’ success at developing EV technology, despite the cars’ obvious shortcomings.

The 2018 racing debut of the second-generation cars saw them increase to 250 kW and a top speed of 174 mph. More importantly, the Gen 2 car’s battery could last an entire 45-minute race without stopping. The Gen 3 car will deliver some real performance gains for the 2023 season, with 350 kW of power and a 200-mph top speed.

In part three of our series '8 ways Formula E has always been accelerating change' you'll learn how @FIAFormulaE cars have evolved through the years.

The new car, built by Spark Racing Technologies with batteries from Williams Advanced Engineering, includes many interesting new details. For example, there is a generator on the front axle that contributes 250 kW of regeneration under braking to help keep the car’s battery charged. The car has only small front brakes and no friction brakes at all on the rear axle, where the drive motor provides 350 kW of regenerative braking power.

As a result, 40 percent of the energy the car uses during a race will be power that was recaptured under braking. That compares to 25 percent for the Gen 2 cars. The Gen 3 car’s combined 600 kW of regenerative charging is an important number. That’s because these cars can be recharged during pit stops, and their DC fast chargers are built to pump in electrons at that same 600-kW rate. That compares to a peak power for commercial DC fast chargers of 350 kW.

The changes produce a car that will be between 2 seconds and 5 seconds per lap faster than the current cars, depending on the track.

“Gen3 is the pinnacle of electric technologies for motorsport applications and provides a laboratory for future mobility,” boasted FIA Formula E Technical Manager and Gen3 project lead, Alessandra Ciliberti. “We see that across the car with the improvements we’ve made in this generational leap,” she continued.

Ciliberti points to the advancements in the car’s batteries in particular. “The front powertrain kit and state-of-the-art battery cells that are capable of discharging faster with a higher capacity than the current battery but with a reduced footprint,” she said. “It’s far smaller and lighter than the road-going equivalents and there’s potential for that technology to transfer and for manufacturers to apply it to their consumer vehicles.”

While prototypes have performed only limited testing so far, test driver Benoit Treluyer has been able to make some observations. As a driver who has raced all three generations of the Formula E car, he acknowledged the improvements made by the current cars over the originals. “Gen2 was a good step. It was more powerful, no car swaps as with Gen1 with the bigger battery capacity and drivability is good,” he said. “It wasn’t a huge step in driving feel – mainly in power and design – but Gen3 for me is where that really big step comes in.”

That is exactly what fans and drivers alike are hoping. “Traction and front grip are key when racing around streets and it feels great. Downforce is really good as well – you could really feel what was missing when we tested without various bits of the bodywork

Brakes are an often overlooked aspect of racing cars, but the heavy emphasis on electrical regenerative braking in the Gen 3 car makes this a new area for customization, Treluyer predicts. “You can play with the software to balance the braking feel. It gives the drivers more options and it will be really interesting for drivers to try unique things with the brakes – directional braking, and more braking power on certain corners of the car, for example,” he said.

An important factor to consider when relying on regenerative braking is that cars with fully charged batteries have no place to put that power, and so they cannot brake as hard as they can once the batteries have been discharged a bit. “Batteries are full at the beginning and regen is more difficult then, so strategies will be completely different and teams will go in different directions,” Treluyer said. “Some drivers might start hard and others might try to be more conservative.”

Anyone studying the Gen 3 car’s drivetrain configuration, with its rear motor-generator and front generator is surely pondering the possibility of employing that front motor to put power to the road. Ciliberti acknowledges that as a planned path of development for the Gen 3 car. “We’re investigating using the front powertrain kit in traction as well as regen to allow for four-wheel drive-in specific scenarios and then looking even further to Gen 4 we have to ensure Formula E remains at the forefront as the laboratory for future mobility.”

All of these changes mean that the Formula E cars are no longer too slow and impractical to impress race viewers, and the cars are proving their value as testbeds for improved EV technology. The Gen 3 cars look set to put on a good show for fans and to impress engineers evaluating their technology for use in production vehicles.