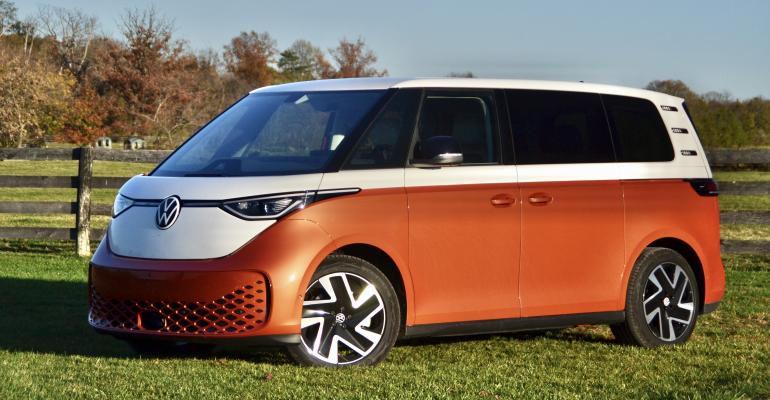 Volkswagen is showcasing the benefits of EV platform sharing, where various bodies can be mounted atop an agnostic “skateboard” platform to address different markets. And few markets are as hot as the interest in VW’s revived classic hippie bus, the ID.BUZZ.

We’ve had the chance to spend some time behind the wheel of a European-market version of the van, which is on sale there now with a base price of $67,000. The U.S.-market ID.BUZZ arrives in dealers in 2024 and will feature a longer wheelbase and a third row of seats, which are requirements in the U.S. family vehicle market.

Still, with the same platform beneath, we’ve been able to garner some impressions of the ID.BUZZ that will be relevant to the U.S.-market version.

To start: the ID.BUZZ rolls on VW’s Modular Electric Toolkit (MEB is the German acronym), which, as in the ID.4 crossover SUV, includes an 82-kilowatt-hour lithium-ion battery pack (77 kWh usable capacity) and a 201-horsepower electric motor driving the rear wheels.

VW says that it will go 263 miles on a full charge and we found that our drive extrapolated to 210 miles of mostly exurban two-lane highways during mild daylight weather. The company says that it will charge at a rate of 170 kW, but because our test vehicle incorporated the European Mennekes-style charge port rather than a U.S.-style SAE J1772 port.

These AC charging ports are both accompanied by a Combined Charging System (CCS) DC charging connector, but as the AC and DC ports are paired, you can’t use a U.S. DC fast charger because the CCS portion of the plug is paired with the SAE J1772 AC plug.

Driving the ID.BUZZ is pleasant and quiet, with the 201-hp power more than enough for regular driving despite the explosion of electric horsepower in some EVs. However, the ride is very stiff and the low-profile tires on the 20-inch wheels provide little compliance, so passengers in the ID.BUZZ get bounced around pretty vigorously.

Lengthening the wheelbase for the U.S.-market version will surely help, but most of the bumps seem to be a side-to-side rocking motion. Softer springs, better dampers, and smaller wheels with taller-sidewall tires could all improve this problem and VW has plenty of time to sort out the final U.S. specifications before delivering the vehicles in 2024, so ideally they will get this done before delivering buses to customers.

Most of the driver controls and interfaces are borrowed from the ID.4, and we weren’t thrilled with those when we drove the SUV. Capacitive-touch controls for door locks and radio volume are an annoyance. The power window switches don’t have the irritating switch to change from controlling the windows in the front doors to controlling those in the rear doors (as is the case in the ID.4) because the ID.BUZZ doesn’t have windows that open in the rear sliding doors. This suggests that people whose kids are prone to motion sickness who need to provide some fresh air from time to time will not be excited about this aspect of the van’s design.

Those kids, and some shorter adults, might wish for a stepladder for getting into and out of the ID.BUZZ, because mounting the battery pack beneath the floor raises it to an SUV-like 22 inches from the ground without the benefit of a running board to aid step-in. There is a cutout around the door opening providing a toe hold at 19.5 inches, but even this is still two inches higher than VW’s last U.S. market minivan, the Routan.

An important difference between the ID.BUZZ and the ID.4 is that the van is nearly six inches wider than the SUV. However, the seats seem to still be located in the same place, relative to the vehicle's centerline. This pushes the doors quite far from the occupants, putting the door panel-mounted armrests out of reach.

VW has addressed this by adding fold-down armrests to the sides of the seats. This works fine until it is time to get out. Then you need to remember to lift the outside armrest or risk getting a jab in the ribs to remind you.

An upside of the added space is that the door-mounted cupholders are big enough for the jumbo-sized water bottles so many of us carry these days.

It will be interesting to see if VW can improve the issues that are easily fixable before releasing the U.S. version and whether there are innovative solutions to baked-in challenges like the high floor that could be deployed. We’ll find out in 2024.