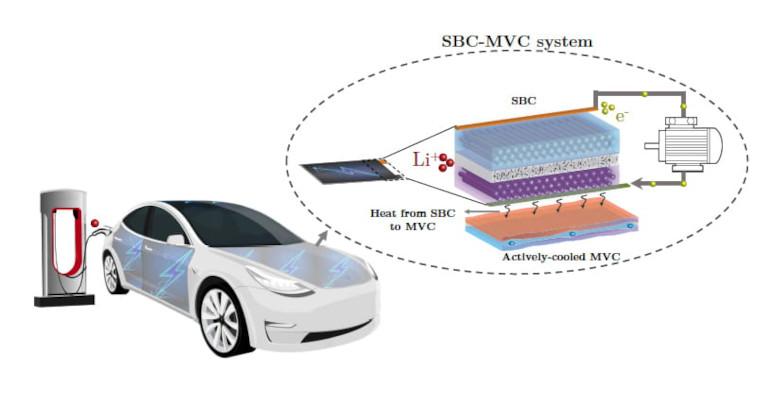 A new system can map out specifications for next-generation devices in terms of weight, staying cool, driving range, and other parameters.

Researchers have designed a novel optimization and cooling system to help keep electric vehicle (EV) batteries from overheating as well as to promote the achievement of other performance parameters in an effort to pave a more sustainable way for their long-term use.

Researchers from Drexel University created the system to balance numerous factors of carbon-fiber-based batteries that can act both as structural components of EVs as well as batteries to provide optimal specifications for their design. The system provides a micro-vascular like cooling network of composite materials that can help prevent devices from getting too hot and malfunctioning or even catching fire, they said.

The method developed by a team led by Ahmad Najafi, an assistant professor in the university’s College of Engineering, balances performance-enhancing factors, such as battery capacity and conductivity, against variables that add complexity--including weight and thermal activity, which can hinder performance and cause malfunctions.

The overall goal of the system is to provide the best battery package specifications for any EV design, researchers said in an abstract for a paper on their work in the journal Composites Part B: Engineering. It does so by calculating the best pattern, size, and number of microvascular channels to quickly dissipate heat from the batteries, as well as optimizing the design for flow efficiency of the coolant moving through the channels, they said.

“The proposed optimization scheme is aimed to maximize the driving range of EVs while making sure that the battery pack during operation would not overheat and also shows promising mechanical integrity,” researchers wrote.

Najafi likened the cooling composite system to a radiator in an internal combustion engine vehicle. “The coolant draws in the heat and pulls it away from the battery composite as it moves through the network of microchannels,” he said in a press statement.

Researchers worked with a carbon-fiber battery, which already reduces the amount of weight batteries have versus the energy they carry—a key factor inhibiting performance, researchers said.

For this reason, scientists and car manufacturers have been eyeing the use of solid batteries, such as a thin, carbon fiber-based version of the larger lithium-ion batteries typically used in EVs, because they can cut the weight of the vehicle, researchers said.

Indeed, reducing a car’s weight by just 10 percent can boost its mileage efficiency between charges by as much as 6-8 percent according to some estimates that researchers cite.

Using a carbon-fiber composite that can play a dual role both as a structural component of the vehicle as well as the battery then can reduce the overall weight of the vehicle and improve its ability to store energy, researchers noted.

Much has been made about how hot typical lithium-ion EV batteries get when trying to meet the power needs of the vehicle.

However, solid-state batteries—because they use a solid polymer instead of a liquid electrolyte—will show this tendency even more, Najafi said. This is because the conductivity of the polymer electrolyte is much smaller than that of the liquid electrolytes used in lithium-ion batteries, causing electron bottlenecks that generate heat, he said.

Researchers drew inspiration from the human body’s vascular system, which is nature’s own cooling method for dissipating heat, for the thermal-management system they created.

They modified a custom design tool to create an optical microvascular network that can aid in the design of cooling composites. These materials can be integrated into the structural battery packaging that’s currently being tested by companies like Tesla, Volvo and Volkswagen, researchers said.

Researchers also built into the system parameters for the carbon fiber’s use in the battery, such as thickness and fiber directions in each layer of carbon fiber, volume fraction of fibers in the active materials, and number of microvascular composite panels required for thermal regulation, they said.

Once they had parameters in place, they tested various combinations to ensure that they met vehicle structural integrity standards. Then they simulated the energy demand of a vehicle at various speeds over a duration of several minutes, while recording the temperature of the battery and the predicted range of the vehicle.

Their research showed that their system could improve the driving range of a Tesla model S by as much as 23 percent. However, its real value would be to help scientists discover the best combination of battery size and weight —including enough cooling capacity to keep it functioning — for any EV in production now and any future designs, Najafi said.

“While we know that every bit of weight saving can help improve the performance of an EV, thermal management can be just as important – perhaps more, when it comes to making people feel comfortable driving them,” he said in a press statement. “Our system strives to integrate improvements in both of these areas, which could play an important role in the progress of electric vehic