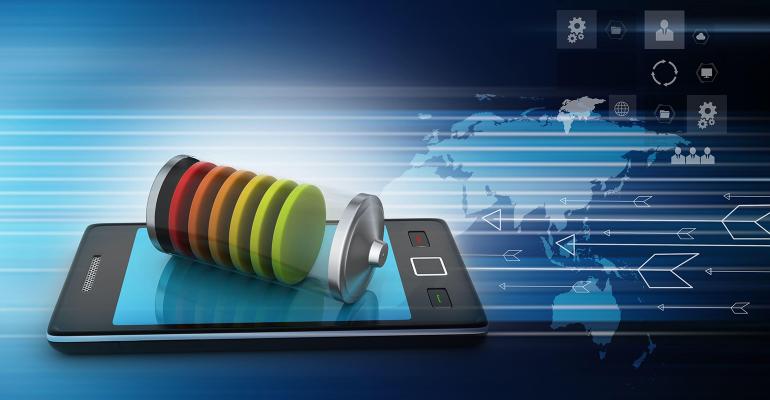 University of Essex researchers have developed an app to automate changes in smartphone functionality to optimize performance and battery life.
EOptomizer, which is being pitched to device-makers, also adds energy efficiency to save users money and reduce their carbon footprint.

Artificial intelligence (AI) is revolutionizing everything from materials science to robotics. Now it also may be the answer to making your smartphone battery last longer and run more efficiently, thanks to a new application developed by researchers at the University of Essex.

EOptomizer, an application developed by a team at the U.K.-based institution, uses AI to automate changes in functionality in mobile devices to bolster their efficiency and reliability.

Researchers believe it has the potential to increase a device’s battery life by 30% as well as shave kilowatts and, therefore, costs from users’ energy bills, they said.

The technology—developed by a team led by Amit Singh, a professor in Essex’s School of Computer Science and Electronic Engineering—also can be used in other applications,  such as in automobiles, smart appliances, and computers’ batteries,  he said.

“It is our hope that this app will help make everyone’s life better, save them money and help save the environment,” Singh said.

Researchers designed EOptomizer to optimize certain aspects of a device’s functionality, such as chip performance, heat generation and efficiency.

For example, someone might be scrolling through a news app to check headlines, which requires a higher frames per second (FPS) on the device than when someone scrolls more slowly down a news feed and reads more stories in full.

In this case, the AI of EOptomizer would understand the change in FPS for the app being used in each case and try to find the best operating frequency of CPU and GPU processors during each type of use, researchers said.

In the meantime, it also would optimize consumption for the least amount of power and temperature gain in the device--a critical issue in mobile phones that drains a battery, they said.

The overall goal of the technology, which has on its development team former Samsung, Microsoft and HCL Technologies engineers—is to reduce the significant carbon footprint created when smartphone users replace phones every year or two to achieve the performance gains of the latest technology, Singh said.

“Considering approximately 50 billion devices by 2025 and many more thereafter, EOptomizer has great potential to help to achieve net zero emissions goal of the U.K. and the whole world,” he said.

To help achieve this goal, researchers are pitching the technology to smartphone manufacturers such as Nokia and Huawei for potential integration into future devices.

“This will be the first step on what we hope is a journey that will see our app in the hands of consumers across the globe,” Singh said.

Elizabeth Montalbano is a freelance writer, journalist and therapeutic writing mentor with more than 25 years of professional experience. Her areas of expertise include technology, business and culture. Elizabeth previously lived and worked as a full-time journalist in Phoenix, San Francisco and New York City; she currently resides in a village on the southwest coast of Portugal. In her free time she enjoys surfing, hiking with her dogs, traveling, playing music, yoga and cooking.