The Relationship Between Flashlights and Batteries 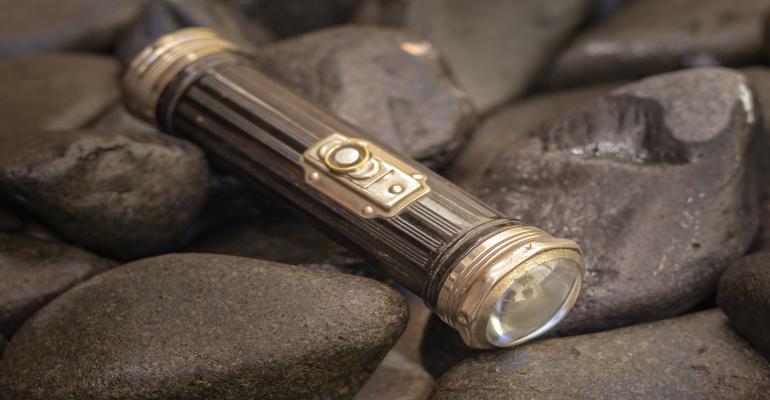 The linked history of the dry cell battery and the flashlight are an interesting example of ingenuity and serendipity.

If you are of a certain age, your first memories of batteries might be changing the big and clunky D-cells in your flashlight. Dry-cell batteries and flashlights are inexorably connected together—both in their timeline and their functionality. How that came to be is an example of ingenuity and inventiveness at its best.

Let’s start with the dry cell battery. In 1886, The National Carbon Company (NCC) was founded in Cleveland, Ohio by former Brush Electric Company executive W. H. Lawrence, along with Myron T. Herrick, James Parmelee, and Webb Hayes, who was the son of US President Rutherford B. Hayes. In 1894 the company began marketing Leclanché wet cells, one of the most advanced batteries of their day. But wet cells, as the name implies, carried a liquid that could be spilled and was not very portable.

Under the direction of George Little in the NCC labs near Cleveland, E. M. Jewett began working on the concept for a dry cell that could compete with the Leclanché wet cells. The result was a paper-lined, six-inch, 1.5 volt cylindrical sealed dry cell.  The trademark "Columbia" was proposed by NCC sales manager Nelson C. Cotabish, and in 1896 the company became the first to market a battery intended for widespread consumer use.

This was no small achievement. In fact, The American Chemical Society has designated the development of the Columbia dry cell battery as a National Historic Chemical Landmark, and on September 27, 2005, issued a commemorative plaque that reads:

In 1896 the National Carbon Company (corporate predecessor of Energizer) developed the six-inch, 1.5 volt Columbia battery, the first sealed dry cell successfully manufactured for the mass market. The Columbia, a carbon-zinc battery with an acidic electrolyte, was a significant improvement over previous batteries, meeting consumer demand for a maintenance-free, durable, no-spill, inexpensive electrochemical power source. Finding immediate use in the rapidly expanding telephone and automobile industries, Columbia launched the modern battery industry by serving as the basis for all dry cells for the next sixty years.

In 1898, the company introduced the first D cell battery with a nominal diameter of 1.3 inches (33.2 mm) and an overall length of 2.42 inches (61.5 mm). The smaller size of the D-cell was important for what came next—the invention of the flashlight.

It all started with a Russian immigrant named Conrad Hubert (whose given name was Akiba Horowitz.) In 1888, he founded the American Electrical Novelty and Manufacturing Company. At the time anything having to do with batteries and electricity was new and Hubert found a market for items like neckties and flowerpots that lit up.

In 1897, Hubert met David Misell, an English inventor who was living and working in New York. Misell was developing the idea of a portable light, operated by the newly introduced dry cell batteries. Hubert recognized the value of the work and on January 10, 1899, US Patent 617,592 was granted to Misell and assigned to American Electrical Novelty and Manufacturing Company. One of the witnesses on the patent drawings was Conrad Hubert. The invention consisted of three D-cell dry cell batteries placed end-to-end in a fiber tube, with brass end caps and the small electric light bulb at one end. A simple brass contact switch turned the light on and off. The D-cell had arrived just in time to make Misell’s portable light source possible. (Image source: US Patent Office)

What’s in a Name?

Hubert applied for a trademark as Ever-Ready and called the invention the “Flashlight”, largely because, at least initially the lights had to be turned off after a short period of operation to allow the zinc-carbon batteries to “rest.” The initial carbon-filament light bulbs were also short-lived but replacing them with tungsten filament bulbs improved the device.

In 1906, National Carbon Company (remember them?), which had been supplying battery materials to American Electrical Novelty & Manufacturing Company, bought half interest in Hubert’s company for $200,000. They changed the name to The American Ever Ready Company and the trademark name from 1899 was shortened to Eveready. By 1914, The American Ever Ready Company became part of NCC, becoming a maker of both batteries and lighting products.

By 1922, a variety of different designs were available, including the classic cylindrical version, a self-standing lantern-shaped version, reflector types for lighting large areas, and small pocket types. In 1922, more than 10 million flashlights were in use in the US.

In 1927, the 90° angle head, brass bodied Eveready No. 2697 Boy Scout Flashlight was introduced. This became the basis for the US Army TL-122 flashlight that was adopted just prior to World War II. The “TL-122” designation was stamped into the head instead of the BSA emblem and the body of the flashlight was painted Army olive drab. GI Joes knew how to keep their Boy Scout flashlights working, so it was not a stretch that the Boy Scout flashlight could go to war. The brass housing was later (1943) changed to plastic during the war as brass was a strategic material. The TL-122 was used by the USA, British, Italian, and French military forces.

For the Vietnam era, an improved model of the Eveready flashlight was introduced. Called the MX-991/U, this flashlight carried the impressive designation: "FLASHLIGHT: Electric, Portable, and Hand Lighting Equipment, 2-cell, w/ lamp, and lens filter, w/o batteries, Type I Class A (21108) MX991-U" and entered service in January 1961.

Modern flashlights (or at least those that aren’t part of your cell phone) follow the same basic principle as Misell’s original design. In the 1950s, the small AA-size battery became popular in what was called the penlight that was just slightly larger than a ballpoint pen. Since then, longer-lasting incandescent light bulbs, better batteries, and, more recently, Light Emitting Diodes (LEDs) produce an intensely powerful light that can last for many hours. There are a variety of options, but the intent is the same as it was in 1899—turning night into day. (Image source: Wikimedia Commons)