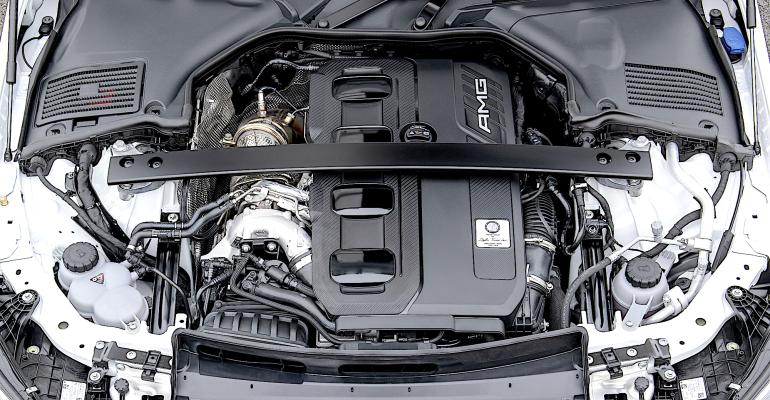 The Mercedes-AMG C 43's engine cover is cut away to reveal the Garrett E-Turbo on the left side of the photo.
Electric turbocharging not only contributes to the combustion engine’s power, it also charges the hybrid-electric battery.

The new German hot rod features Garrett E-Turbo technology that makes the car both faster and more efficient. This has long been the promise of electrified turbochargers, and we’ve seen them used to great effect in Formula 1 racing, but now we finally have some real-world production model specifications to back up the predictions. 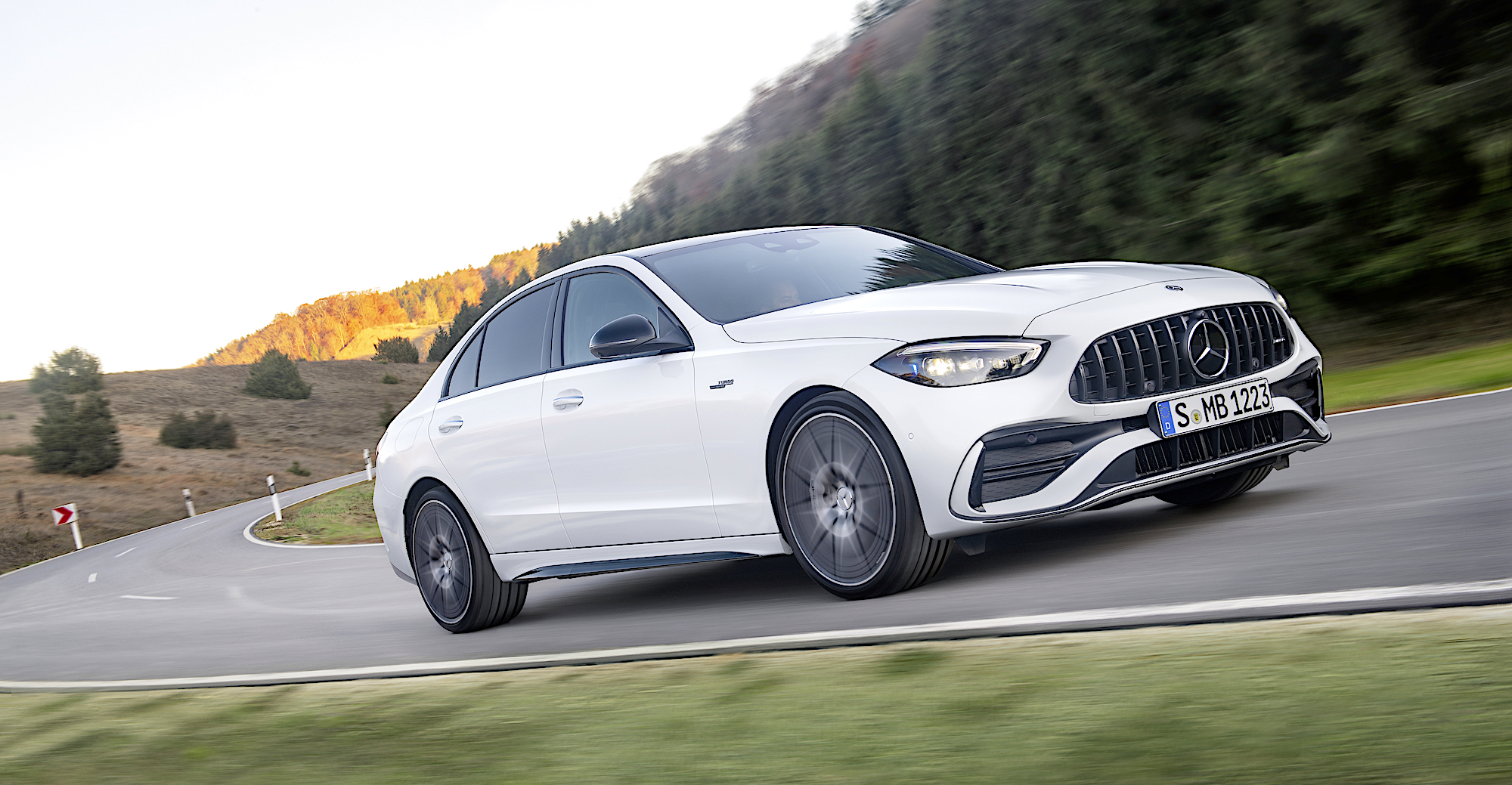 The C 43’s M139l engine is a turbocharged, mild hybrid 2.0-liter four-cylinder engine that is rated at 402 horsepower with the ability to boost output using the 48-volt hybrid motor/generator by 13 hp, for a total peak power of 415 hp. In comparison, the same basic M139 engine with a conventional turbocharger and no hybrid assist is rated at 382 hp, which previously made it the world’s most powerful four-cylinder engine.

This power propels the C 43 to 60 mph in just 4.6 seconds and to an electronically limited top speed of 155 mph in the base configuration. With the optional 19-inch or 20-inch wheels and their higher-speed-rated tires, the top speed is raised to 165 mph.

The M139l delivers its output of 402 hp at 6,750 rpm and maximum torque of 369 lb.-ft. at 5,000 rpm. The combustion engine is a closed-deck block for maximum rigidity that allows peak combustion pressures of up to 2,300 psi. In a closed-deck block, the areas around the tops of the cylinders when seen with the cylinder head removed are mostly solid, and the cover plate is penetrated only by smaller ducts for the coolant and engine oil.

Friction by the pistons within the cylinders is reduced by a coated lining that provides a mirror-like surface that is twice as hard as conventional gray cast-iron liners. This is a technology used in racing that made its production debut for Mercedes in the company’s AMG M156 V8 engine.

The M139l also benefits from two-stage gasoline injection that combines both direct injection and manifold injection. The fast and precise piezo direct injectors deliver fuel into the combustion chambers at pressures of up to 2,900 psi. At wide-open throttle, the engine needs even more fuel, so intake manifold duct injection activates to achieve the engine's high power output.

Such high power density demands a sophisticated cooling system that can cool the cylinder head and crankcase to different temperature levels. The aim here is to cool the cylinder head for maximum power with efficient ignition timing while keeping the crankcase warm to reduce internal engine friction. This is done using a constant mechanical high-performance water pump for the head while the crankcase is cooled by a second, electrically driven water pump on an as-needed basis. 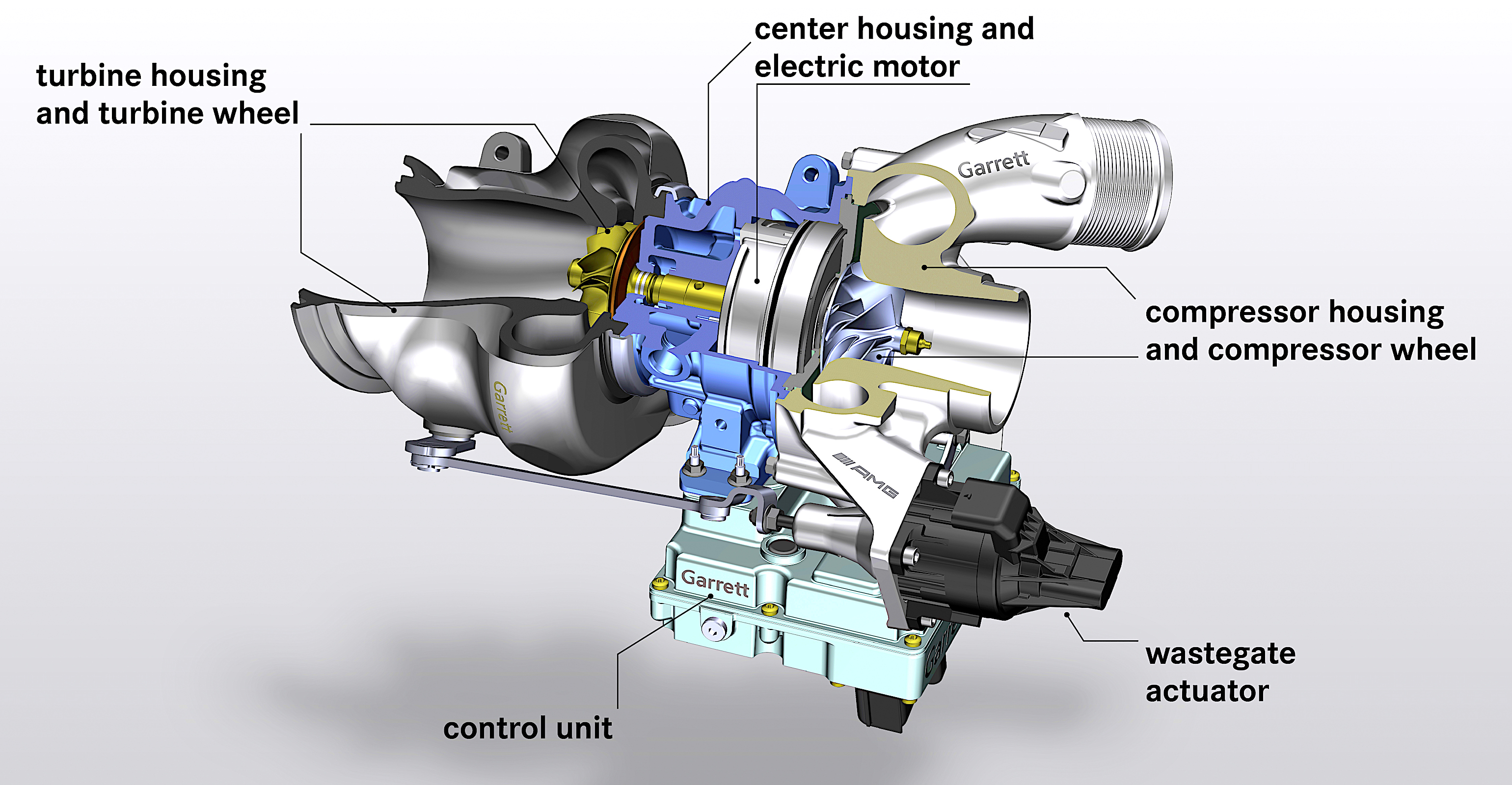 But these features only lay the foundation for the engine’s party trick, which is its Garrett electric turbocharger, which both uses electric power to preserve boost at all times and which generates electric power during constant throttle conditions. This electric power can then be applied to the 48-volt belt-drive mild-hybrid motor-generator to boost engine power as needed.

“The catalyst for the E-Turbo is the wave of electrified powertrains being developed in the industry,” said Craig Balis, Garrett's chief technology officer at the product’s announcement during the Frankfurt motor show. “Electrified hybrid powertrains are the fastest-growing segment in the industry, projected to grow to more than 40 percent of all vehicles in the next five to ten years.” Combining electrified turbocharging with mild hybrid-electric drive contributes to a 10 percent efficiency improvement while boosting horsepower and torque, he said. Adding an electric motor to the exhaust-driven turbo gives the device 4 times faster transient response, Balis added. 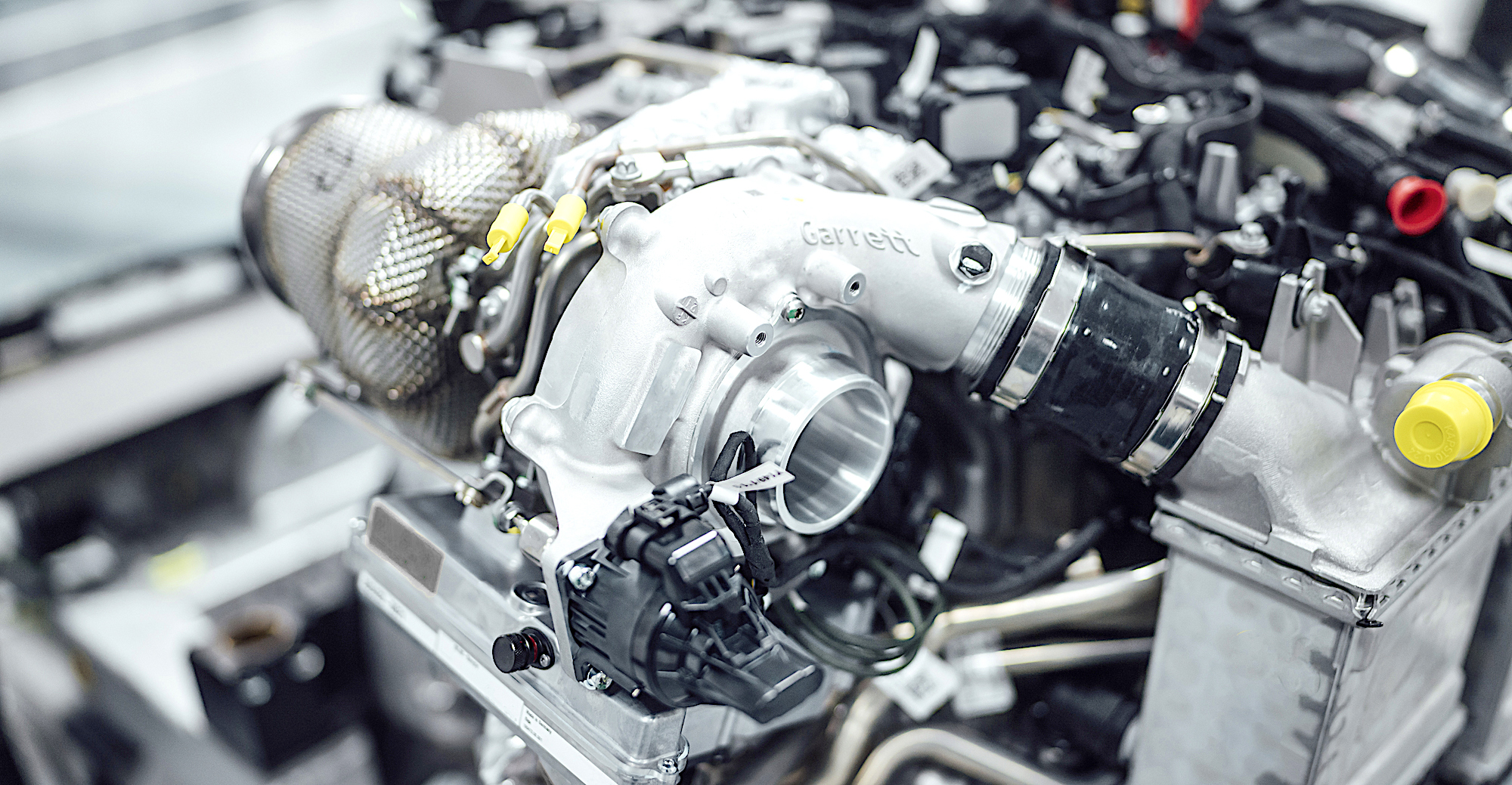 The Garrett E-Turbo's air intake is visible at the center of the photo.

The electronically controlled motor drives the shaft of the turbocharger directly, accelerating the compressor wheel before the exhaust gas flow takes over the drive in a conventional manner as engine rpm rise. This significantly improves the response directly from idle and across the entire rev range, helping the combustion engine react more spontaneously to accelerator-pedal input.

The ability to carefully tailor boost lets the C 43’s engine management system run as efficiently as possible, which aids the car’s fuel efficiency. “The instant boost of the E-Turbo helps the engine run advanced combustion techniques, while the electric regeneration capability allows it to harvest exhaust energy which would normally be wasted,” said Balis. “This unique combination of boost and electric energy recovery is what makes the E-turbo so exciting.” 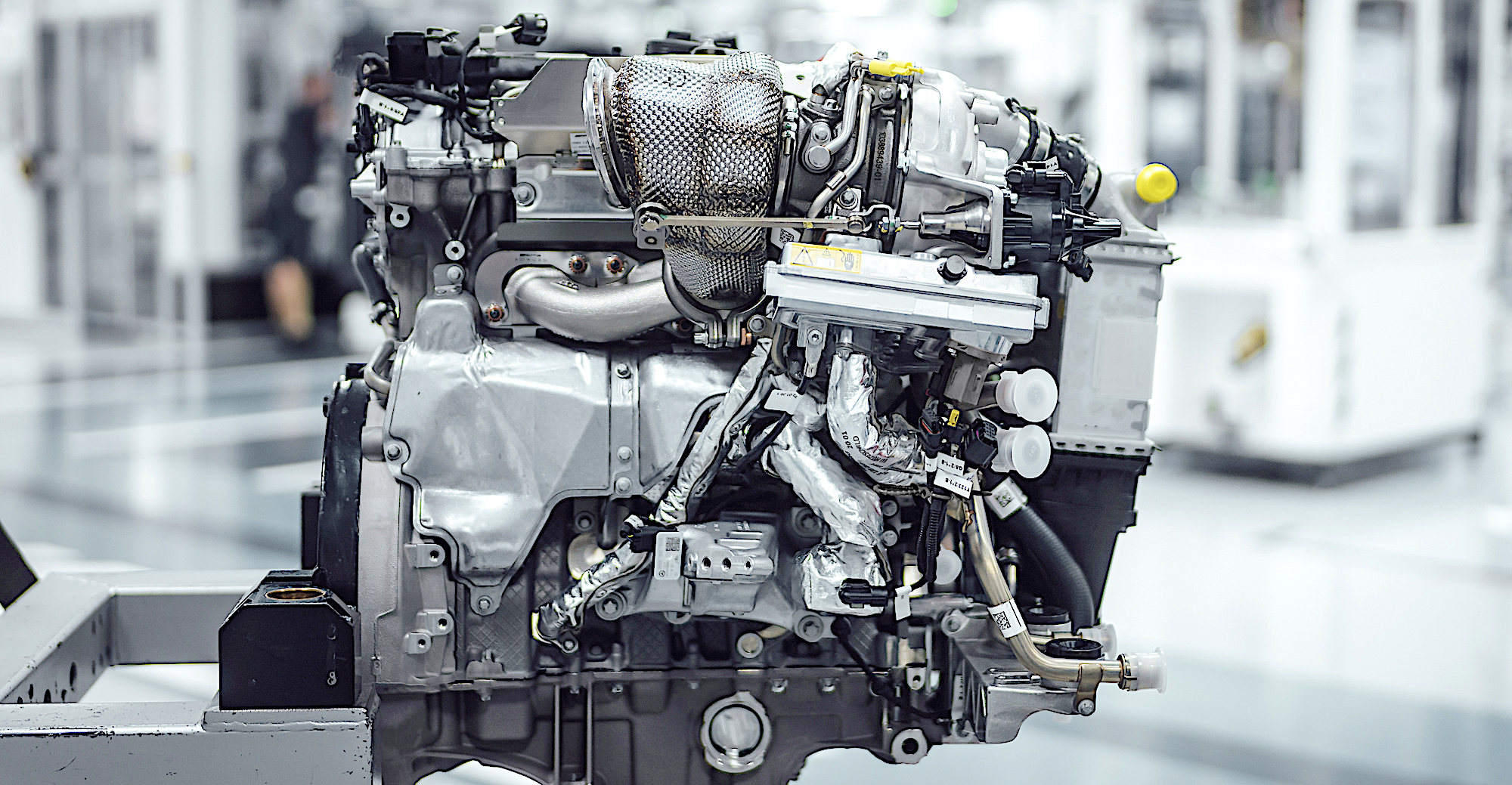 The heat shielding on the left side of the turbocharger hints at the extreme temperatures faced by the E-Turbo's electric motor, which is sandwiched into the middle of the turbo.

The C 43’s turbo spins at speeds as high as 175,000 rpm, but Garrett has designed the E-Turbo for even higher speeds. “We have had to invent high-power electric motors that can run at more than 200,000 rpm while being centimeters away from the turbine operating at 1,000 degrees Centigrade,” Balis said. “The electronic and control technology needed to achieve this is at the cutting edge. We’re at 30,000 Hz switching speeds while also optimizing electric motor power, turbine wastegate position, and variable geometry compressor operation.”

We will learn Garrett’s and Mercedes-AMG’s success at integrating the E-Turbo and 48-volt mild hybrid systems when we get a chance to drive the AMG C 43 later this year.