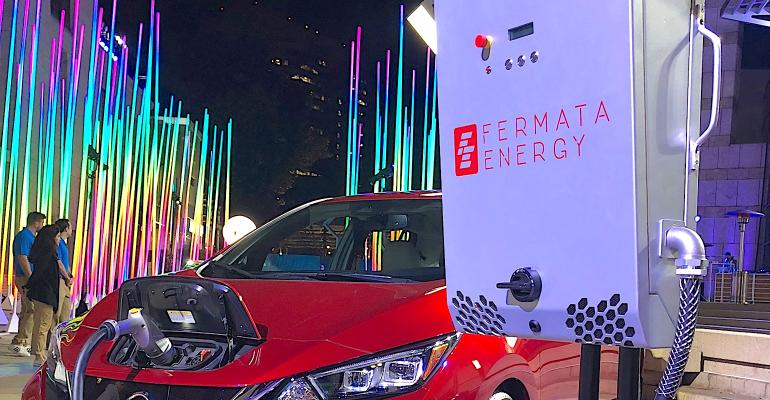 A joint project with electric utility Roanoke Electric Cooperative confirms the advantages of using vehicles to balance the grid’s load.

Electric vehicle advocates like to point out that one of the advantages of an electrified fleet is the potential to use these cars’ batteries to buffer the electric grid during surges in demand. The theory is that with millions of these cars plugged into the grid, when a heatwave causes afternoon power demand for air conditioners to peak in brownout territory, a smart grid could tap the juice previously stored in the batteries of cars that are sitting, plugged into their chargers.

The Texas cold snap last winter illustrated the cold-temperature version of the same issue. Having cars plugged into the grid could prevent the kind of power outages that Texas experienced, EV engineers say.

Fortunately, that possibility is no longer just a theory, thanks to a project by Charlottesville, Va.’s Fermata Energy and the Roanoke Electric Cooperative in Ahoskie, N.C. Fermata was founded in 2010 to design, supply, and operate technology to integrate vehicles with buildings and the electric grid. The Roanoke Electric Cooperative was formed to bring power to the farms of rural northeastern North Carolina and today it serves about 14,000 members, including a variety of industrial, recreational, educational, and community interests.

The coop has been testing Fermata’s EV charger that can both energize an EV and use the car’s batteries to feed power back to the electric grid.  This bidirectional, or Vehicle-to-Grid (V2G), capability can help utilities avoid peak power costs by tapping into the lower-priced energy stored by an EV during nighttime or off-peak hours. “The overall goal is to stabilize our rates, become more efficient as a utility and prove new ways to save our members money,” said Curtis Wynn, president and CEO of Roanoke Electric.

Fermata’s FE-15 charger is the first of its kind in the US to receive the certification of UL (formerly Underwriters Laboratories), which reassures end users that the device has undergone rigorous safety testing and engineering. The project with Roanoke Electric has been testing a pair of Nissan Leaf EVs with the charger.

The device can draw up to 111.6 kilowatt-hours in V2G capacity from the two vehicles’ 62-kWh lithium-ion batteries. Already, the system shaved 11 kW off its January peak, saving $105, the company said. Obviously, a hundred dollars is a pittance to an electric power utility, but if two cars can produce that benefit, it is easy to see the advantage of two million cars to a utility. 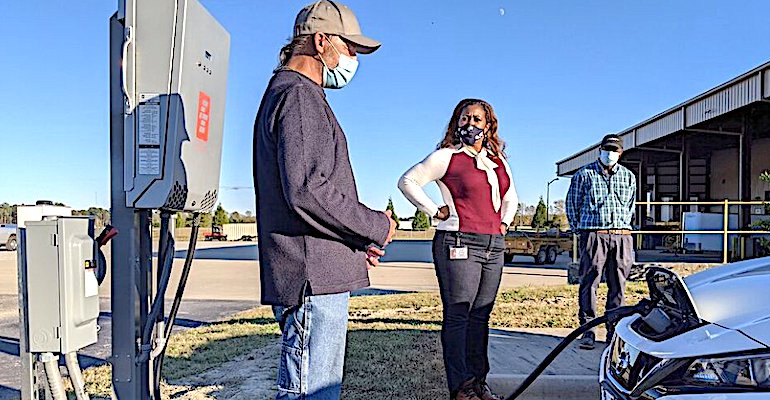 Of course, adding EVs to a power grid draws electricity from the grid most of the time. It is the planned ability to tap those batteries, once charged, that can provide resilience in the face of overwhelming demand.

EVs "are either going to be a very bad thing during a crisis or a very good thing," David Slutzky, CEO of Fermata Energy told Automotive News in an interview.

"If the government and the auto industry continue to pursue electrification of vehicles and we have many, many more EVs on the roads of Texas and everywhere else, and we have an event like happened in Texas, then the vehicles could be a disaster for the grid," said Slutzky. "That's the worst thing that you can do: Add lots of load and then have these events that happen."

Fermata’s goal is to provide chargers that let the power flow in both directions so that the cars aren’t just a load on the grid, but are also a resource. "If instead of just adding load, you add a combination of some load and lots of storage from the parked cars, now you're adding stability, more cost-effectively," he continued.

The more quickly that the V2G chargers can transfer power, the more effective they can be during high-demand situations. Fermata has announced a partnership with Dutch charging station manufacturer Heliox for Fermata to deploy the Heliox 20 kW bidirectional charger in the U.S.

“By offering bidirectional charging, Heliox can support the growing number of vehicles that can return power to the grid, and help consumers and businesses alike meet their clean energy and environmental goals,” said Heliox CEO Michael Colijn.

“Together, we will be able to help our customers accelerate electric vehicle adoption by making it possible for a parked EV to provide power to buildings and the grid,” added Slutzky. “Through our partnership with Heliox, Fermata Energy can make EV adoption much more compelling and cost-effective.”