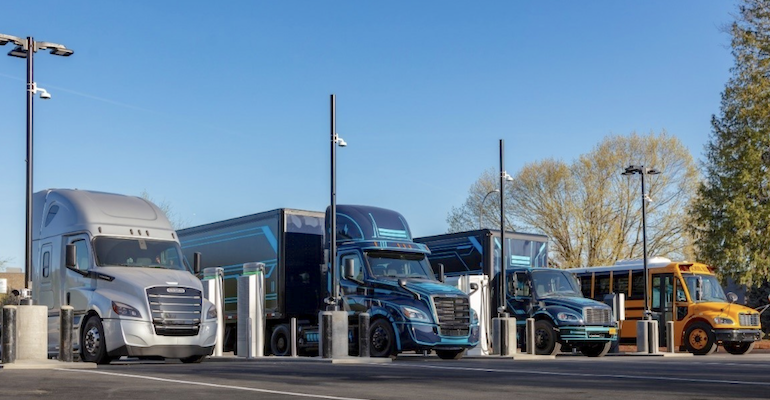 It’s time to start thinking about how megawatt-scale chargers will be used to charge semis, trucks, and buses.

Trucks and heavy-duty commercial vehicles account for more than 20% of US transportation-sector greenhouse gas (GHG) emissions.  With the transportation sector, the largest contributor of CO2 emissions associated with the US economy, electrification of the trucking industry is becoming increasingly important.

A number of companies are developing long-haul Class 8 trucks, like the Tesla Semi, Freightliner’s eCascadia, and other offerings from companies like EV giant BYD and newcomer Nikola Motors are in the wings. Meanwhile, lighter-duty delivery trucks for companies like FedEx, UPS, and Amazon, and the US Post Office as well as city transit buses and school buses have already reached US roadways.

Because of their size, and the loads that they carry, trucks and buses require much larger battery packs than ordinary electric vehicles (EVs). The size of the pack becomes a particularly important and challenging issue when it comes to charging.

An ordinary electric sedan or SUV might have a typical battery capacity of 75 kilowatt-hours (kWh), plenty big enough for a range of 150-200 miles. Some of today’s EVs have DC fast-charging capability of 150 kilowatts (kW) or so—with Teslas at a max of about 250 kW and the Porsche Taycan at 350 kW. As a result, to go from 0% to 80% charge can take as little as half an hour on a 150 kW DC fast charger.

Now, consider a medium-duty truck with a battery pack of 300 kWh (giving a range of over 200 m miles). Charging that large battery with an ordinary 150 kW DC fast charger will take around two hours. Even with a 350-kW charger, the waiting time will be an hour and, in a business, where time is money, it’s not a viable proposition. Meanwhile, the Freightliner eCascadia has a 550-kWh pack (giving a 250-mile range). The company says its charging time to 80% capacity is about an hour and a half on a 350kW charger. Ninety minutes of downtime is still a problem.

The solution is to design bigger chargers for the trucking industry. By charging at 1 megawatt (mW), the eCascadia for example could be ready to go after just 30 minutes. That’s the idea behind Electric Island in Portland, Oregon. Developed by Portland General Electric and Daimler Trucks North America, it’s the first public DC fast-charging station for electric semis, big commercial delivery trucks, school buses, and other heavy-duty electric trucks with the ability to provide megawatt-level charging. Electric Island has eight vehicle charging stations.

The Electric Island site is across the street of Daimler Trucks North America (DTNA, maker of Freightliner). According to a DTNA press release, “Electric Island aims to address the intersection of vehicles and the grid, creating new opportunities for future EV drivers and utility customers. Powered by DTNA’s enrollment in PGE’s (Pacific Gas and Electric) Green Future Impact renewable energy program, the site will be greenhouse gas emissions-free, including all vehicle charging.”

A Matter Of Scale

The scale of megawatt charging provides its own set of challenges. With that much power traveling through the charging cables and into the battery pack, cooling is a concern. Then consider that several trucks need to charge at the same time. Green Car Reports noted that, If there were 10 electric heavy-duty trucks, all charging at 1 mW, the 10-mW required would be about the same energy as used by a semiconductor plant, according to Joe Colett, product manager for emerging technologies at PGE. Green Car quotes Colett, “So that’s kind of the scale that we’re looking at—when something that used to show up on our grid as a few hundred kilowatts, a truck stop, says, ‘Hey we’re gonna be installing two-megawatt chargers,’ now that truck stop looks like a semiconductor plant,” Colett said. “That means that the grid has to grow in different ways that might not be part of the plan yet,” Colett added. “The grid to support that demand might be in industrial parks, not at a fueling station next to the highway.”

Even the charging plug for megawatt capability will need to be different—it's called Megawatt Charging System (MCS) and is overseen by the CharIN organization that also oversees the CCS standard and is still being developed with an emphasis on a 1.2 mW capable connector.

Meanwhile, the Electric Island facility has the potential for up to 5 mW, after some upgrades. John O'Leary, president, and CEO of DTNA said, "Through collaboration with great partners like Portland General Electric, we are helping to shape the future of carbon-neutral freight transportation, starting right here in the City of Portland. Moreover, the manufacture of reliable, durable, and efficient medium- and heavy-duty battery-electric trucks will take place just down the road at our Portland Truck Manufacturing Plant, demonstrating that we truly are crafting an Electric Island."