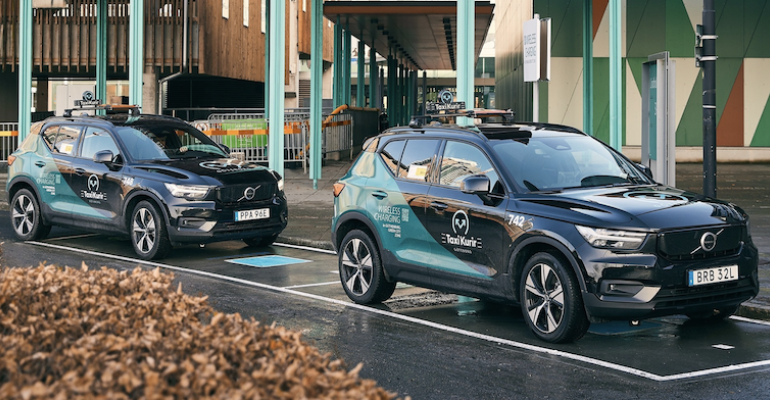 A test and development project is now underway into wireless charging of electric taxis in service in central Gothenburg in Sweden.

One recurring concept that seems appealing is wireless charging for electric vehicles (EVs). The idea that you could sim0ly drive your car onto an electrified pad in your garage or a parking space and recharge your EV battery seems so simple. Yet, as with so many simple ideas, the implementation of wireless charging has had its challenges.

One company that has risen to those challenges is Momentum Dynamics, headquartered in Pennsylvania. Momentum Dynamics has a charging system that has been successfully integrated into passenger vehicles, delivery vehicles, heavy-duty trucks, small passenger buses, and large/heavy-duty buses. Momentum has deployed its system into operational fleets since 2018 and has demonstrated its capability to automatically charged autonomously driven electric vehicles ranging from passenger cars to class 8 trucks.

Momentum Dynamics has been selected by Volvo Cars as its exclusive wireless charging partner as part of a ‘live city environment’ three-year pilot program of EV wireless charging. As part of the Gothenburg Green City Zone, a small fleet of fully electric Volvo XC40 Recharge cars will be used as taxis. The taxis will be driven for more than 12 hours a day and 100,000 km per year, marking the first-ever durability demonstration of fully electric Volvo cars in a commercial use scenario as well as proving the viability of inductive wireless charging.

“Gothenburg Green City Zone lets us try exciting new technologies in a real environment and evaluate them over time for a potential future broader introduction,” said Mats Moberg, head of Research and Development at Volvo Cars in a Momentum news release. “Testing new charging technologies together with selected partners is a good way to evaluate alternative charging options for our future cars.”

Related: When Will Wireless EV Charging Hit it Big?

The City of Gothenburg has adopted the goals of a fossil-free municipal vehicle fleet by 2023 and reducing CO2 emissions by 90 percent throughout the city’s transport system by 2030. Electrification is part of the solution. Business Region Göteborg is leading the transition to an electrified transport system. The large-scale penetration of electric vehicles demands a new kind of collaboration between stakeholders.

“The urban environment is greatly affected by the choice of fuels taxi companies make, as over time they cover very long distances in the city center. The city is also a major purchaser of taxi services and transportation. If the taxi fleet is electrified, we can specify requirements for zero-emission transport services,” said Anne Piegsa, process manager for Electrification at Business Region Göteborg.

How EV Wireless Charging Will Work in Gothenburg
The charging starts automatically when the Volvo XC40 parks over a charging pad that is embedded in the pavement along the taxi rank. The concept is similar to a wireless cell phone charger. Automatic inductive charging works by sending energy through a transmitter placed on the ground, allowing cars to be charged by positioning their receiver plate above it. Volvo Cars will utilize its innovative onboard 360 camera to guide drivers to the charging position.

“Gothenburg Green City Zone has been established for precisely this type of project, real-world practical testing through which we can all learn to accelerate the pace of innovation. Electric taxis can make an enormous difference, both for the climate and to reduce noise in cities,” says Jonas Eriksson, operations manager for Gothenburg Green City Zone at Business Region Göteborg.

How Wireless Power Is Predicted to Reduce Electronic Waste
Feb 08, 2022