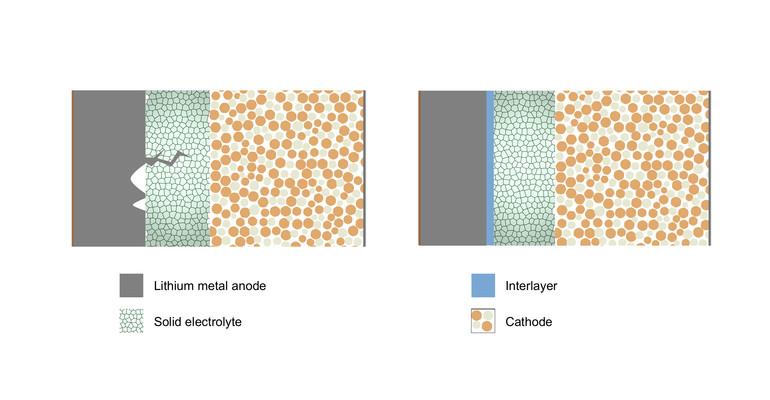 The above schematic (a) represents a lithium-metal solid-state battery with a discontinuous interface. These voids and discontinuities are the main driving factor for the growth of dendrites through solid electrolytes, which can short out the device. These voids can be minimized by using an appropriate interlayer comprised of certain metals.
Adding certain metals to the electrolyte can create more durable devices that last longer and regain their charge more rapidly than current designs.

Researchers have discovered a key reason why solid-state lithium batteries fail, using this knowledge to develop a strategy for longer-lasting devices that can charge faster than current devices, they said.

A team from the Indian Institute of Science (IISc) examined dendrite formation in solid-state batteries, which many view as a viable alternative to the lithium-ion batteries currently used in most of our devices today.

Researchers realized that the appearance of microscopic voids in one of the device’s electrodes early on is a key reason for the formation of dendrites—or thin filaments that poke through the barrier between the electrodes and the electrolyte. Dendrites can cause short circuits and thus failure in batteries, which is why scientists have been working for years to get to the root of the problem.

“This means that now our task to make very good batteries is very simple,” explained Naga Phani Aetukuri, assistant professor in the Solid State and Structural Chemistry Unit (SSCU) of the institute and the leader of the project, in a press statement. “All that we need is to ensure that the voids don’t form.”

Easier said than done. However, the IISc team used their discovery to develop a technique that they said can significantly delay their formation—the addition of a thin layer of metals to the electrolyte surface. This solution also served to extend the life and enable faster charging of the solid-state battery they developed, researchers reported.

Peering Under the Hood

Solid-state batteries switch out the liquid electrolyte in current lithium-ion designs for a solid ceramic electrolyte, and also trade the graphite that’s used in the anode for metallic lithium.

Ceramic electrolytes tend to perform better than ones based on other materials at higher temperatures, which is especially useful in the country where the research was conducted. Lithium is also lighter and stores more charge than graphite, which can significantly cut down the battery cost.

Unfortunately, like their liquid-electrolyte counterparts, solid-state batteries also suffer from the problem of dendrites growing into the solid electrolyte, shorting out the anode and cathode, Aetukuri said.

To investigate why this occurs, Aetukuri’s PhD student Vikalp Raj artificially induced dendrite formation by repeatedly charging hundreds of battery cells, carving out thin sections of the lithium-electrolyte interface, and examining them under a scanning electron microscope.

This is how the team learned that the microscopic voids with currents at their edges the about 10,000 times larger than the average currents across a battery cell were forming in the lithium anode during discharge, researchers said. This was stressing out the solid electrolyte and accelerating dendrite growth, they said.

For this aspect of the project, the team from India collaborated with researchers at Carnegie Mellon University, who conducted computational analysis. This proved to the research team that the refractory metal layer did indeed delay the growth of microscopic lithium voids, researchers said.

The team published a paper on their work in the journal Nature Materials. Researchers said that their work is a key step in one day developing solid-state batteries that can compete commercially with liquid-electrolyte lithium-ion batteries. Moreover, their work also can be extended to other types of batteries that contain metals like sodium, zinc and magnesium, they said.