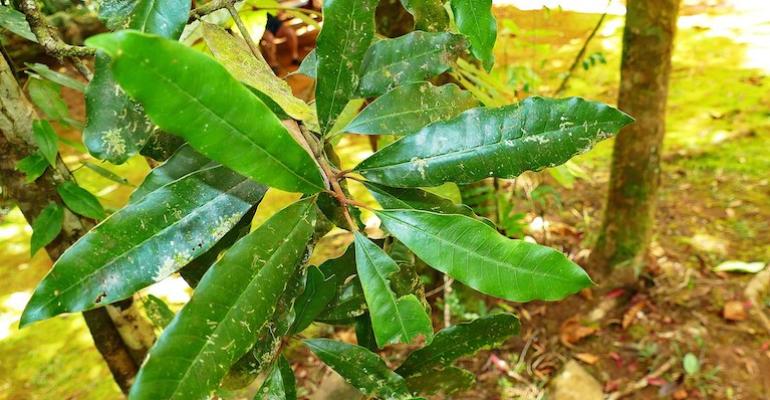 Pycnandra acuminata is a rainforest plant native to New Caledonia that can be used to hyper accumulate metal from the nickel-rich soils found there
Some plants can pull metals from the soil so that they can be processed into the materials that are used in batteries.

Every ton of nickel that is produced creates 18 tons of carbon dioxide (CO2), even more than steel that produces just 2 tons. Nickel is one of the critical materials used in cathodes (positive electrodes) of lithium-ion batteries. As the roll-out of electric vehicles (EVs) continues worldwide, the demand for nickel will continue to grow, to the point that in 2020 Elon Musk asked companies to “please mine more nickel” for Tesla batteries.

The problem is that mining nickel, as with mining most metals from the ground not only produces vast amounts of greenhouse gas (GHG) emissions but also results in significant air and water pollution. Mining is also incredibly energy-intensive—a mine with 1 percent copper-bearing ore for example results in 90 percent material waste to get at the copper metal.

There are other ways of pulling metals from the ground. One of them is called phytomining, also known as agro-mining. Research into agro-mining has been going on around the world for more than 30 years and is based on the observation that some growing plants can store metals such as nickel and that the metals can be released from the plans by harvesting and processing them. Researchers have worked on recovering metals like nickel and zinc, manganese, rare earth elements, and even cobalt using agro-mining methods.

Related: Mining Giant and Tesla Agree on a Nickel Deal: Will Tesla Make its Own Batteries?

Once the plants are harvested, the leaves and stems that make up the biomass are dried and incinerated to create ash that can contain up to 20 percent nickel—significantly higher than any nickel bearing ores.  The nickel can be recovered from the bio ore through a variety of processes. Incinerating the plants does use energy but the overall agro-mining process is observed to use significantly less energy than conventional mining procedures.

Because of the massive and growing amount of nickel that is consumed worldwide, agro-mining will not be able to supply the required amounts of metal. However, hyperaccumulating plants could be cultivated on the lower grade soils surrounding a nickel mine to pull significant amounts of the metal in areas that normally are ignored.

Hyperaccumulators can also be used to decontaminate polluted soils that have massive amounts of lead, zinc or other metals in them. These contaminated soils are unusable for food production but can be used to agro-mine metals while also cleaning polluted sites.

Bloomberg has created a video that explores whether or not agro-mining could become scalable enough to reduce reliance on traditional mining practices. The video is presented here.