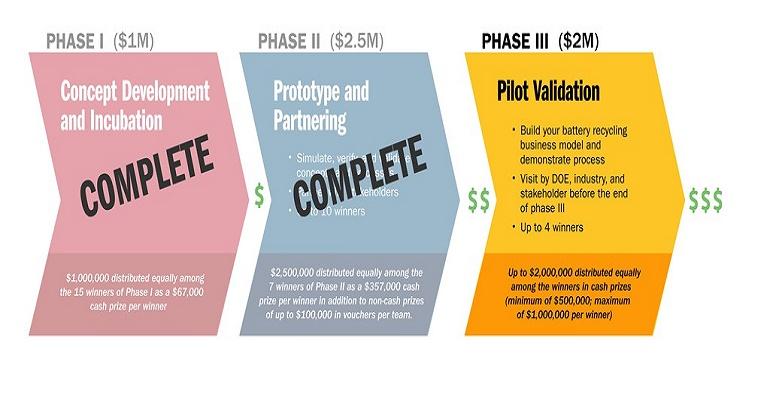 With Phases I and II of the Battery Recycling Prize completed, Phase III will promote pilot production of lithium-ion recycling among seven Phase II winners.
A DOE competition is in its third phase, providing up to $5.5 million to seven teams to demonstrate the feasibility of their lithium-ion battery recycling pilot programs.

One thing electric vehicle (EV) naysayers love to claim is that the lithium-ion batteries that are destined to power our electrified transportation system either can’t be or won’t be recycled. This claim is absurd, as lithium-ion cells are already being recycled in pilot plants created by car companies and their industrial partners around the world. Want more proof? Consider the Lithium-Ion Battery Recycling Prize of the U.S. Department of Energy (DOE) Office of Energy Efficiency and Renewable Energy.

The Prize was announced in January 2019 and recently launched its third and final phase aiming toward DOE’s goal to capture 90% of all spent lithium-ion batteries for eventual recycling of critical materials and reintroduction into the supply chain.

The phased prize competition is designed to help find innovative solutions to collecting, storing, and transporting discarded lithium-ion batteries for eventual recycling. In Phase I, called Concept and Incubation, $1 million was distributed among 15 winners as $67,000 cash prizes per winner. In Phase II, Prototyping and Partnering, $2.5 million in prize money was distributed between the seven winners, each receiving $357,000. In Phase III, called Pilot Validation, the seven winning teams from Phase II will demonstrate their ability to recover lithium-ion batteries and verify the feasibility and scalability of their pilot projects. Teams received up to $100,000 in vouchers to partner with industry experts and DOE’s National Laboratories through the American-Made Challenge Network to support their pilot validation.

“Lithium-ion batteries are becoming more and more prevalent, from cell phones and laptops to increasing numbers of electric vehicles on the road,” said Lauren Lynch, prize administrator in an NREL news release. “It is important to implement effective processes to recover the critical materials and avoid potentially negative impacts, environmental or otherwise.”

The seven Phase II winning teams that will participate in Phase III are:

According to a DOE release, “In Phase III of the Prize, the teams must substantially advance their end-to-end solutions and provide pilot validation of their concepts. Teams will incorporate impact modeling from Phase II to demonstrate the feasibility of their solutions. Progress made in Phase III will demonstrate how effective, efficient, and viable their concepts are when fully scaled.”

Each Phase III participating team can use up to $100,000 in non-cash vouchers to further the development of its project. NREL researchers will join other national laboratories and industry experts, providing support to participating teams to assist in developing, testing, and validating their solutions. These prize vouchers allow teams to access tools, equipment, and expertise to advance their concepts. Up to four final winners of Phase III will be selected and winners will receive a cash prize of up to $2,000,000, distributed equally among the winning teams.

One reason why lithium-ion batteries aren’t recycled at higher rates is the small number of EVs (only around 2% of new vehicle sales) in the market, and how relatively new they are. As the electrification of transportation takes hold in the second part of this decade and EVs begin to age out, the numbers of lithium-ion batteries available for recycling will grow quickly. The object of the DOE Battery Recycling Prize is to be ready and able to meet those recycling needs, making us all the winners, and contrary to what anti-EV forces would have you believe.