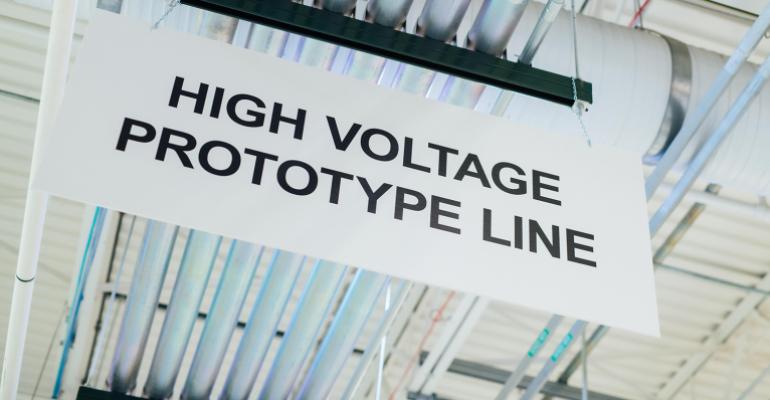 Start Slideshow ›
See how American Battery Solutions is pushing the envelope on battery innovation at its Innovation Center in Lake Orion, MI and high-volume production facility in Springboro, OH.

On September 12th, in conjunction with the North American Battery Show, battery maker American Battery Solutions, Inc. (ABS) opened the doors to its 120,000 sq. ft. Innovation Center in Lake Orion, MI, one of the company’s two major facilities. According to ABS Founder, President, and CEO Subhash Dhar, the Innovation Center is where the company designs and perfects not only its products but also its manufacturing capabilities. The work done here isn’t just R&D however: Though low in volume, its two assembly lines—one each for low-voltage and high-voltage batteries do produce finished products for customers.

The high-volume work is done in a newly upgraded 170,000 sq. ft. manufacturing facility in Springboro, OH. Like the Innovation Center in Lake Orion, the Springboro facility was originally purchased from Robert Bosch Battery Systems, this one in 2019. On April 4th, ABS formally re-launched it with critical added production capacity to meet growing demand for its lithium-ion batteries used in light electric vehicles and numerous industrial and recreational applications.

The Springboro plant includes additional equipment and facility improvements conducted in parallel with developments in new product offerings and new customer programs, steps that enabled production start-up in January this year of the ALLIANCE Intelligent Battery Series. At capacity, the facility will be capable of producing 8 Giga watt-hours of power annually—the equivalent of powering more than 150-thousand electric vehicles.

But much of what enables such a notable production capacity goes back to work at the Lake Orion Innovation Center, with its engineering and testing labs as well as its own manufacturing capabilities.

What follows is a closeup look at activities at both facilities.