Building a Battery Factory Is No Easy Task 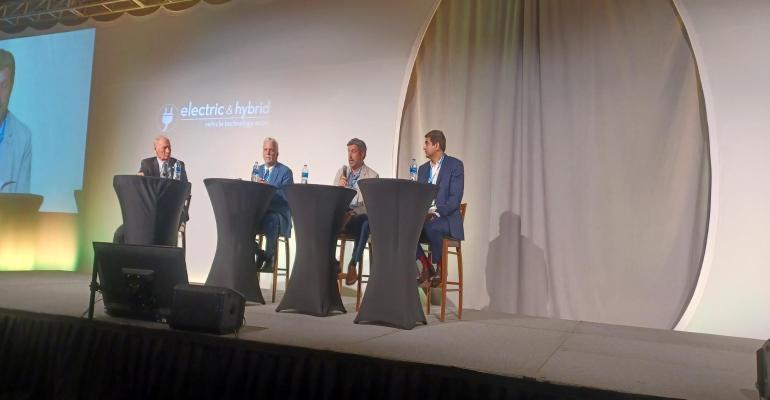 Panelists during at a recent Battery Show roundtable session titled, “Ramping Up Production: Rise of the Gigafactory" discuss issues getting a battery plant up and running.
At the Battery Show, panelists cite challenges including environmental concerns, workforce issues.

But meeting those requirements is much easier said than done,  according to panelists during at a recent Battery Show roundtable session titled, “Ramping Up Production: Rise of the Gigafactory." Despite the passing of the Inflation Reduction Act and the presence of other programs to stimulate more battery manufacturing in the U.S., companies face numerous hurdles getting a plant operating, ranging from site selection to accessing a trained workforce.

Existing infrastructure availability is one challenge. Jay Bellows, President at Kore Power, a U.S.-based battery systems provider, said the availability of electricity, water, land, and roads are among the considerations for companies when choosing a battery plant site.

The move to onshore battery manufacturing is motivated in large part by global supply-chain issues driven by geopolitical instability and logistics issues. But in large country such as the U.S, supply-chain issues such as shipping and logistics occur on state and local levels. Kore Powers’ Bellows said, “You want suppliers as close as possible. The pandemic highlighted this issue.”

Also, given that battery manufacturing sometimes involves ramp-up of new or unproven technologies, proximity to partners is particularly important, noted Asim Hussain, CMO at QuantumScape. Noting the numerous process steps in manufacturing, Hussain said, “The co-location of partners can be a major advantage.”

Panelists said a critical component to plant selection was the availability of a skilled labor force. Given shortages of worker with proper technical skills, labor issues can become a significant hurdle.

Working with local colleges is potentially crucial. “We are partnering with colleges for internships to meet labor needs,” said Kore Powers’ Bellows. “But keeping talent is tough, as workers jump between companies.”

Bellows added that a company with innovative technology can serve as a draw to attract the right talent. “At the core, it helps if you innovate and have experienced engineers that can teach and attract the next generation.”

QuantumScape’s Asim Hussain expressed a similar sentiment. “We are working with engineering departments to hire undergrads earlier in the cycle. We have to compete with companies in consumer electronics such as Google and Apple.”

During a Q&A session, the panelists were asked about the role of financial incentives a state could provide in attracting a company. Kore Power’s Bellows responded that such incentives, while a contributing factor, had to be weighed against the other factors such as location, resource availability, and talent.

The key factor, QuantumScape’s Hussain noted, is the company’s business model. “Your business model has to stand out on its own. Batteries are in such demand that anyone with a good plan can be reasonably assured of being successful.”