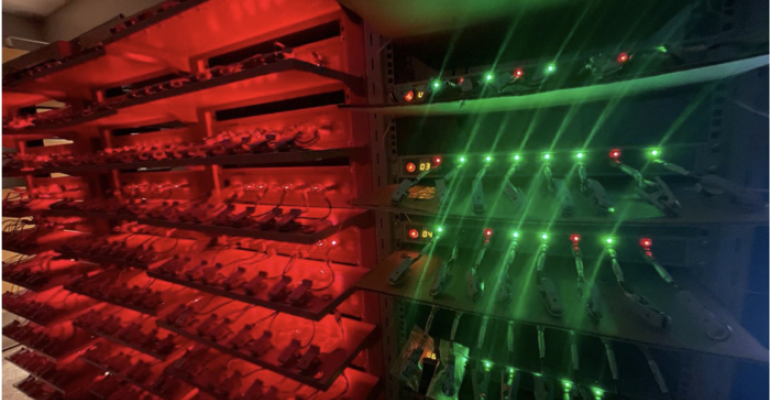 Hundreds of batteries sit on massive racks, blinking red and green, and are tested every day inside Feng Lin's lab. The green and red lights mean the testing channels are working.
New discoveries in the characteristics and interactions of electrode particles present in a cathode can inform the development of longer-lasting energy-storage devices.

By now most people with mobile phones have experienced the gradual decline of battery performance over many charge and recharge cycles. Scientists are trying to solve this degradation in their battery research in numerous ways, one of which is to investigate why batteries lose their ability to recharge over time.

Now a team from the Department of Energy's (DoE’s) SLAC National Accelerator Laboratory at Stanford University—working with scientists from Purdue University, Virginia Tech, and the European Synchrotron Radiation Facility—have discovered a significant aspect of battery decay: that the factors contributing to it change over time.

This discovery can inform the design of batteries in the future that have better long-term performance and can withstand more charging cycles, researchers said.

Specifically, researchers learned through their investigation that early on, decay seems to occur due to the properties of individual electrode particles, which are the fundamental building blocks of the electrode. However, after several dozen charging cycles, it’s how these electrode particles are put together that matters more to battery degradation, researchers found.

"When you zoom out, these particles interact with each other," said SLAC scientist Yijin Liu, a researcher at the lab’s Stanford Synchrotron Radiation Lightsource, in a press statement. Therefore, "if you want to build a better battery, you need to look at how to put the particles together,” he observed.

In their work, researchers built upon previous research that studied how the individual electrode particles break up over time. The latest investigation focused on observing not just individual particles, but also the ways in which they work together to prolong, or degrade, battery life, they said.

One researcher compared the particles to people working in groups in that they start out going their own individual ways, but eventually end up joining together to go in the same direction.

To understand peak efficiency of a device, then, researchers “need to study both the individual behavior of particles, and how those particles behave in groups,” noted Keije Zhao, a Purdue mechanical engineering professor who worked on the research, in a press statement.

To explore that idea, the team used X-ray tomographic technology to study  battery cathodes, reconstructing three-dimensional pictures of the cathodes after they had gone through either 10 or 50 charging cycles. They then cut those 3D pictures into a series of 2D slices and used computer vision methods to identify individual electrode particles.

Researchers identified more than 2,000 individual particles in the cathode. For each of those, they calculated not only individual particle features such as size, shape and surface roughness but also took an overview perspective to document how often particles came into direct contact with each other and how varied the particles' shapes were, they said.

Once researchers identified particle characteristics and behavior, researchers studied how each of these specific traits or actions contributed to particles’ breakdown. What they found was a pattern that gave them clues into how battery degradation occurs, they said.

After 10 charging cycles, researchers found that individual particle properties--such as how spherical the particles were and the ratio of particle volume to surface area--were the most integral to degradation of the overall device.

After 50 cycles, however, the most impactful factors to particle breakdown changed, with pair and group attributes--such as how far apart two particles were or how varied their shapes were—becoming the defining factors, researchers said.

"It's no longer just the particle itself,” but  “particle-particle interactions" that matter, SLAC’s Liu said in a press statement.

Researchers published a paper on their work in the journal Science.

The team’s ultimate finding on how electrode particles affect battery decay can inform how manufacturers develop techniques to control these properties in future devices, researchers said. One way this can be done is to use magnetic or electric fields to align elongated particles with each other, which potentially could result in longer battery life if the study results are any indication, they said.

"This study really sheds light on how we can design and manufacture battery electrodes to obtain long cycle life for batteries," Virginia Tech chemist Feng Lin said in a press statement.