The Future of Batteries—in 3D 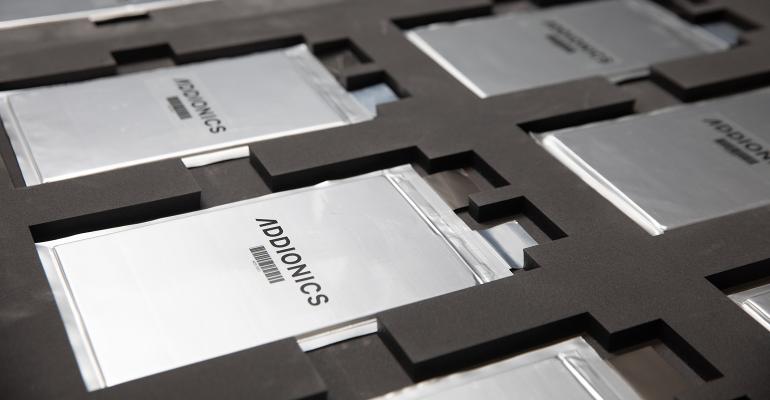 Tel Aviv-based Addionics is working with partners on a host of next-generation batteries made with 3D electrodes, thanks to its proprietary technology that moves away from traditional 2D electrodes.
Startup Addionics aims to change how energy-storage devices are designed, with a chemistry-agnostic electrode that can deliver more powerful, lower-cost batteries.

A startup has developed promising new electric vehicle (EV) battery technology by taking a three-dimensional (3D) approach to creating electrodes for any type of battery chemistry.

Tel Aviv-based Addionics currently is working on a host of next-generation projects targeting a range of automotive applications that aim to create a range of different batteries, including emerging technologies such as lithium-ion phosphate (LFP), silicon, and solid-state.

The company's approach to advancing EV battery technology resides in the electrode, with a strategy that is distinctly different than the current 2D structure for these critical components of batteries, the company said.

Though automakers and battery suppliers both are aware of the performance and cost-optimization benefits of 3D metal electrode structures, so far, it's been difficult to to scale this type of technology up economically for the mass market, noted Addionics’ CEO, Moshiel Biton, in an email interview with Battery Technology.

His company aims to change that with a patented and scalable electrode fabrication process that significantly lowers manufacturing costs, paving the way for mass market adoption of 3D electrodes for the first time with, he said.

"With … our proprietary AI software that can predict and determine the best structure for a given application, suppliers can significantly bring down costs while achieving market-leading battery performance," Biton said.

Batteries optimized using Addionics' smart 3D electrodes cost about the same at medium production scale as current electrode technology while delivering performance improvements. However, at the giga scale, they can reduce cost by 10 percent at giga scale, he said.

Traditional lithium-ion batteries that are used widely in the EV market—as well as  power mobile devices and other commonly used electronics--have electrodes with a 2D structure, a technology that's been in place for some 30 years.

While 2D electrodes have served batteries well so far, they are reaching limits of their implementation as the power requirements of energy-storage devices increase, and manufacturers need to maximize cost for mass production—as is the case with EV batteries, Briton said.

One limitation is an energy density/power tradeoff that occurs with both thin and thick 2D electrodes—the former boast high power but low energy, and are 50 percent more expensive, while the latter offer high energy but also the disadvantages of lower power and a shorter lifetime.

"The 3D structure yields high energy and high power performance in both the anode and cathode for every battery chemistry," he said.

3D electrodes also have another key advantage—they are chemistry agnostic, which Addionics managed to achieve by taking an approach that focuses on physics rather than on improving the battery chemistry, which is what most scientists and companies trying to solve the problem focus on, Briton said.

"It is critical to develop solutions that emphasize altering the physical structure of batteries," he said. "This allows us to improve any kind of battery in the industry, which means not only Li-ion batteries but also emerging chemistries like silicon and solid state."

Indeed, rather than try to improve the battery's chemistry, Addionics aims to optimize the architecture of the electrodes and to improve the cell design, he said.

"When the electrode design is optimized with higher surface area, you can use the real estate more efficiently," Briton told Battery Technology.

He compared Addionics' approach with a similar phenomenon that occurred in the semiconductor industry. "We want to do this with batteries -- creating more real estate by smarter design," Biton told Battery Technology. "It means that not only that we use the structure wisely, but that you can also integrate more active materials."

Addionics currently is working with automotive manufacturers to promote its 3D electrodes by developing various batteries with different chemistries for EVs and other applications.

Specifically, their current partnerships include developing a lithium-nickel-manganese-cobalt-oxide (NMC) battery for EVs in partnership with three leading automotive OEMs; an LFP battery for two- and three-wheeler vehicles with a publicly traded, multinational conglomerate; a silicon battery solution with an American tier 1 supplier; and a next-generation solid state technology with Saint Gobain, the French multinational material company, Briton told us.

Addionics currently is focused on the EV and e-mobility space with its technology, "as this is the largest target market and the one with the highest urgency for innovation," he said. However, the company's technology can be applied to batteries in other industries as well, including: consumer electronics, stationary energy storage, aviation and defense, and medical devices, he said.

"This will help meet growing demand for higher performing, cheaper, and safer batteries," he said.