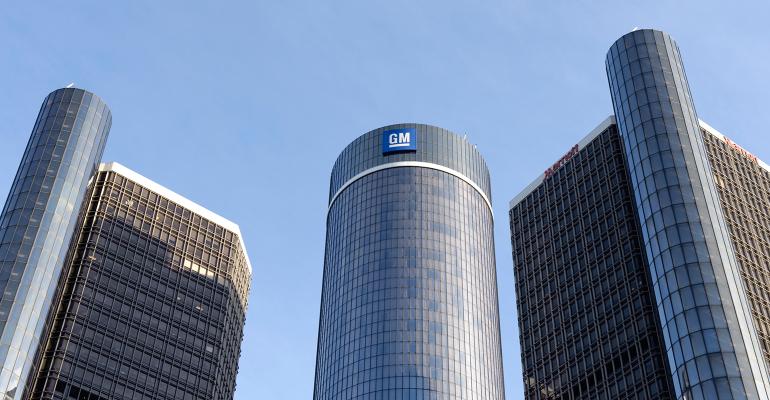 General Motors headquarters in Detroit's Renaissance Center. GM has a longstanding goal of reaching a million units of EV capacity in North America by the end of 2025.
Companies aim to leverage OneD’s proprietary technology to increase energy density in EV batteries.

Now, General Motors (GM) is joining the trend, as it recently announced a partnership with OneD Battery Sciences for joint R&D efforts into silicon anode battery technology. Specifically, the groups will be working to leverage OneD’s SINANODE technology for the future of GM’s EV batteries.

In this article, we’ll discuss the pros and cons of silicon anodes, OneD’s unique technology, and GM’s collaboration with OneD.

Pros and Cons of Silicon Anodes

One of the major advantages of silicon as an anode material is that silicon offers significantly improved energy capacity as compared to graphite. Specifically, while graphite offers a maximum theoretical specific capacity of ~370 mAh/g, silicon boasts a specific capacity of 4,200 mAh/g as well as a volume capacity of 9,786 mAh/cm^3. Hence, batteries based on silicon anodes should theoretically lead to large improvements in energy capacity as compared to conventional solutions.

One challenge with silicon anodes, however, is reliability and safety. Silicon anode batteries tend to undergo huge volumetric fluctuations during charging and discharging, swelling and contracting by up to 300% per cycle. This leads to increased risk of failure and safety risks such as combustion and puncturing. To this point, these challenges have been the greatest hindrance to silicon anode technology.

To address some of the major concerns of silicon anode batteries, while maintaining the benefits, OneD Battery Sciences has developed their proprietary SINANODE technology.

Uniquely, the central technological concept behind the SINANODE platform is its use of silicon nanowire-infused graphite. Specifically, SINANODE technology works by infusing silicon nanowires into conventional graphite anodes through the use of chemical vapor deposition (CVD) machinery. In this technique, the silicon nanowires, which are essentially nanoscale electrical wires made from silicon, are infused into the graphite surface and pores in such great quantity that their presence effectively triples the specific capacity of the graphite. Additionally, the silicon nanowires remain pliant and do not crack during charging and discharging, allowing for SINANODE to sidestep the reliability concerns of conventional silicon anodes.

According to OneD, SINANODE delivers a specific capacity of 3,250 mAh/g, a number which they claim marks the highest of any silicon solution. Beyond improved capacity, OneD also claims SINANODE includes a fully developed manufacturing process and scale-up plan to match the manufacturability of traditional lithium-ion batteries.

Through this collaboration, General Motors hopes that the introduction and commercial production of SINANODE technology into their offerings will lead to higher energy density batteries. With this, the goal is to unlock electric vehicles with a significantly improved range from the current state of the art, and ultimately to drive widespread adoption of electric vehicles.