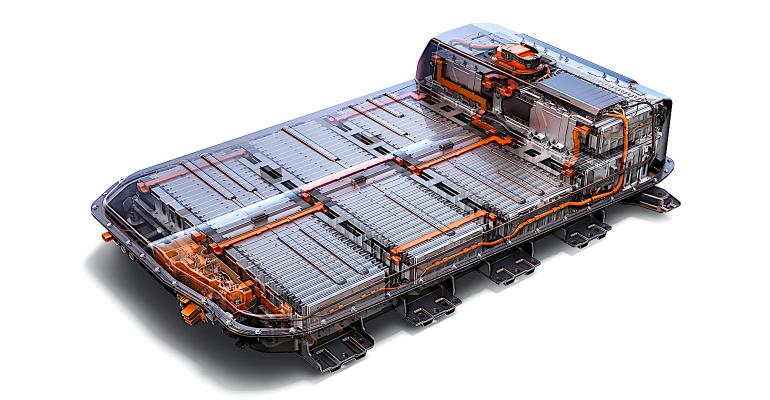 The 60 kWh lithium-ion battery pack in the Chevrolet Bolt uses liquid cooling to keep the battery operating at its optimum temperature.
How battery characteristics and EV performance change with temperature changes.

Much like humans, most batteries operate best over a narrow temperature range. If they get too hot, they overheat and begin to shut down, or worse go into melt-down. If they are too cold, their motions become slowed and eventually halt, with often dire results. The two most commercially important battery types are lead-acid batteries, and lithium-ion batteries, and each has its own thermal considerations.

Lead-acid batteries contain lead grids, or plates, surrounded by an electrolyte of sulfuric acid. A 12-volt lead-acid battery consists of six cells in series within a single case. Lead-acid batteries that power a vehicle starter live under the hood and need to be capable of starting the vehicle from temperatures as low as -40°. They also need to withstand under hood temperatures that can soar above 150°F. Low temperatures reduce the output of a lead-acid battery, but real damage is done with increasing temperature. For example, a lead-acid battery that is expected to last for 10 years at 77°F, will only last 5 years if it is operated at 92°F, and just a year and a half if kept in a desert climate at a temperature of 106°F. Starter batteries in cars in colder northern climates last an average of 59 months, while in the south they tend to last just 47 months. On the good side, lead-acid batteries are relatively inexpensive, readily available, and easy to replace, so their sensitivity to environmental temperature extremes is something consumers are likely to accept and consider a part of routine vehicle maintenance.

Now let’s consider lithium-ion batteries. Over the past 20 years, they have come to power everything from laptops and portable electronic devices to electric vehicles (EVs). The components of a lithium-ion cell include a cathode, and anode, a separator, and an electrolyte that allows the travel of lithium ions back and forth between the cathode and anode. Lithium-ion batteries come in a variety of different configurations, including pouch cells, cylindrical cells, and prismatic cells. An EV can have as many 3,000 cells wired in series and parallel and arranged into modules that are then configured into a battery pack. They are expected to last the life of the car and are not generally considered a replacement or maintenance item.

The thermal concerns for lithium-ion batteries include temperature rise and non-uniformity over the large number of cells during charging and discharging, and potential for failure during extreme ambient conditions in both hot and cold weather. Because the auto industry norm is to warranty the battery pack for 8 years or 100,000 miles, premature failure due to temperature effects is a real concern.

Unlike a car starter battery that provides a burst of electrical energy to turn over the engine until it starts, and then is slowly recharged by the vehicle alternator, an EV battery must provide large amounts of electrical energy to the traction motor or motors to move the vehicle. Moving this large amount of energy creates lots of heat, both from electrochemical reactions inside the cell, and the internal electrical resistance both inside the cells and from the connectors between cells and modules within the pack.
Although EVs can demonstrate quick acceleration and high-performance levels on the track, they can typically only do so for a short time before heat buildup requires a reduction in power output and a reduction in performance.

At high discharge and charging rates, the battery temperature rises dramatically. In the worst cases, it can reach a point where an unstoppable chain reaction occurs called thermal runaway, during which time the energy stored in the cell is released nearly instantaneously. If the cells are in close proximity, thermal runaway in one cell can quickly trigger the same effect in adjacent cells. It is therefore important to maintain lithium-ion cells in a specified temperature range and this is the job of the battery thermal management system (BTMS).

In general, temperature sensors and computer software that is used to limit current output of individual cells to control pack temperature. Beyond this, there are two types of BTMS used in today’s EVs: air-cooling and liquid cooling.

The biggest advantages provided by an air-based cooling system are its simplicity, low weight, and relatively low cost. Air cooling of the battery pack can be found on Nissan Leaf electric vehicles. The gaps between battery modules and the airflow rate are two important considerations with air cooling an EV pack. Early Nissan Leaf models (2010-2012) were found to have degradation of their packs when operated in extremely hot climates (such as Phoenix, AZ). A slight change in the cell chemistry was undertaken and the degradation was lessened, but the issue demonstrated some of the concerns that can occur with air cooling in regions with high ambient daytime temperatures. Uniformity of the temperatures between cells can also be more difficult with air cooling.

Liquid cooling of a lithium-ion pack is considered to provide better temperature management, especially under high discharge and charge conditions. EVs that use liquid cooling include Tesla models and the Chevrolet Volt and Bolt models. The heat transfer coefficient of water/liquid is much higher than air, allowing the cooling system to more effectively remove waste heat. In general, with liquid cooling the cells can be placed closer together in the modules, making the pack more compact and energy-dense. The downsides are the weight of the coolant in the system, the complexity of a pumping and heat exchange system, and the parasitic load of powering pumps that reduces the energy available from the battery to provide greater range.

Liquid cooling also provides advantages by maintaining a more constant temperature in high and low ambient environments. Operating lithium-ion cells at low temperatures has been found to deteriorate performance, primarily due to the formation of a solid electrolyte interface (SEI) that can reduce the flow of lithium ions. In addition, at low ambient temperatures, the battery's internal resistance increases, leading to higher heat generation. By pre-heating the liquid coolant in the system, the battery pack can operate more safely at low temperatures. Liquid cooling systems can also be used to store waste heat generated during operation and use it to preheat the battery pack when used in cold climates.