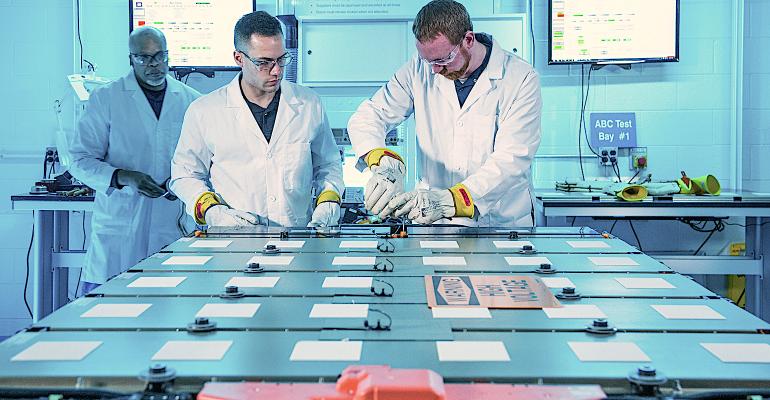 General Motors (GM) announced its next-generation Ultium battery pack will feature on the new Hummer EV in 2022, and Cadillac’s Lyriq, expected in 2023. We would like to drill down on one aspect of the new pack design we find particularly interesting: its all-new wireless battery management system (wBMS).

A battery management system (BMS) has sensors embedded within a battery pack to monitor the condition and health of battery cells and groups of cells. Lithium-ion batteries are particularly touchy when it comes to charging-discharging and the voltage in individual cells must be finely balanced for the pack to produce its optimum levels of power. In general, the sensors at the cell level communicate with a BMS controller through a complexity of dozens of thin wires that snake through the pack, joining into a cable that attaches to the BMS through a large, multiwire connector.

Now, GM has worked with Analog Devices, Inc. (ADI) to develop a wireless system (wBMS) to eliminate the bundle of wires that connect to BMS to individual cells. According to an ADI press release, “The implementation of ADI’s wBMS eliminates the traditional wired harness, saving up to 90% of the wiring and up to 15% of the volume in the battery pack, as well as improving design flexibility and manufacturability, without compromising range and accuracy over the life of the battery.” Reducing the volume of the wiring in the pack also results in a higher energy density, helping to create a lighter vehicle.

“Scalability and complexity reduction are a theme with our Ultium batteries – the wireless battery management system is the critical enabler of this amazing flexibility,” said Kent Helfrich, GM executive director of Global Electrification and Battery Systems in a GM news release. “The wireless system represents the epitome of Ultium’s configurability and should help GM build profitable EVs at scale.”

The wBMS uses radio chips inserted into each battery module and transmits data wirelessly in the 2.4 GHz frequency band. The system developed for GM by ADI includes all integrated circuits, hardware and software for power, battery management, RF communication, and system functions in a system-level product that supports the BMS function. Additional features allow batteries to measure and report their own performance, allowing early failure detection, and providing for optimized battery pack assembly. The data can be monitored remotely throughout the battery lifecycle—from initial manufacture and assembly to shipping and storage in a warehouse through installation and vehicle life and even into a second-life phase.

According to GM’s release, “The wBMS will help GM’s electric vehicles balance chemistry within the individual battery cell groups for optimal performance. It can also conduct real-time battery pack health checks and refocus the network of modules and sensors as needed—this helps safeguard battery health over the vehicle’s lifespan.” This has some interesting implications. If during the life of a vehicle, a battery module needs replacing, the wBMS should be capable of allowing the pack to adapt to slight differences that a newer, updated replacement module might exhibit.

In addition, battery reuse in secondary applications might be easier with wBMS than with conventional wired monitoring systems. “When the wireless packs are capacity-reduced to the point where they are no longer ideal for optimum vehicle performance, but still functional as consistent power supplies, they can be combined with other wireless battery packs to form clean power generators. This can be done without a redesign or overhaul of the battery management system traditionally required in second-life usage,” according to GM. 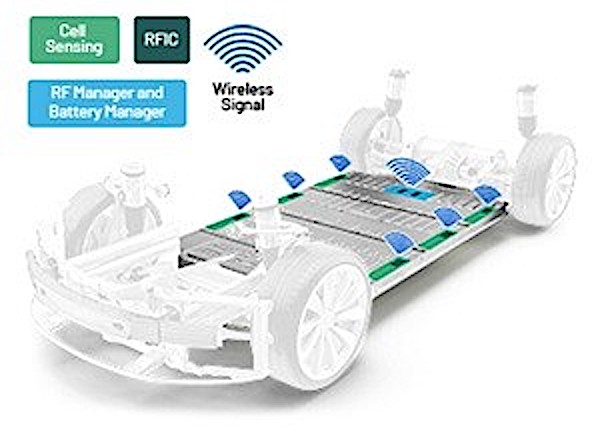 ​The wireless battery management system is protected by cybersecurity measures that are foundational to GM’s all-new electrical architecture or Vehicle Intelligence Platform. “The DNA of this system includes protective features within the hardware and software layers, including protection of wireless communications,” according to the company.

“We are pleased to collaborate with ADI to take the wBMS technology to production as part of our ground-breaking Ultium battery platform,” said GM’s Helfrich. “ADI’s wBMS technology enables the more widespread electrification of our fleet, and we look forward to a continued collaboration with ADI to deliver innovation in safety, quality, and performance for the future.”

With wBMS, automotive engineers won’t have to develop specific components for every individual electric vehicle and create new BMS wiring harnesses for each model. The wireless battery monitoring system will be standard on all planned GM vehicles powered by Ultium batteries.