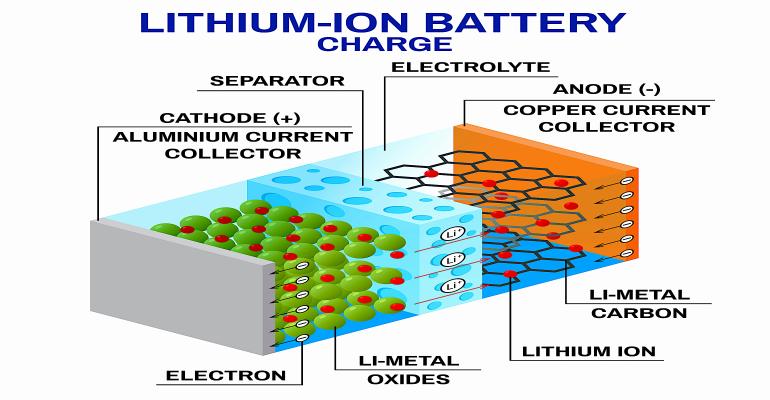 It may be possible to eliminate the anode (shown far right) in lithium-ion batteries.
Battery researchers are working on ways to eliminate the carbon-graphite anode from their latest designs—potentially improving performance while reducing cost with anode-free batteries.

Today’s commercial lithium-ion batteries are all similar. They contain a carbon graphite negative electrode (anode) that collects and stores lithium ions during charging through a process called intercalation. They contain a positive electrode (cathode) that is made up of either a lithium-iron-phosphorous (LFP) compound or in higher power applications, a nickel-based oxide that is combined with cobalt and either aluminum (NCA) or manganese (NCM), that collects lithium ions during discharge. Between the cathode and the anode is a liquid electrolyte made up of flammable organic solvents that facilitate the movement of the lithium ions between the electrodes. A plastic separator also resides in the electrolyte that prevents the unwanted flow of electrons through the battery itself.

Lithium-ion batteries have become hugely popular for applications as diverse as cell phones and portable electronics, to electric vehicles (EV), to electric power grid support. Although similar in design they are available in a wide range of configurations, including coin-sized miniature cells, cylindrical cells in various sizes, pouches, and prismatic cells in a variety of geometric shapes. Because the chemistry doesn’t change dramatically, however, the performance of available commercial cells is actually quite similar.

That doesn’t mean there isn’t an intense worldwide effort to improve the performance of batteries. Aside from materials research that has the goal of replacing expensive cobalt or improving safety by replacing the flammable electrolytes, the three major goals of battery research have been to reduce cost, improve performance (including both energy and power densities), and build safer batteries.

One way to improve power and energy densities is to replace the carbon-graphite anode with a strip of metallic lithium. Then, instead of counting on a trickle of lithium ions from the anode during discharge, there is almost a fire hose of lithium that can flow through the electrolyte to the cathode. The problem is when it comes time to recharge the lithium metal battery. Instead of carefully inserting the lithium ions back into the graphite structure, the returning lithium plates onto the metallic anode surface, often in haphazard patterns. This can result in the formation of spikey, needle-like crystals of lithium called dendrites, which can grow large enough to short out with the cathode, potentially causing a fire.

The formation of dendrites can be suppressed by the use of a solid electrolyte, made from a polymer or ceramic material. This solution brings its own problems including limited cycle life, cost, and manufacturability, but is looking promising. A company called QuantumScape is working to develop a solid-state ceramic electrolyte that is just a few tens of micrometers thick and that also serves as the separator. The solid ceramic suppresses the formation of dendrites while still allowing lithium ions to pass easily back and forth.

In some ways, a more interesting aspect of the QuantumScape battery is its “anode free” design. Instead of using a graphite anode that stores lithium ions during charging, or a strip of lithium metal to provide lithium ions during discharging, the anode fee design uses a simple electrical contact in place of the anode. The cathode contains a large number of lithium ions so that when the battery is charged, the lithium ions travel through the separator and form a flat, dendrite-free layer between the separator and the electrical contact. Because nearly all the deposited lithium then returns to the cathode during the discharge cycle, the need for additional anode material is eliminated, reducing the weight and cost of the battery.

Others are working on anode-free battery designs. Jeffery Dahn’s research team at Dalhousie University, Tesla Canada’s R&D group, has applied for patents for anode-free lithium-metal pouch cells with a dual-salt LiDFOB/LiBF4 liquid electrolyte. In Nature, the team reported that their experimental cells have 80% capacity remaining after 90 charge-discharge cycles, reported to be the longest life demonstrated to date for cells with zero excess lithium. They also report that the liquid electrolyte allows a smooth dendrite-free lithium surface even after 50 charge-discharge cycles.

There is also interest in working with materials other than lithium in anode-free designs. As described in the American Chemical Society’s (ACS) Nano Letters, research at King Abdullah University of Science and Technology has focussed on a manganese dioxide cathode that is pre-intercalated with zinc ions, an aqueous zinc trifluoromethanesulfonate electrolyte solution, and a copper foil current collector. When charging, zinc metal travels from the zinc-rich cathode, through the electrolyte, and gets plated onto the copper foil. During discharge, the zinc metal is stripped off the foil and in the process releases electrons that power the battery.

To prevent zinc dendrites from forming on the copper foil, the researchers coated the copper current collector with a layer of carbon nanodiscs. The nanodisc layer promotes uniform zinc plating, preventing dendritic growth, and increasing the efficiency of the battery. The battery showed high energy density and retained a reported 62.8% of its storage capacity after 80 charging and discharging cycles. This does not seem adequate for commercialization, but the research into anode-free battery designs is just beginning.