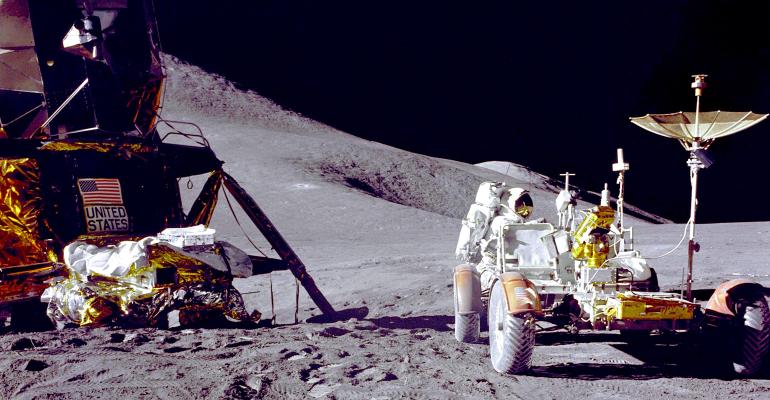 Apollo 15 lunar module pilot Jim Irwin loaded the lunar rover with tools and equipment in preparation for the first lunar spacewalk at the Hadley-Apennine landing site. The Lunar Module 'Falcon' appears on the left in this image. The undeployed Laser Ranging Retro-Reflector lies atop Falcon's Modular Equipment Stowage Assembly.
General Motors is partnering with Lockheed Martin to build the first of the next generation of lunar rovers.

As NASA’s Artemis program prepares for the return to the moon, the space agency has named partners General Motors and Lockheed Martin to provide the first of an expected variety of lunar rovers to support astronauts on the upcoming missions.

This first rover is called the Lunar Terrain Vehicle (LTV), and while no technical specifications are yet available, the contractors do say that it will have a much longer driving range than that of the Apollo-era lunar rovers. The original moon buggies could drive less than five miles from their landing site, but the LTV will need to let astronauts travel much farther. 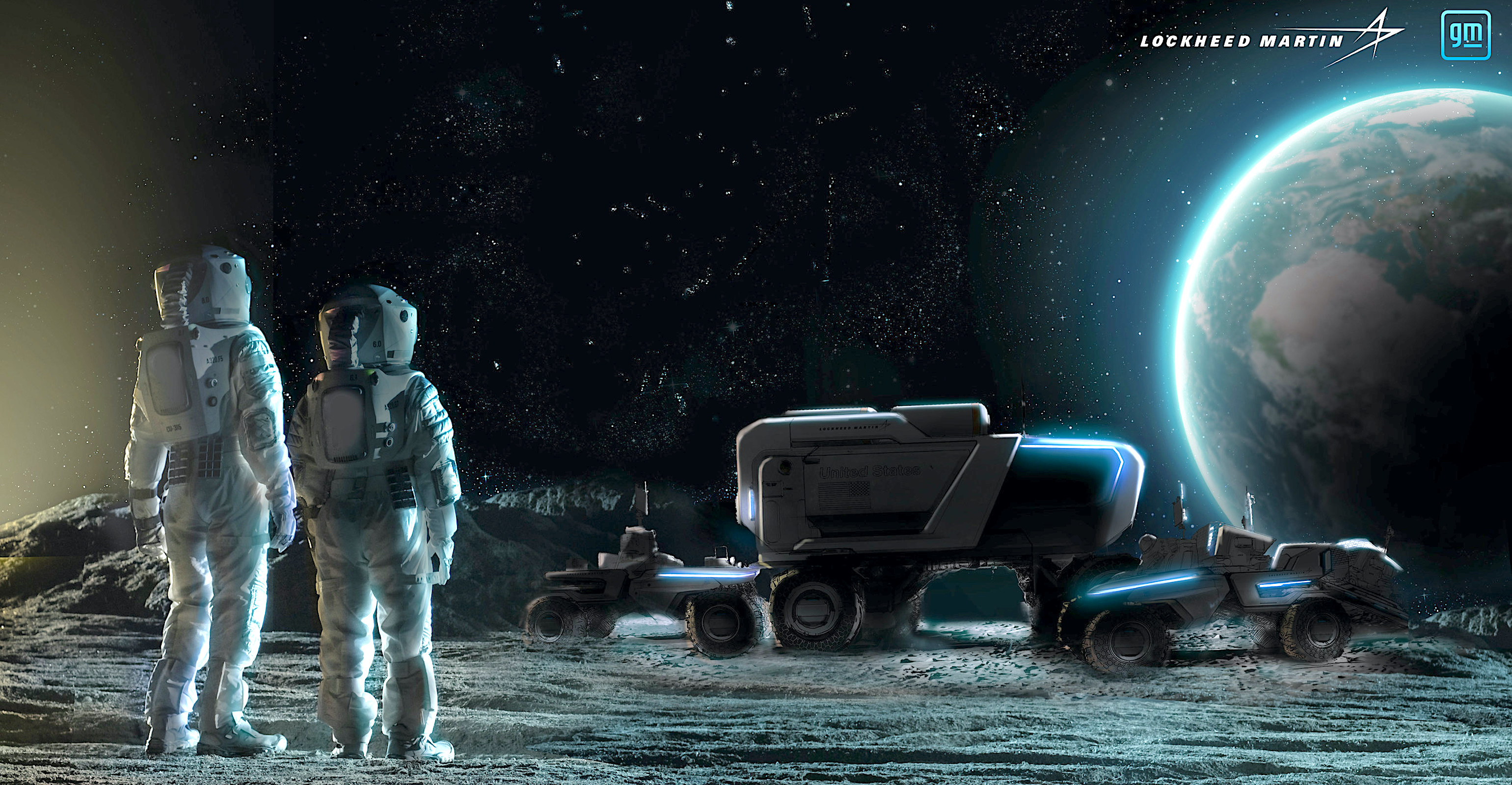 An artists' conception of a lunar roving vehicle on the moon's surface.

GM has previous experience from its contributions on the original Lunar Roving Vehicle (LRV), which included the chassis and metal-mesh wheels for the vehicles that flew on the Apollo 15-17 missions. During the Apollo 15 mission, the LRV drove 17.5 miles in total.

Lockheed Martin has more than 50 years of history working with NASA on deep-space human and robotic spacecraft, including NASA's Orion capsule for Artemis and potential future Mars missions, so it will lead the LTV team. The company has built spacecraft and systems that have gone to every planet and has been on every NASA mission to Mars including building 11 of the agency's Mars spacecraft.

GM is developing leading-edge batteries and electric drive systems for its earth-bound vehicles, and that technology will be helpful for the moon rover too. GM's work on autonomous technology will also be important because the LTV is slated to perform some of its work without a driver.

This will be needed so the rovers, which will be transported to the lunar surface separately from the astronauts, will be able to position themselves in preparation for their drivers’ arrival. The LTV will also be able to provide commercial payload services, delivering those payloads to their sites on the moon, and extend the range and utility of NASA’s scientific payloads and experiments. Astronauts in NASA’s Human Landing System or in lunar orbit aboard the lunar Gateway will be able to use the LTV to conduct science operations without a driver. 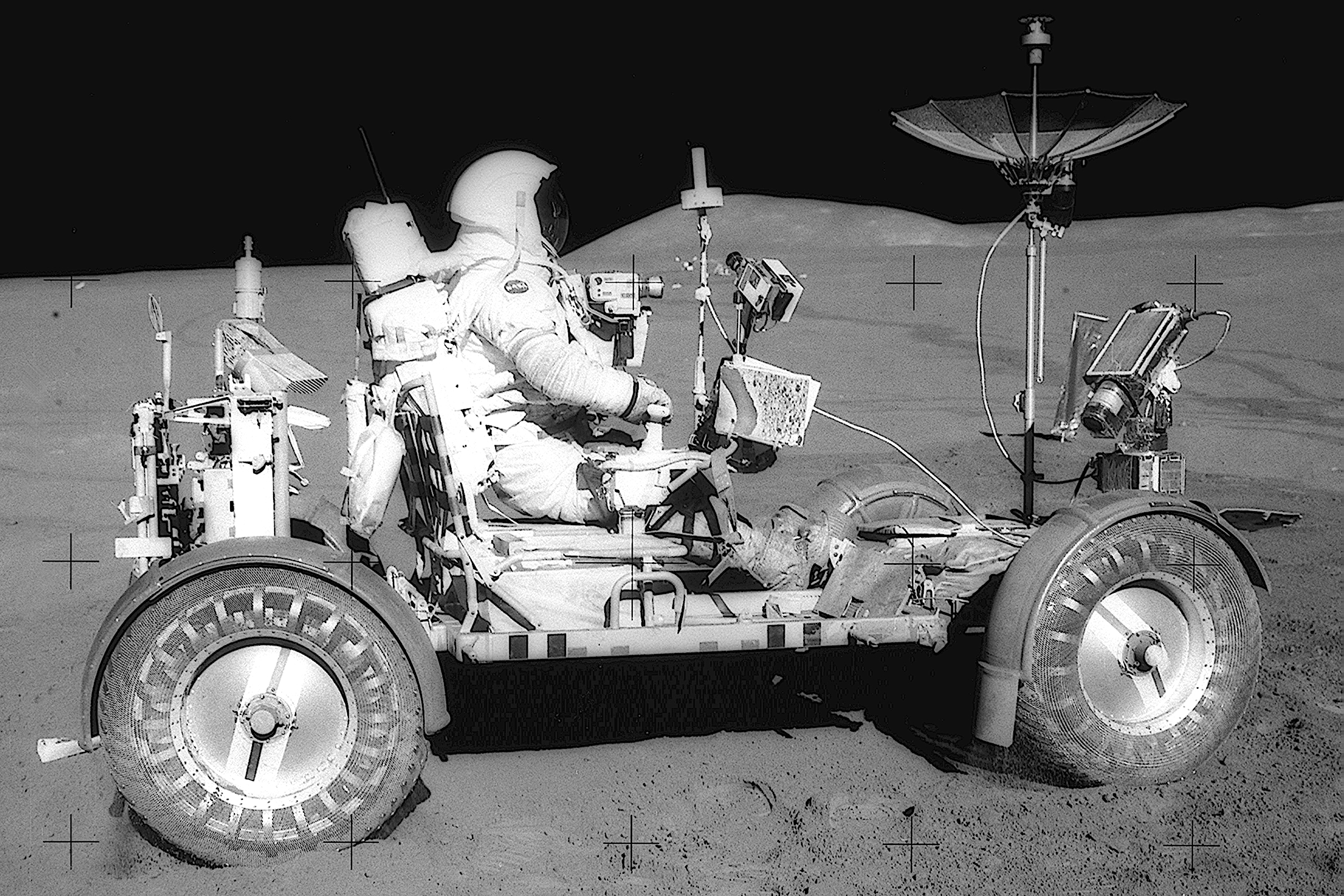 This photograph, taken during the Apollo 15 mission on the lunar surface, shows Astronaut David R. Scott in the Lunar Roving Vehicle (LRV) for the return trip to the Lunar Module, Falcon, with rocks and soil collected near the Hadley-Apernine landing site.

The LTV will need to be hardened against harsh lunar weather, as a lunar day takes a month, leaving the vehicle in the day for two continuous weeks and then in the dark for two more weeks. During those times, temperatures will swing from overnight lows of -280 degrees Fahrenheit to day-time highs of 260 Fahrenheit.

“The biggest difference is, when you design for the Moon and for space applications, the force of gravity is different and has to be taken into account,” said Madhu Raghavan, Global Research & Development Group Manager at GM. “There are extreme temperature swings, and the radiation in space becomes a challenge in terms of systems design. You’re also operating in a vacuum and designing your systems to withstand the shock of the actual launch.”

Here is where Lockheed Martin’s experience will help GM’s design effort. “We’ve led missions to other planetary bodies for decades, building spacecraft that can survive the high radiation environment, cold temperatures, and yet be very light and very reliable,” said Kirk Shireman, vice president, Lunar Exploration Campaigns at Lockheed Martin. “This is what we specialize in, and we are more than capable of meeting and exceeding this challenge for NASA.”

Digital tools will be key to providing the necessary durability in a vehicle that is designed as affordably as possible. “Our goal is to build a vehicle that is affordable, that exceeds our customer requirements, and to do it rapidly,” Shireman said. “Digital tools are how we achieve that. We’ve demonstrated already across programs and proposals the speed, affordability and reliability that digital tools enable, and we fully expect to leverage and expand on that experience with this program.”

Heat and cold are challenges for EVs on earth too, so progress dealing with these problems on the LTV project could produce benefits for GM’s EV buyers in the future. “Because the operating conditions are so extreme in space, our work on this project will help us make safer and better batteries back on Earth,” Raghavan said. “The Moon and Mars are, of course, totally unstructured, unlined roads. Designing for that environment will ultimately just make our EV capabilities on Earth that much stronger.”

To project could also help GM attract top-quality engineering talent. Raghavan says that he’s seen a major influx of job applicants for open positions on his project team. “This is the stuff you dream about as a kid in science class,” he said. “People want to be part of this.”