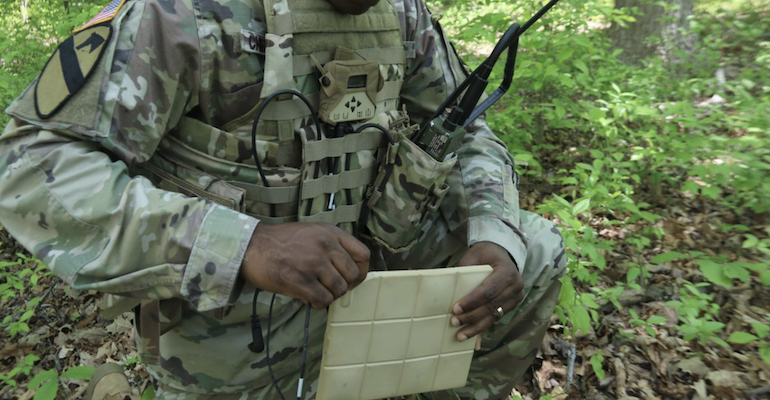 As we celebrate Memorial Day, let’s think about how better batteries will make life easier for soldiers in the field.

They used to say that an army traveled on its stomach.  Well, today’s soldier carries an average of 20.8 pounds of batteries for a 72-hour mission—suggesting carrying electrons has become an important part of warfighting. The batteries power everything from communications and navigation equipment to night-vision goggles. Lithium-ion batteries are the heroes, capable of high energy and power densities in small packages. With even more electronic equipment coming, however, it means that better batteries will be a necessity.

Engineers and scientists at the Combat Capabilities Development Command, or CCDC, are exploring improvements in lithium-ion cells through the use of silicon anode technologies. "This chemistry translates to double the performance and duration of currently fielded batteries for dismounted Soldiers," said Christopher Hurley, a lead electronics engineer in the Command, Power and Integration Directorate, or CP&ID, of CCDC's center for Command, Control, Communications, Computers, Cyber, Intelligence, Surveillance, and Reconnaissance -- or C5ISR.

"The capabilities of these materials have been proven at the cell level to substantially increase energy capacity. We're aiming to integrate those cells into smaller, lighter power sources for Soldiers," Hurley said in an ARMY news release. "Our goal is to make Soldiers more agile and lethal while increasing their survivability."

With the Army focused on modernization and the need to add new capabilities that require greater power, the battery weight will continue to increase and have a detrimental effect on Soldiers' performance during missions, Hurley said. "The C5ISR Center is helping the Army get ahead of this problem by working on advanced materials like silicon anode," said Hurley, noting that incorporating silicon-based anodes into Army batteries will cut their battery weight in half.

The advanced battery technologies need to be incorporated into the Army's Conformal Wearable Battery, or CWB, which is a thin, flexible, lightweight battery that can be worn on a Soldier's vest to power electronics. Results are promising—prototypes of the updated silicon anode CWB delivered the same amount of energy with a 29 percent reduction in volume and weight.

The military counts on commercial battery suppliers to build what it needs; however, the needs of civilian consumers and Warfighters are different, said Dr. Ashley Ruth, a Command, Power, and Integration Directorate (CP&ID) chemical engineer. Operating at extreme temperatures and withstanding the rigors of combat conditions means that the electrochemical composition in battery components required for the military and consumer sectors is different. "An increase in silicon content can greatly help achieve the high energy needs of the Soldier; however, a great deal of research is required to ensure a suitable product. These changes often require entirely new materials development, manufacturing processes, and raw materials supply chains," Ruth said.

One of the highest priorities will heavily emphasize increasing power requirements, specifications, and standards. "Follow-on improvements at the component level have improved capacity by two-fold. Soldiers want a CWB that will meet the added power consumption needs of the Army's future advanced electronics," said Ruth.

Power Division researchers are integrating the silicon anode CWB with the Army's Integrated Visual Augmentation System, or IVAS, a high-priority augmented reality system with next-generation capabilities for Solider planning and training. Because IVAS is a dismounted Soldier system that will require large amounts of power, the Army is in need of an improved power solution.

"A two-fold increase in capacity and runtime is achievable as a drop-in solution," Ruth said. "Because of the widespread use of rechargeable batteries, silicon anode technology will become a significant power improvement for the Army."

Powerful Supercapacitors Are Possible Using a Graphene-Hybrid Material
May 09, 2021