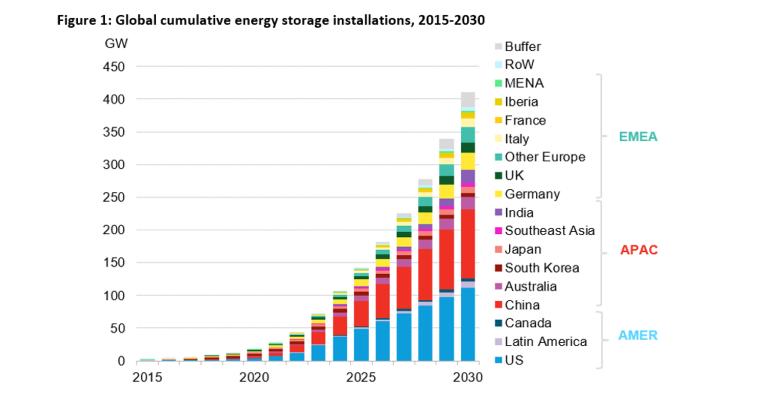 “MENA” refers to the Middle East and North Africa; RoW” refers to the rest of the world. “Buffer” represents markets and use cases that BNEF is unable to forecast due to lack of visibility.
US, EU policies bring fresh optimism to BloombergNEF’s global energy storage deployment forecast.

Energy storage installations around the world are projected to reach a cumulative 411 gigawatts (GW) —or 1,194 gigawatt-hours (GWh)—by the end of 2030, according to the latest forecast from research company BloombergNEF (BNEF). That is 15 times the 27GW/56GWh of storage that was online at the end of 2021, according to a BloombergNEF news release.

BNEF describes itself as a strategic research provider covering global commodity markets and the disruptive technologies driving the transition to a low-carbon economy. Its 2H 2022 Energy Storage Market Outlook sees an additional 13% of capacity by 2030 than previously estimated, primarily driven by recent policy developments. This is equal to an extra 46GW/145GWh

The most notable new policies include the US Inflation Reduction Act (IRA), a landmark piece of legislation providing more than $369 billion in funding for clean technologies, and the European Union’s REPowerEU plan, which sets ambitious targets to reduce reliance on gas from Russia.

An estimated 387GW/1,143GWh of new energy storage capacity will be added globally from 2022 to 2030—more than Japan’s entire power generation capacity in 2020. The US and China are set to remain the two largest markets, representing over half of global storage installations by the end of the decade. Europe, however, is catching up with a significant ramp-up in capacity fueled by the current energy crisis.

The anticipated acceleration of the US market follows the passage of the Inflation Reduction Act in August 2022, with large volumes of funds allocated to wind, solar and storage tax credits. The law will drive roughly 30GW/111GWh of energy storage build from 2022 to 2030, according to BNEF. However, while the new tax credit policy supports more growth based on BNEF’s long-term forecast, supply chain constraints cloud deployment expectations until 2024.

Russia’s invasion of Ukraine has had a clear impact on energy storage deployments in Europe. Record electricity prices are forcing consumers to consider new forms of energy supply, driving the residential storage market in the near term. The significant utility-scale storage additions expected from 2025 onwards align with the very ambitious renewable targets outlined in the REPowerEU plan and a renewed focus on energy security in the UK. BNEF has more than doubled the number of energy storage deployments from 2025 to 2030 across Europe from previous forecasts.

Although the scale-up of global energy storage capacity is imminent, supply chain constraints could slow additions. On top of pandemic-related supply chain issues, inflation, high transport costs and raw material prices have made battery cells more expensive over the last year. Meanwhile, projects face long lead times to finance, develop and commission. In 2022, supply chain disruptions have resulted in lower utility-scale storage additions, and while a lot of these pressures may ease next year, scaling up for a market expected to add almost 11 times more gigawatt-hours in 2030 than 2021 will certainly come with challenges.

Helen Kou, an energy storage associate at BNEF and lead author of the report, stated: “The energy storage industry is facing growing pains. Yet, despite higher battery system prices, demand is clear. There will be over 1 terawatt-hour of energy capacity by 2030. The largest power markets in the world, like China, the US, India and the EU, have all passed legislation that incentivizes energy storage deployments.”

Regionally, Asia Pacific will lead storage build on a megawatt-basis by 2030, with momentum driven by the rapidly scaling market in China. But the Americas will add more capacity on a megawatt-hour basis as storage plants in the US usually have more hours of storage. Europe—even with additional upside from recent policy advances—the Middle East and Africa are set to lag behind their counterparts.

BNEF’s forecast suggests that the majority of energy storage build by 2030, equivalent to 61% of megawatts, will be to provide so-called energy shifting – in other words, advancing or delaying the time of electricity dispatch. Co-located renewables-plus-storage projects, in particular solar-plus-storage, are becoming commonplace globally.

Customer-sited batteries—both residential, and commercial and industrial—are also expected to grow at a steady pace. Germany and Australia are currently the leaders in this space, with sizeable markets in Japan and California too. BNEF forecasts energy storage located in homes and businesses will make up about one quarter of global storage installations by 2030.

Yayoi Sekine, head of energy storage at BNEF, stated: “With ambition the energy storage market has potential to pick-up incredibly quickly. The nuts and bolts of how energy storage projects will materialize as result of big policies like the US Inflation Reduction Act still need to be sorted. However, companies are already scaling up operations to capture the upside.”

Rapidly evolving battery technology is driving the energy storage market. Lithium-ion batteries account for the majority of installations at present, but many non-battery technologies are under development, such as compressed air and thermal energy storage. Nevertheless, BNEF expects batteries to dominate the market at least until the 2030s, in large part due to their price competitiveness, established supply chain and significant track record. If new technologies can successfully outcompete lithium-ion, then total energy storage uptake may well be larger.