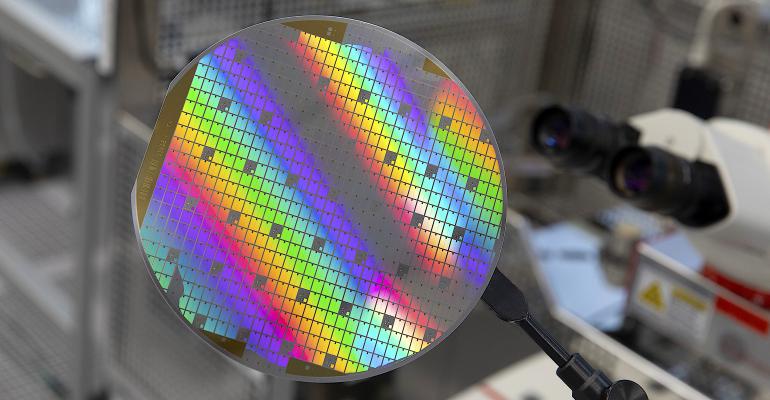 A Bosch silicon carbide semiconductor wafer.
Volume production means that 2022 is the year that silicon carbide power electronics graduate from being a technology of the future.

We’ve followed the promise of silicon carbide (SiC) power electronics to improve electric vehicle efficiency for a while, and now it looks like 2022 is the year when this technology moves into the mainstream.

We’ve discussed how Lucid Motors has cast its lot with silicon carbide in its 900-volt EVs, and that company began trickling out its first production Air luxury sedans by late 2021. Faster switching frequencies and higher voltage capacity make SiC an attractive upgrade from conventional silicon semiconductors for EV power electronics.

But ubiquity is achieved for a technology when suppliers are offering it to any companies that want to place an order, and that’s where Bosch is today. “Our order books are full, thanks to the boom in electromobility,” said Harald Kroeger, member of the board of management of Robert Bosch GmbH. “We want to become a global leader in the production of SiC chips for electromobility.”

The announcement of production availability comes two years after Bosch said it would push ahead with the development of SiC chips and enter production. The company has been making the semiconductors at a small scale since early 2021 using a complex manufacturing process. These chips went to automakers for validation purposes.

Now, the company is aiming for production on a huge scale – the hundreds of millions – with volume production starting in 2022. Bosch has already added an extra 10,764 square feet to the clean-room space at its wafer fab in the Reutlingen plant in 2021 and plans an additional 32,292 square feet by the end of 2023. 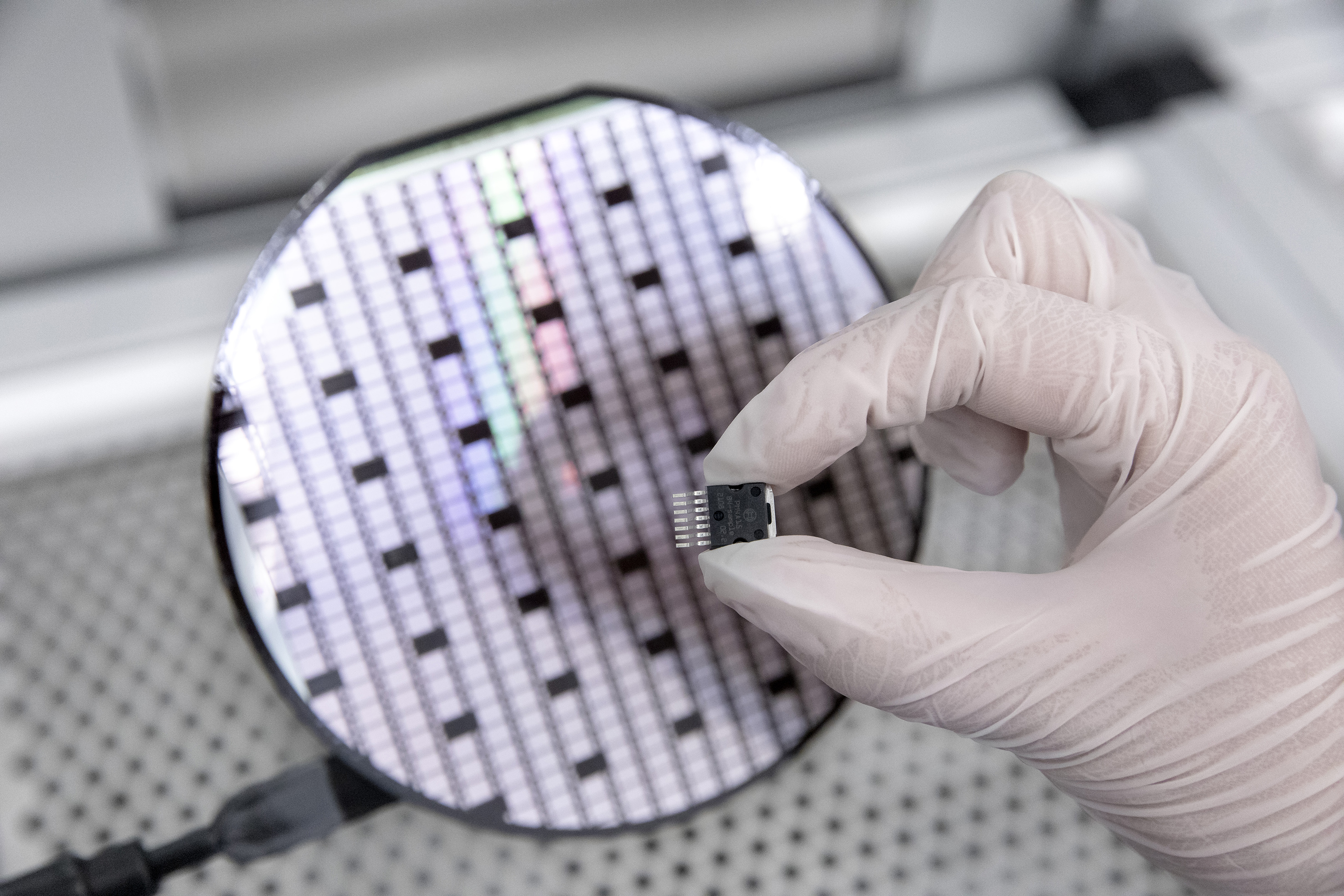 A semiconductor chip made from a silicon carbide wafer.

Bosch is not only employing its own processes for creating the SiC chips, but it plans to fabricate them on 8-inch wafers (how funny is it to consider measuring the painstakingly precise fabrication of cutting-edge semiconductors by “inches”?) rather than today’s 6-inch wafers to accelerate the economies of scale for SiC technology. “By producing on larger wafers, we can manufacture significantly more chips in one production run and thus supply more customers,” Kroeger says.

They will need this capacity because French market research company Yole Développement forecasts that the SiC market as a whole will grow on average by 30 percent a year to over $2.5 billion by 2025. The auto industry will account for around $1.5 billion of that. 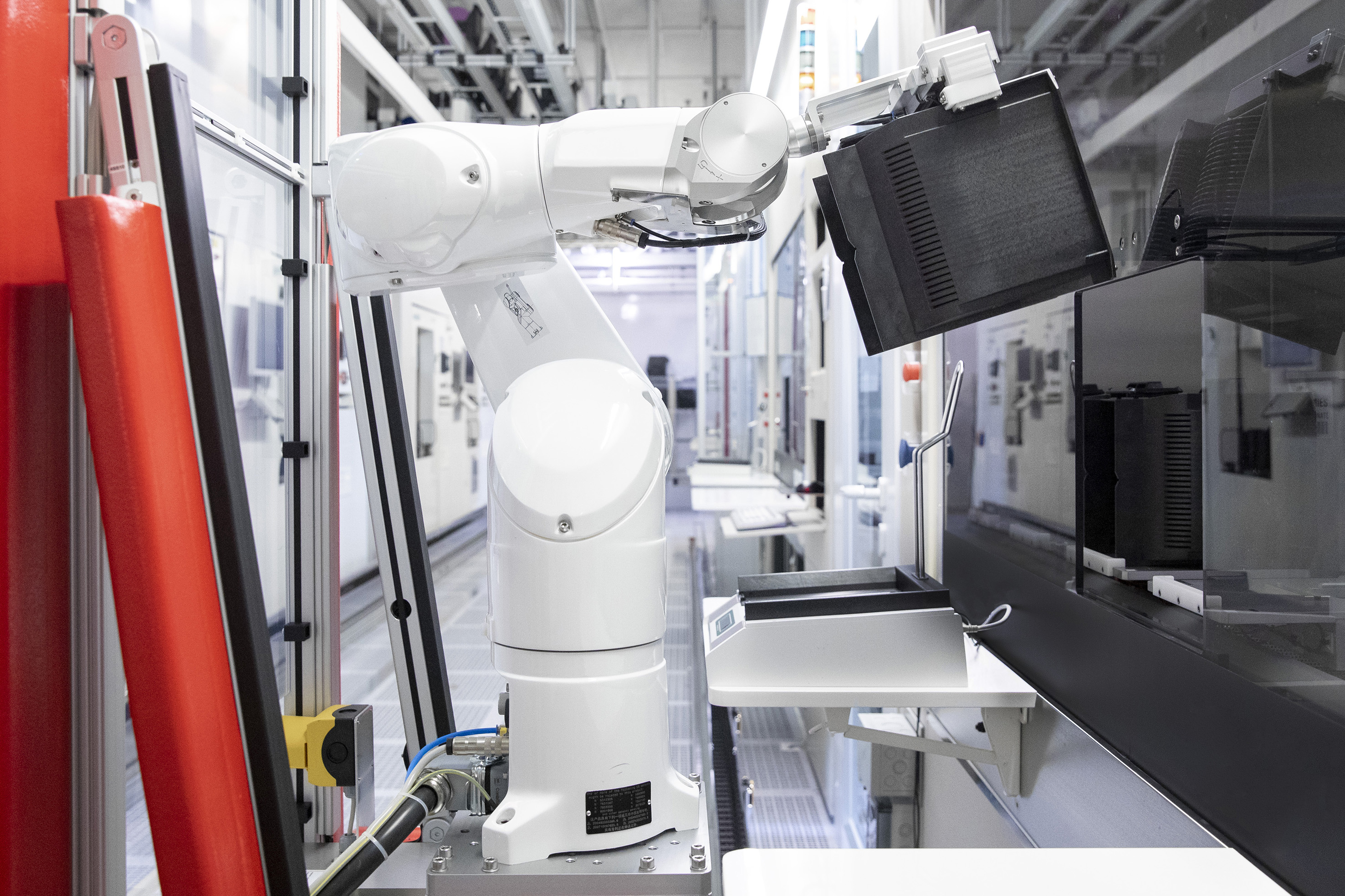 A processing robot in the Bosch silicon carbide fabrication facility.

The expectation is that improvements in vehicle efficiency will be as important as improvements in battery capacity in boosting electric driving range for future EVs. “Silicon carbide power semiconductors make particularly efficient use of energy. This material’s advantages really come to the fore in energy-intensive applications such as electromobility,” Kroeger says. He cites the advantage of SiC over conventional silicon at about 6 percent.

Every little bit of efficiency counts which is why automakers will likely beat a path to Bosch’s door for these chips made with now-mature SiC technology. Leaving us to identify a replacement “technology of the future.”