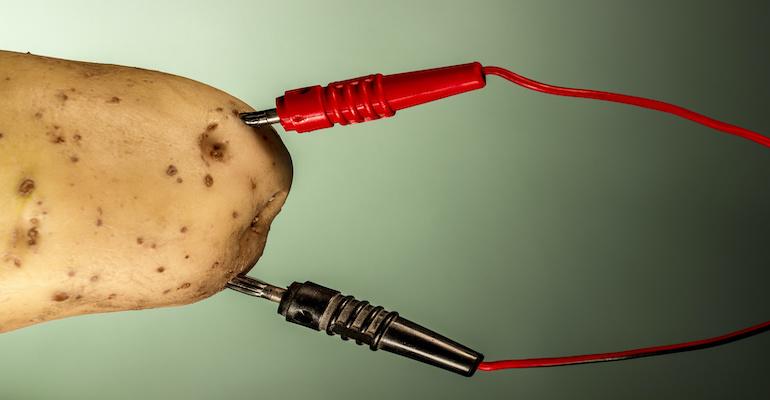 Making a potato battery is easy but making a GLaDOS takes a bit more work.

Many of us will remember building a potato battery as a science project in grade school. These projects were based on the principle that electricity flows from negatively charged electronics to a positively charged substance. For example, electricity can be produced when an ordinary galvanized – coated in zinc – comes in contact with a copper penny. The latter, which is positively charged, will accept those electrons from the zinc, thereby creating an electric circuit.

Interestingly, the earth itself is another great example of an organic battery. Earth or telluric current is an electric current that moves underground or through the sea. Currents arise naturally in the earth from the chemical composition of certain minerals as well as temperature differences such as those near volcanoes. Electric currents are generated when a portion of the earth interacts perpendicular to the Earth’s magnetic field.

But let’s return to our spud battery. Why does it work? Starchy vegetables like a potato contain a mild bit of phosphoric acid H3PO4, which serves as the chemical solution necessary to transfer electrons back and forth between the metal plates. By adding the right types of metal to a potato, you can make a battery.

There are many ways to wire-up a potato battery. One way is to simply measure the mere presence of a potential voltage difference – essential for current flow – by sticking the two measurement prongs of a voltmeter into the potato.

The other way is to use the potato as a battery to power something, like a digital counter or other very low powered devices. All that’s needed is a potato, some insulated copper wire (one black and one red-coated wire), a galvanized nail or bolt-nut, and a cooper insert or penny coin. First, secure the black wire to the bolt-nut and push it into the potato. Second, secure the red wire to a copper strip (or penny) and also insert it into the potato. Make sure the poles are separated and not touching. Finally, connect the unconnected wires from each into a very low powered device, like a digital counter. Voilà, instant electricity.

Today’s grade school students might want to do more than make a potato battery. Some might want to create a potato-battery powered Genetic Lifeform and Disk Operating System (DOS) or GLaDOS from the video game developed by Valve called Portal 2. In the game, GLaDOS is an artificially intelligent (AI) computer system that has also appeared Lego Dimension. Gamers familiar with Aperture Science, the name of the science research lab appearing in Portal and Portal 2, will recognize GLaDOS as the artificial life responsible for testing and maintenance in the lab. GLaDOS is killed in the first game but returns in the sequel in which she is temporarily stuck on a potato battery.

A few years ago, Calcaware posted a PotatOS design onto MakerBot Thingiverse. The 3DPrinted eyepiece to be pushed into a potato contained holes for LEDs, black wires, red LEDs, and a yellow eye-lens. Instead of being powered by an actual potato battery, the device was powered by a CR2032 battery and a yellow LED to the center for a light-up eye effect. Calcaware noted that an Arduino Gemma or Adafruit equivalent could be used to make it sound activated.

Would it be possible to use potato batteries to actually power a GLaDOS? To answer, consider a similar question once posed on Reddit by u/c3h8o2 concerning how many potatoes would it take to power a Raspberry Pi Zero (Pi0). Another user, spthirtythree, replied with these calculations: “According to this page, a potato is good for 0.5 V and 0.2 mA. The minimum power for a Raspberry Pi is 5 V and 1.2 A - note this won't power all of the USB ports. So you'd need (5 V / 0.5 V) 10 potatoes in series to get the voltage, and around (1200 mA / 0.2 mA ) 6000 potatoes in parallel to achieve the current. That leaves you with 60k potatoes.”

That’s a lot of spuds. It’s far too many to power GLaDOS with a single potato or even several sake fulls of the same. Still, with every shrinking AI-based semiconductor electronics, near-threshold voltage (NTV) techniques, wired connections (no RF or wireless), and other power reducing designs, a GLaDOS like computer may exist in the not to distance future. Aperture Science – “We do what we must because we can.”