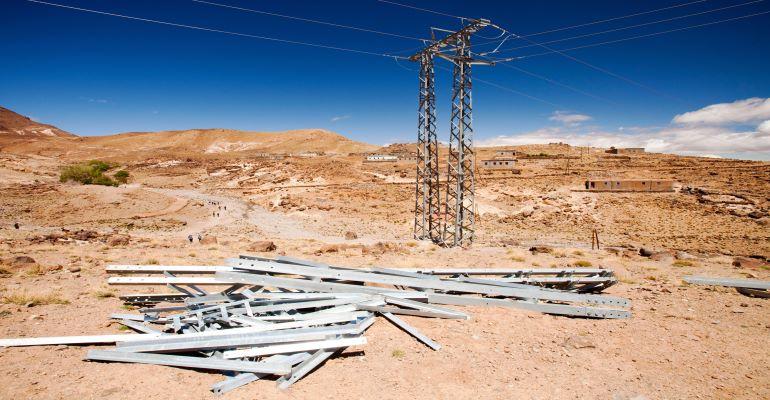 Electricity comes to a Berber village near Jebel Sirwa in the Anti Atlas mountains of Morocco, North Africa.
A recent APEC session discusses ongoing issue of establishing affordable, reliable electricity in underserved areas such as Africa.

Residents of the United States and other developed global areas may gripe when their Internet access is lost or when a weather event causes an electrical outage, but in many remote and underdeveloped global regions, electricity access remains spotty or non-existent even without outage events. A recent APEC (Applied Power Electronics Conference) session discussed the ongoing challenges of trying to develop electrical infrastructure in underserved regions such as Africa.

Jelena Popovic, the vice-chair of IEEE Empower a Billion Lives (EBL) II and Associate Professor at the University of Twente in The Netherlands, said during a conference session that global electricity access remains iffy in underdeveloped regions such as Africa. She presented dire statistics on the energy issues encountered by vast segments of the world’s population.

“About 759 million people lack access to electricity, and over 2 billion people rely on wood, coal, or animal waste” Popovic told the audience. She added that many of these energy sources are neither sanitary nor healthy.

“If you use a kerosene lamp, you are exposed to indoor air pollution, as well as increase the likelihood of an accident should the kerosene lamp tip over,” Popovic said. “There is also the risk of child poisoning.”

Popovic noted that in places like Africa, governmental and private efforts to expand the electric grid have had mixed success, due to the fact many poor residents cannot afford to pay for electricity, not only in the rural region but in cities as well.

“More than 100 million urban Africans live under an electric grid, but lack an electricity connection,” she said. In less populated regions, Popovic recommended the formation of renewable energy grids, such as solar power. For more densely populated areas, she called for the formation of more mini-grids, properly scaled to the energy needs and affordable to poorer residents.

The IEEE has been active on this front, having formed an initiative in 2018 called “Empower A Billion Lives,” an open global competition that challenges groups of all sizes and business types to develop sustainable, scalable energy solutions to improve energy access in underdeveloped regions. The original competition drew over 450 teams from 70 countries, participating in events that included five regional competitions (China, India, Africa, Europe, and the US), ﬁeld demonstrations (in Rwanda, Uganda, Malaysia, Nepal, India, Tanzania, China, Nigeria, Cambodia, Singapore, Madagascar, Kenya, and the Ivory Coast), and ending with a global ﬁnal in Baltimore in October 2019.

A second session speaker, Lichen Chang, President of the IEEE Power Electronics Society (PELS) and Professor Emeritus at the University of New Brunswick, Fredericton, Canada, added that several IEEE groups are engaging with the Empower a Billion Lives initiative to share ideas and extend outreach activities.