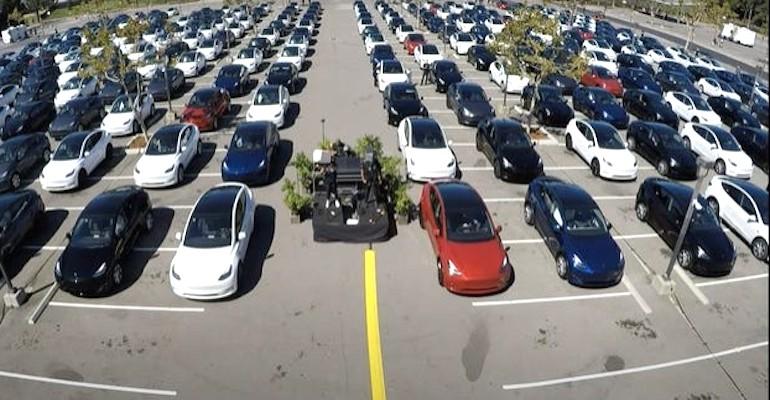 The Tesla parking lot at the Fremont, Calif. plant was the location of the studio audience. More than 300,000 watched the Battery Day presentation online.
Elon Musk's mission to accelerate the time to sustainable energy with technology.

Elon Musk  is on a mission to accelerate the time to sustainable energy. Okay, so he is also on a mission to colonize Mars and to provide free internet access to every corner of the globe, among other things. But, the focus of the Tesla Annual Shareholders Meeting and Battery Day on Tuesday, September 22, 2020, was energy and energy storage.

The format of the meeting was strange. Live attendees sat socially distanced in their (Tesla) cars in the Fremont, California plant’s parking lot, while Musk and other speakers took the stage that was erected in front of the factory. A large screen was placed behind the speakers to project images and illustrations. Instead of applause, attendees honked their horns in approval of what was being said. More than 300,000 watched live via the Internet.

For Tesla fans, there was a lot to approve of. After the business of the shareholders meeting—primarily conducted by the corporate suites—Musk appeared dressed in a black T-shirt and black jeans, joined on the stage by the similarly attired Drew Baglino, vice president of powertrain and energy engineering. “The three parts of a sustainable energy future are sustainable energy generation, storage, and electric vehicles,” said Musk. “So, we intend to play a significant role in all three,” he added.

To do so will require an almost unimaginable scale-up of battery production. Today, Tesla’s gigafactories can produce about 39 gigawatt-hours (GWh) per year, with plans for 100 GWh by 2022, and an eventual 150 GWh when completed. But, according to Musk, to meet the needs of electric vehicles (EV) and grid storage by 2030 will require terawatt scale battery production—10 terawatt-hours (TWh) per year, by Tesla’s estimates. (A terawatt is 1,000 gigawatts). That’s a problem. “Today’s batteries can’t scale fast enough, they’re just too small,” said Musk.

Musk and Baglino outlined a laundry list of new technologies and innovations that could bring the company’s energy storage manufacturing capability to 3 TWh by 2030. To get there requires a re-examination of almost every part of battery raw material production and processing, battery configuration, and anode and cathode production, as well as improvements in energy efficiencies of vehicles themselves. 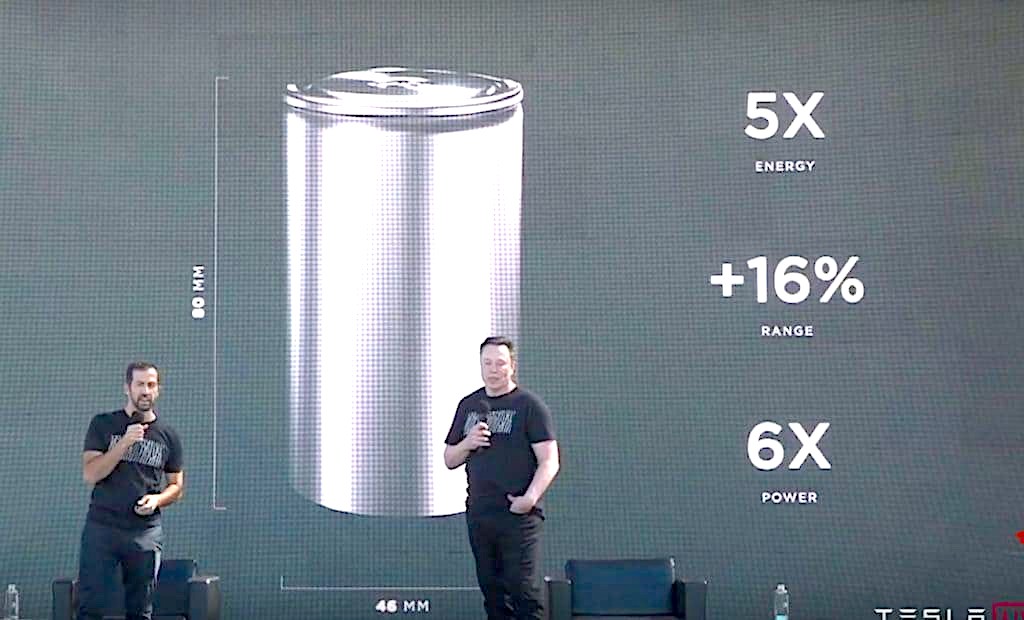 Tesla started out in 2008 with 18650 cells—18 mm diameter and 65 mm long. Eventually, the company began switching to 2170 cells—21 mm diameter and 70 mm long. The bigger cells could provide more energy but as cells get larger they become more prone to overheating, due to the resistance of electrons to traveling the distance from the electrode to the tabs that are used to connect to the battery to its external terminals.

Tesla examined the diameter and length dimensions of cells to optimize energy storage. It was determined that a 4680 (46 mm diameter and 80 mm long) cell provided an optimum. Normally, this size battery would have thermal problems, but Tesla held an ace—the company has developed a tabless design that effectively uses an entire edge of the electrode to conduct electrons, rather than individual metal tabs. In addition to greater energy storage, the 4680 cell with its tables design eliminates the need for the production line to stop to add tabs, increasing production speed, and reducing the potential for manufacturing defects. Removing the tab, “…removes the thermal problem from the equation and allows us to go to the absolute lowest cost form factor and the simplest manufacturing process,” said Baglino.

“We are starting to ramp up manufacturing of these cells at our pilot 10 GWh production facility,” said Baglino. There are a few challenges that are expected as production rates increase, but Musk expects the pilot plant to be fully up to speed within the next 12 months. Tesla expects a five-times improvement in energy storage and a six-times increase in power from the new 4680 cells. 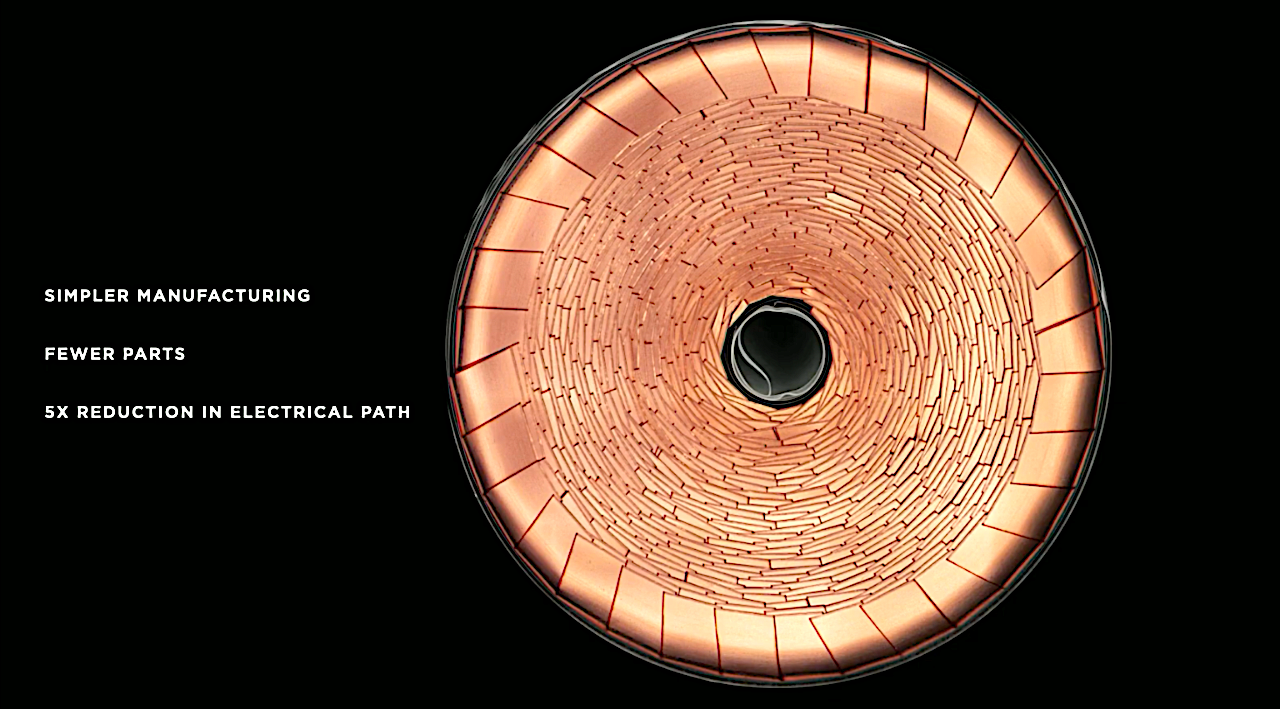 The tabless design of the Tesla 4680 cell makes possible its high performance and good thermal characteristics.

For a traditional lithium-ion electrode, a slurry of materials is spread on an aluminum or copper substrate and then dries in a series of enormous ovens. This requires huge amounts of both time and energy. But Tesla aims to press dry powdered electrode materials using giant rollers. The process is based upon one created by Maxwell Technologies; a company recently purchased by Tesla. The big advantage is an up to 7 times increase in output per battery production line. “Tesla is aiming to be the best at manufacturing of any car company on Earth,” said Musk. Tesla reports the dry cathode reduces the line footprint to the extent that a 1 TWh sized plant could fit in the same space as a current 150 GWh plant.

Others have been working with various amounts of silicon mixed with graphite for lithium-ion battery anodes. Silicon can hold more lithium ions than carbon graphite and is much cheaper, but has some problems. “The challenge with silicon is that it expands four times when charged with lithium,” according to Baglino. This can cause cracking and reduce the capacity of the anode. Most who have worked with silicon start with silicon dioxide—sand. Tesla instead has started with metallurgical raw silicon and then stabilizes the surface with, “…an elastic ion-conducting polymer coating that’s applied through a very scalable approach,” said Baglino. “We can increase the range of our vehicles an additional 20%,” said Baglino, while also producing a cheaper anode, reportedly about 5% less in dollars per kWh. A lack of additional details makes it difficult to determine the viability of the Tesla silicon anode.

The chemistry of the cathode has a significant effect on the performance and price of a lithium-ion battery. High amounts of nickel in the cathode provides high energy densities and power outputs. Nickel mining is typically a byproduct of copper mining and is rarely optimized. This means that it requires large amounts of sulfuric acid and water—a recipe for environmental disaster. Instead, Tesla proposes to eliminate the nickel sulfate phase in the mining and to use nickel ore in the development of its high nickel content cathodes.

Nickel cathodes, while producing maximum performance can be unstable, which is why cobalt is added to the mixture. Cobalt stabilizes the cathode structure but is both expensive and is sourced largely from a politically unstable country with questionable and sometimes unethical labor practices. Right now, Tesla uses cathodes made from nickel, cobalt, and aluminum (NCA) for its EVs and nickel, cobalt, and manganese (NCM) for its stationary power storage batteries. It also has some much cheaper lithium, iron, and phosphorous (LFP) cathodes supplied for its Chinese versions of the Model 3. Nickel cathodes are about 50-60% better than LFP, but for medium-range EVs (less than 300 miles), LFP can be used.

Tesla says that eliminating cobalt from a high-nickel cathode improves costs by 15% on a per kilowatt-hour basis. It's not exactly clear how Tesla plans to make an all-nickel cathode work, but the company said that when it builds its own cathode plant in the US, it will be able to reduce the cost of processing by 76%, while also reducing the amount of water needed for the raw materials. By building its own cathodes, Musk also claims that recycling the batteries after use will be easier and more economically viable.

Like nickel, mining lithium uses vast amounts of water that must be treated before it can be returned to the environment. “Lithium is like oil—there’s lots of lithium everywhere,” said Musk. Much of lithium mining is done in traditional ways and Musk hopes to change that for lithium supplied to his battery plants. The company has purchased a 10,000-acre site in Nevada where it will separate lithium from clay deposits through a new, much simpler process and ship the lithium directly to the company’s Nevada Gigafactory. Musk claims that there is enough lithium just in Nevada to supply all of the US EV needs.

Typically, in an EV, battery cells are grouped into modules that are then combined into packs. Packs go into protective casings, often under the floor of the car. The result is heavy, which degrades performance and range.

At the Battery Day presentation, Musk and Baglino described a new Tesla idea. The company already has the world’s largest high-strength aluminum casting machine at its Fremont plant. The idea is to make the front and rear sections of the car as single cast aluminum pieces and then tie them together with the pack, located between them. The pack will act as a honeycomb structure, with shear plate aluminum skins on the top and bottom surfaces and the 4680 cells located between the plates to create a stiff structure. There will be no modules or separate case and the pack itself is a stressed structural element that ties together the front and rear of the car. Tesla expects this configuration will give a 14% range increase while requiring 370 fewer parts to build. 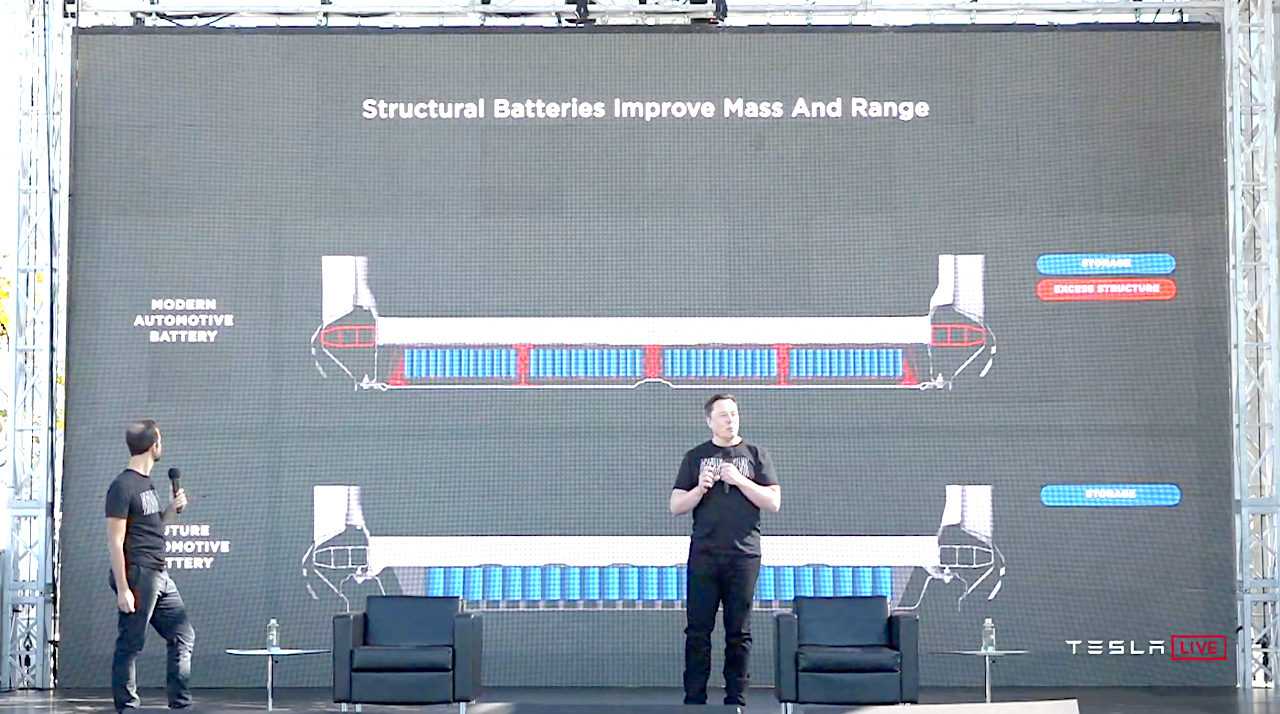 Musk and Baglino provide details on the structural battery concept that Tesla will use on future models.

What Does it All Mean?

If, and it is a big if, Tesla could combine each of the innovations it described on Battery Day, it expects that, compared to today’s Tesla EV, range would increase by 54%, cost at a pack level would by 56% less and 69% lower investment in manufacturing per GWh. Musk said that it would take 1 year to 18 months to start to realize these improvements and about 3 years before they reach their full effects. This would place the pack cost well below the mythical $100/KWh that most analysts quote as necessary for EVs to compete on price with gasoline powered cars.

A bigger significance to Tesla’s plans is what it means to the rest of the auto industry. Right now, EVs make up less than 1% of the vehicles on the road. Companies like Volkswagen, Ford, GM, BMW, Mercedes, Hyundai, Kia, Geely, and others are beginning to talk a good EV game, yet none of them are pushing outside of the existing status quo of battery materials and manufacturing the way that Tesla is. Most seem delighted that they have been able to build an expensive EV that works within the limits of existing materials and architectures.

Musk has expressed a clear view that by 2030 we will need to be capable of producing 10 TWh of battery storage capacity to meet electrified transportation demands, and that effectively no pathway presently exists to get there. By going to first principles and examining each step of the materials and manufacturing process, he and his team at Tesla have identified where improvements can and must be made. Are the others capable of following his lead?