How Viable are Long-Haul Electric Trucks? 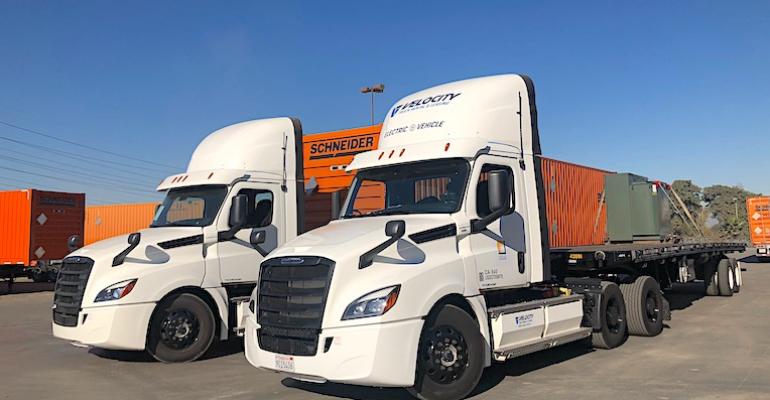 Even though long-haul diesel trucks are just a small fraction of the total number of motor vehicles, they are responsible for more than 20% of US transportation-sector greenhouse gas (GHG) emissions.  Because the transportation sector is the largest contributor of CO2 emissions associated with the US economy, electrification of 18-wheelers is becoming an increasing priority.

Trucking hauled 72.5% of freight in the US in 2019 and the nation’s 4 million long-haul Class 8 trucks, those with a Federal limit of 80,000 pounds gross vehicle weight, accounted for the majority on interstate and cross-country shipping. While local delivery companies like FedEx, UPS, Amazon, and even the Post Office are rapidly moving to medium-duty electric trucks, the heavy-duty Class 8 trucks have lagged behind.

That’s not to say they aren’t getting attention—most notably the Tesla Semi which was unveiled in 2017 and is expected to hit the market by the end of this year. Freightliner’s eCascadia electric semi will also go into production at its Portland, Oregon plant in 2021, while other offerings from companies like EV giant BYD and newcomer Nikola Motors are in the wings.

Related: Examining the Role of Electric Vehicles in China’s Airpocalypse

Unlike medium-duty trucks that usually operate over relatively short distances and from a centralized home base where they can be regularly recharged, long-haul electric trucks often have no home base and maybe on the road for months or even years at a time. That means they need a much larger battery pack, not only to carry the extra payload compared to a local delivery truck but also to allow the semi to travel long distances between charging. The charging requirements are also much different, as they need to charge quickly at highway truck stops instead of overnight as might be possible with a daytime delivery fleet.

The larger battery of a long-haul truck brings its own issues. The bigger the battery, the greater the cost and weight. The amount of energy needed on-board an electric long-haul truck will be 6-10 times the capacity of a passenger EV—likely more than 600 kilowatt-hours (kWh) for a 300-mile range between charges and weighing at least 8,000-pounds. One challenge will be to build a truck that provides heavy cargo payloads without exceeding the 80,000-pound Class 8 limit.

Researchers from the Department of Energy’s (DOE) Lawrence Berkeley National Laboratory (Berkeley Lab) and the University of California, Los Angeles published a new study that examines the changes needed in public policy to help long-haul trucking in a transition from diesel to electric.

Several future scenarios, such as reductions in battery costs and improvements in truck aerodynamics were also examined in the study. The researchers showed that these factors, along with monetized benefits of reduced pollution, “…would result in a 50% per mile lower total cost of ownership compared to a diesel long-haul truck by 2030.”

Previously, Berkeley Lab scientists have done extensive research on the impact of diesel trucks on air quality and public health, particularly in disadvantaged communities. In addition to gains in addressing climate change, a transition away from diesel and to electric power could help in avoiding premature deaths due to local vehicular pollution and diesel particulates, which have been shown to disproportionately affects communities of color. “If we can move away from diesel-dependent heavy-duty vehicles, we have a chance at significantly reducing greenhouse gas and particulate emissions from the transportation sector,” said Phadke.

Indeed, the overall conclusion of the DOE study is that it’s the lack of appropriate policies around adoption incentives, charging infrastructure, and electricity pricing and not limitations in battery and EV technology that is holding back the widespread electrification of commercial long-haul trucking fleets. “Given the massive economic and environmental benefits, the case for long-haul electric trucking is stronger than ever before,” said Berkeley Lab Research Scientist Nikit Abhyankar in the news release. “Enabling policies such as adoption and charging infrastructure incentives, sales mandates, and cost-reflective electricity pricing are crucial.”